Today we're spotlighting the publishing company NubeOcho and two of their books,

& My Dad Is A Clown (Jose Carlos Andres, Natalia Hernandez).

Read on for more about NubeOche, reviews of these books, plus an interview, and giveaway!

YABC:   Love how BANG BANG I HURT THE MOON addresses guns in a way that isn't preachy.  What was the inspiration behind this book?

Nicholas and Charles are the two sons of one of my close friends. They are like nephews to me. I remember it was a summer night, with a huge full moon in the sky, when Nicholas looked at the moon with a rascal face, pointed with his hands at it and said: Bang Bang I shot the moon!

I tried to control my laughter and explain to him that it was not nice to shoot at the moon. That it’s not nice to shoot at all. And then… the story was born. The message had to be subtle, and a preachy story is never fun. A story in which the union makes the strength and small animals will help Nicholas, Charles and their mom to move the moon back to the sky.

YABC:    I'm usually not a fan of bilingual books with direct translations but MY DAD IS A CLOWN-MI PAPA ES UN PAYASO does a great job with both languages without one being distracting.  How do you handle the translations without being a distraction?

In picture books, it’s a careful balance between text and art:  if you put too much text, there is not much space for the illustration. Similarly, for bilingual books with both languages presented on one page, you want to make sure that it’s not distracting to the reader to see two languages – you don’t want someone to begin reading in one language and then the other and miss the story. So in MY DAD IS A CLOWN – MI PAPA ES UN PAYASO, NubeOcho created a design in which there are two different colors. Black for the English text, and red for the Spanish one.  So, you could read the book paying attention only to the English. Or only to the Spanish. And as soon as you choose your language/color you don’t get ’’diverted’’.

We usually publish our books in two separate editions: one in English, and the same book in Spanish. But this book is about sexual diversity and we thought that by including two languages at the same time, we’d reach out to an even broader audience.

YABC:   Both BANG BANG I HURT THE MOON and MI PAPA ES UN PAYASO deal with sensitive subjects. What other subjects do your books deal with?

NubeOcho Books also tackle exclusion in “I Wasn’t Invited to the Birthday”, environment protection in “The Galinos”, diversity and accepting the others in the “That’s Not Normal”, selective mutism and shyness in “Carlota Wouldn’t Say Boo”, gender equality in “Candy Pink”…

We are very interested in feelings that are difficult for kids to understand. We try to help them overcome fear, jealousy or exclusion. But we never forget to weave in a nice story, make it fun to read, and of course bring on board the best European illustrators.

YABC:   Love the illustrations too!  Who are your illustrators?

We work with some of the most important illustrators in Spain. Like the National Award winner for illustration Emilio Urberuaga, and the famous Adolfo Serra or Olga de Dios. But we work too with some important European illustrators like the German Sonja Wimmer or the French Laure du Fay. And of course we have some Latino illustrators and authors like Pato Mena (from Chile) or the Argentinean Betania Zacarias. We always strive to find new talents and give a chance to some amazing young illustrators to be part of our team as well.

YABC:   What do you want children to take away from your books?  Is there a theme?

The most important is that kids have fun. We want them to enjoy the illustrations and the stories. But we try to share values at the same time. Then, when the theme could be a bit difficult for them to understand, we try to create a story to introduce it, without forcing the message or preaching.  We hope that our books encourage conversation with parents, teachers, caregivers.

For instance, if a child feels excluded because they were not invited to a birthday, they can read a story to understand that we cannot always be in every party.

“Raccoon Wants to Be First” for example tackles another issue, which is competitiveness. Sometimes we feel that if we are not first at everything, we feel disappointed in ourselves. So this book helps children understand that the important thing is enjoying the experience and the ‘’journey’’, and that life is not a competition.

YABC:   What future books can we expect?

In Spring 2017, get ready to laugh with “Bow-Wow-Meow” about a dog that doesn’t want to be a dog (and we will talk about diversity, understanding and being yourself); “The Untold Story of the Tooth Fairy”, an original traditional story with a twist (the Tooth Fairy and a little mouse and other animals that will help her); “The Perfect Siesta” and the huge responsibility of waking someone up; “Ozzy the Ostrich” talks about defending ourselves (and it will connect with bullying and respect as we did with “That’s not normal”), and finally a book for kids with divorced parents: “The Mirror in Daddy’s House/The Mirror in Mommy’s House”, a story that can open from one side or the opposite. In the middle you will see the union, the magical mirror in both houses that the parents still share: the child. Luis Amavisca of NubeOcho is a well-known visual artist and writer for kids in Spain. He has worked and written about equality, solidarity, environment and non-violence. He has published several books including “Princess Li” and “The Galinos.” Esther Madrid studied Fine Arts and teaches Visual Education and Fine Arts. She has published books with the main publishers in Spain like Anaya.
Meet Bang Bang I Hurt The Moon! 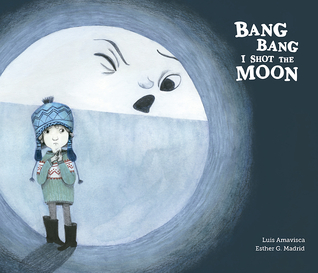 That night, Nicholas was making gun shapes with his hands:

"Bang Bang I shot the moon," he said pointing at the moon.

No one believed it when suddenly the moon fell into the family's garden.

The moon was not injured but fell down because of the fright.

Click here to see YABC's review of Bang Bang I Hurt The Moon!

Meet My Dad Is A Clown creators! José Carlos Andrés is a famous author in Spain. He is a professional clown and children's theater actor.

Meet My Dad Is A Clown! 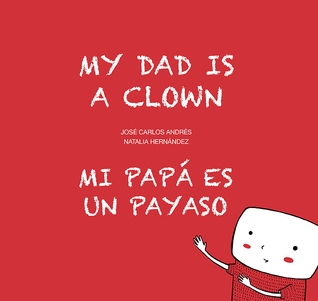 From the author of The Journey of Captain Scaredy Cat.

Click here to see YABC's review of My Dad Is A Clown!

NubeOcho was founded as a publishing house committed to values and diversity; their books each promote respectful attitudes towards all types of diversity. Launched in Spain five years ago, NubeOcho began distributing their books in the US earlier this year with some bilingual titles but most available in both English and Spanish editions.

More information can be found at NubeOcho.com.

Bang Bang I Hurt The Moon

My Dad Is A Clown

One winner will receive a copy of Bang Bang I Shot The Moon & My Dad Is A Clown! (US Only)

The cover is fun and the illustrations are enjoyable! I'm intrigued about how this book deals with the issue of guns with children.

0
The cover is fun and the illustrations are enjoyable! I'm intrigued about how this book deals with the issue of guns with children.
Cancel Update Comment

What do you think of the cover and synopsis? I really like the illustration of the large moon. It looks like a book that would get re-read in my home!

0
What do you think of the cover and synopsis? I really like the illustration of the large moon. It looks like a book that would get re-read in my home!
Cancel Update Comment

Love the cover, makes me think of that movie HUGO and I'm interested in the read.

0
Love the cover, makes me think of that movie HUGO and I'm interested in the read.
Cancel Update Comment

I think both covers will appeal to kids. Both sounds like interesting kids books.