Interview with Kathryn Fitzmaurice, Author of DESTINY, REWRITTEN + Giveaway (US Only) If you've spoken with me about books in the last two months, you've heard me rave about Kathryn Fitzmaurice's DESTINY, REWRITTEN. I was privileged to have the opportunity to send a few questions her way about her inspirations for DESTINY, as well as how her other books, A DIAMOND IN THE DESERT and THE YEAR THE SWALLOWS CAME EARLY, have shaped her writing career. Check out her answers below!


What encouraged you to write about destiny?


For my twentieth birthday, my grandmother, Eleanor Robinson, gave me a volume of Emily Dickinson poetry, THE COMPLETE POEMS OF EMILY DICKINSON.  In the front of it, she wrote, “E.D. is a revered poet.  Perhaps one day, the same will be said of K.H. Happy Birthday, Gramma Eleanor.”  I had gone through the book for months when she first gave it to me, marking my favorite poems with little X’s, and sometimes, I would add a comment next to the poem, indicating why I liked it.  I felt as if her writing this was somewhat of a path to my own destiny, that she had perhaps predicted fate.  I was, at that time, in a poetry phase, which lasted a few years.  And so that day, while I was sitting there, reading through the book of poetry and thinking about her, it came to me that all those poems I loved needed to be in a story about destiny.  So I started writing.


What is your own take on destiny? Do you think we are all fated to live our lives a certain way, or do we make our own destiny?


I believe it is a little of both.  I think people’s lives are mostly planned by God, that there is a path that has been set up for each person with everything that person needs to learn and understand in order to become the best they can be.  There are great and lovely events on this path, such as falling in love and helping others to achieve what they want, but also there are difficult events, things that can cause pain but need to occur.  Each person has a different set of events, picked just for them, because everyone has to learn exactly what they need to in order to become the best version of themselves.  However, I also believe we have what is called free will, and are able to step off of this path and do what we want.  So destiny can be easy, or it can be arduous, depending on the person.  I’ve asked people, as I was writing Emily’s story, and found that everyone has their own opinion.  It’s very interesting to see what people believe about how much we’re able to control, or not control.  In the end, you will get so many different answers, and each one is important.


You wrote that your grandmother gave you THE COMPLETE POEMS OF EMILY DICKINSON and said perhaps you will be a revered poet one day. What do you think she would have to say about your career as a children's book author?


I know she would be very happy for me.  She was always encouraging me and sending me books about writing.  Often times, I wish I could talk with her and ask her how she would have done something, grow a character from beginning to end, fix a plot, etc.  But because that is impossible, I read her published books, and I try to see how she did these things.  I have two copies of her books, one completely perfect, and one where I’ve written in them, to show where she developed something critical, or a wonderful sentence that I thought was brilliant.  I know for sure with all of my heart that had I not spent that summer with her, I never would have become a writer.


You've written three very different protagonists, including one boy, who all have such distinct voices and solid personalities. How do you create, and become, such different characters during your writing process?


This is such a good question.  For me, the character evolves with each chapter, and each day, as I continue writing and developing the story and the plot, the character somehow becomes more, and we grow together as writer and character.  In my opinion, the main thing about a good character is getting the voice right.  I believe the character has to start out one way in the world, usually with some kind of problem they need to overcome, but as the story goes along, the character figures out to fix their problem by themselves, and by the end of the book, they must see the world differently.  They have adjusted their perception and therefore, the way they live and cope.  Every day, events happen that change people.  Some events are small and barely noticed, but some are so incredibly life changing, and they need to be written about.


You've written a lot about the absence of parents in your stories: Emily of DESTINY doesn't know who her father is, Tetsu's father in DIAMOND is sent to a different internment camp, and Groovy's father is sent to jail in SWALLOWS. What are your thoughts on how the absence of a parent can affect a child?


I’ve actually never admitted this before (mostly because it is very personal) but when I was seven years old, my parents were divorced.  I remember my father taking me to the back yard the morning he left and putting me on our swing set.  He was wearing very dark sunglasses.  I couldn’t see his eyes.  I think he did this so I couldn’t see that he was probably crying.  He told me to write to him.  I was able to visit him once each year, for just a week.  And although I had a very loving stepfather who cared about me and was extremely supportive, in my mind, when I think of a family, I do not include a father.  I see a strong mother, because my own mother was very strong and independent and held our family together.  I think each child has a unique home situation and their experiences are imprinted on them, so that as they grow up, they know what they need in order to feel safe.


Are you able to pick a favorite book or character that you've written?


I like them all equally, but I think Tetsu, in A DIAMOND IN THE DESERT, had so many things to learn at such a young age, and also, because he is based on a real person, this novel is just a little bit special to me.  When I pick up that book, my heart is filled with joy because I was able to write Mr. Furukawa’s story.  We spent two years on the phone, discussing his life and his experiences at Gila River.  And then Catherine Frank, who was my editor at Viking, did such an amazing job fixing the story, deleting what was not needed and also helped me to understand the ending.


But really, Groovy/Eleanor and Emily are right there, too.  Groovy had to have her heart broken and Emily had to find her way, both of them aided tremendously by Molly O’Neill, at HarperCollins, who sent me the very best editorial letters a writer could hope for, pages of encouragement and wonderful suggestions.


What are you working on now?


I’ve just finished a manuscript that I’m polishing and about ready to send to Jennifer Rofé.  I usually don’t talk about what I’m writing because it can change so much from a first draft.  But I do like this one, and I hope it will be well received. 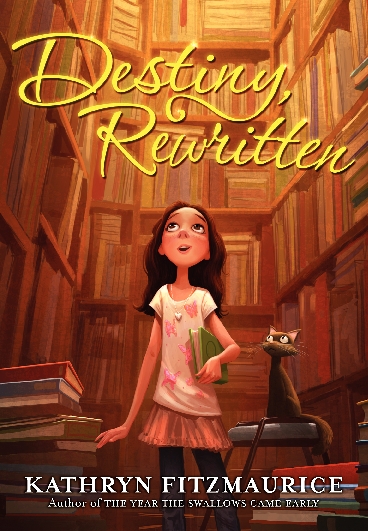 Giveaway Details
1 US winner will receive a signed copy of Destiny, Rewritten
To enter, fill out the form below!

looks and sounds like a book my sister would wnjoy

I'll bet the new one is great. I love everything Kathryn has written!

1
I'll bet the new one is great. I love everything Kathryn has written!
Cancel Update Comment

I'm excited to read this; it's next on my to-read pile. I've heard great things about it!

1
I'm excited to read this; it's next on my to-read pile. I've heard great things about it!
Cancel Update Comment

I just love that this book was inspired by something really personal! You can definitely tell there is a great passion about this story while you are reading it! I just love this book! One of my top reads of the year, for sure! =)

1
I just love that this book was inspired by something really personal! You can definitely tell there is a great passion about this story while you are reading it! I just love this book! One of my top reads of the year, for sure! =)
Cancel Update Comment

I completely agree with you, Jennifer! This is most definitely my favorite book of 2013!

0
I completely agree with you, Jennifer! This is most definitely my favorite book of 2013!
Cancel Update Comment

This is Jennifer @ A Librarian's Library. I can't seem to get my username to register =(

0
This is Jennifer @ A Librarian's Library. I can't seem to get my username to register =(
Cancel Update Comment

Wow, such a nice interview, and it’s nice to know where the author got her inspiration from. Destiny, Rewritten sounds like a cute book.

1
Wow, such a nice interview, and it’s nice to know where the author got her inspiration from. Destiny, Rewritten sounds like a cute book.
Cancel Update Comment

I love her thought on destiny and what it means. I feel like destiny is more or less in your own hands. It requires your actions the most. Without putting yourself out there and doing what you believe is right, nothing will happen.

1
I love her thought on destiny and what it means. I feel like destiny is more or less in your own hands. It requires your actions the most. Without putting yourself out there and doing what you believe is right, nothing will happen.
Cancel Update Comment

Looking forward to reading this book with my daughter!