Today we're excited to share an Interview with January LaVoy, audiobook cast narrator of Hans Christian Andersen’s Fairy Tales.  Read on for more about January and her recent work!

Named Publishers Weekly's "Audiobook Narrator of the Year" for 2013, January has an extensive body of work in both narration and commercial voiceover. Her voice has been heard in national campaigns for products such as Revlon, Toll House, United Health Care, Dannon, Asthma.com, Home Depot, and Obama for America. She has won multiple Audie Awards, most recently in 2016 for her work on Libba Bray's Lair of Dreams.

Check out more about her on her webpage: http://www.januarylavoy.com/ 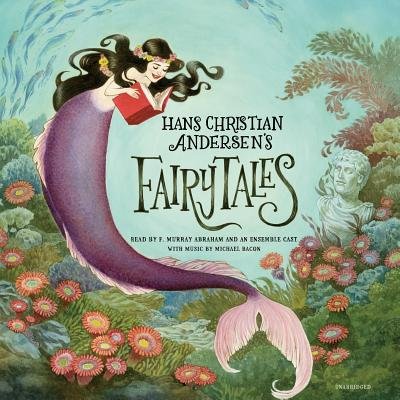 Brought to life by Academy Award®-winning actor F. Murray Abraham and an ensemble cast of narrators, and featuring original music by Michael Bacon, this collection contains Hans Christian Andersen’s most beloved fairy tales, as well as a selection of lesser-known favorites.

Unlike the Brothers Grimm, who collected and retold folklore and fairy tales, Hans Christian Andersen adopted the most ancient literary forms and distilled them into a genre that was uniquely his own. His fairy tales are remarkable for their sense of fantasy, power of description, and vivid imagination. They are like no others written before or since.

Recognizing the literary merit of Andersen's own simple colloquial language, Erik Haugaard has remained faithful to the original text in the translation from Danish to English. Listeners will rediscover Hans Christian Andersen's best-known fairy tales, and find new favorites.

The Princess and the Pea
Thumbelina
The Emperor's New Clothes
The Steadfast Tin Soldier
The Ugly Duckling
The Little Mermaid
The Little Match Girl
The Wild Swans
The Nightingale
The Snow Queen
"The Will-o'-the-Wisps are in Town," said the Bog Witch
The Rags
The Adventures of a Thistle
Luck Can Be Found in a Stick
The Days of the Week

1. What is your favorite Hans Christian Andersen fairy tale?

My favorite has always been THE LITTLE MERMAID. I had the book on tape as a child, and I wore it out listening to it (when one could still do that!)

2. Which characters from this audiobook did you give voice to and how did you prepare?

I voice various characters — some with names you'd recognize, like Thumbelina; some minor characters, adults and children; and a few inanimate objects - a flower; a mirror; the wind. The most fun part of doing this kind of work is that it all grows from imagination, so other than reading the book and conjuring images and sounds in your mind, there's very little preparation necessary.

3. What was the best thing about participating in this particular project?

I loved feeling a connection to stories that are so timeless. Children have been reading and listening to these stories for nearly 200 years, and hopefully, will read them for hundreds more. It feels very special to be a part of that continuum.

4. What are some do's and don'ts before recording an audiobook?

"Do" rest your voice and "don't" overuse it! That's my golden rule. I don't have to be too strict with what I eat or drink — I'm lucky in that way — but I do engage in vocal rest, and need lots and lots of sleep before recording. A short warmup in the morning, and I'm good to go.

5. Is there a narrator who has influenced or inspired your work?

I appreciate the amazing work of so many of my fellow narrators — too many to enumerate! But in general, I'd say my main influence/inspiration is always the author of the book. I try to listen to what they are saying about their characters, through their descriptions, their carefully chosen words — and I let that shape my approach to each book.

Thanks for sharing this with us, January LaVoy! We are certainly in love with Hans Christian Andersen's Fairy Tales and your participation in this magical audiobook!