The Great Big One!

Read on for more about J.C., his book, and a giveaway! 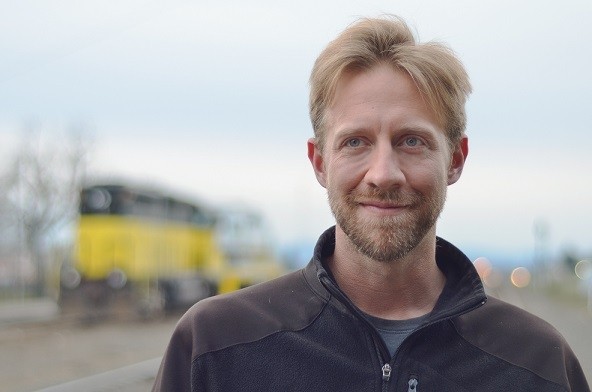 J.C. Geiger survived an earthquake on the Mouth of Hell volcano in Nicaragua, learned to drive stick shift on a bookmobile, and once fell asleep while running. He also writes fiction. He is a GrandSLAM Storytelling Champion at The Moth, and his work has appeared on stage at The Second City and No Shame Theatre. His debut novel, Wildman, was named by Bank Street as a Best YA Book of the Year. J.C. lives about sixty miles from the Oregon coast, and makes the trip as often as he can.

Meet The Great Big One! 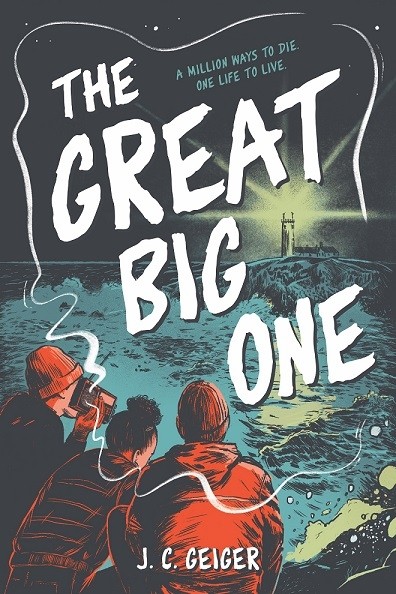 With natural disasters and nuclear war threatening their small town, two twin brothers find themselves enraptured by mysterious music that could change the course of their lives.

Everyone in Clade City knows their days are numbered. The Great Cascadia Earthquake will destroy their hometown and reshape the entire West Coast—if they survive long enough to see it. Nuclear war is increasingly likely. Wildfires. Or another pandemic. To Griff, the daily forecast feels partly cloudy with a chance of apocalyptic horsemen.

Griff’s brother, Leo, and the Lost Coast Preppers claim to be ready. They’ve got a radio station. Luminous underwater monitors. A sweet bunker, and an unsettling plan for “disaster-ready rodents.” But Griff’s more concerned about what he can do before the end times. He’d like to play in a band, for one. Hopefully with Charity Simms. Her singing could make the whole world stop.

When Griff, Leo, and Charity stumble upon a mysterious late-night broadcast, one song changes everything. It’s the best band they’ve ever heard—on a radio signal even the Preppers can’t trace. They vow to find the music, but aren’t prepared for where their search will take them. Or for what they’ll risk, when survival means finding the one thing you cannot live without.

J.C. GEIGER – THE GREAT BIG ONE

When I was thirteen years old, I heard a guitar riff on TV that made me stop chewing my after-school snack and leap to my feet. A wild, electric sound. I wanted that riff to play over the opening credits to the rest of my teenage life. I needed that song.

Then it was gone. Vanished into a commercial break. No lyrics. No way to trace it.

This was in the early 90s. The land of dial-up modems and car phones the size of cinder blocks. No Google. No Shazam. So I borrowed my father’s hand-held tape recorder, consulted TV Guide, then lay in wait for the show to repeat later that week. When the riff came back, I was ready. I pressed record and captured 12 seconds of bliss on a cassette tape the size of my thumb.

I needed help. Resources. So I pulled a classic 90s teenage move, and begged my mom for a ride to the mall.

My quest landed me at Musicland, where I huddled with a squad of nametagged, black-shirted employees around the tape player and asked:

“Can anyone name this guitar riff?”

The Musiclanders were baffled. Then bored. Finally, one said:

Dustin, like old catalog and risqué posters, was apparently kept “in the back.” The guy who swaggered out – long hair, septum piercing, and heavy tats – looked like he’d been lassoed from the Portland punk scene, trussed up, and abandoned in suburban Illinois. After a thoughtful listen, Dustin handed down the verdict:

“That’s either Cracker or Motorhead.”

We followed Dustin as he picked out the CDs with a sure hand. The shrink wrap gleamed under florescent lights. The only way to listen was to buy. And I could only afford one.

My entire adolescence hung in the balance. I picked Cracker.

Dustin shredded the cellophane himself and led the charge to the five-disk changer. In a miracle of fate and track-order, the first riff on Cracker’s first album was the song on the tape. Unified in victory, we did the Musicland version of a football team chest bump.

And I didn’t stop listening to that album for years.

I listened nonstop while I devoured Stephen King and Ray Bradbury, while I wrote and rewrote and threw away letters to girls I loved. David Lowery’s vocals carved their way through the developing landscape of my imagination  – his lyrics like graffiti on the long corridor to adulthood, and my path to becoming a writer.

The paths eventually wound their way out to the Oregon Coast, where I found myself fascinated by radio stations perched at the western edge of the continent, where the Pacific Ocean ricochets radio waves the way a mirror bounces light. With the right receiver and a little luck, you can catch songs from other states, other countries.

If I could find a life-altering guitar riff in a Midwestern living room – what could a teenager find out here?

And the stakes were so much higher. On the coast, the most devastating earthquake to strike America could happen any minute. There’s fear of nuclear strikes. The doomsday clock is always ticking. I imagined teenagers living with chronic fear – and the catalytic effect of finding a song that stops you dead and makes you need the music like breathing. I asked my characters: How far will you go to find the music that truly speaks to you?

For me, apparently, the answer was “the mall.”

I decided if my characters were willing to risk death to meet their musical heroes, I could do a little more to meet mine.

The first person I contacted was David Lowery, the lead singer of Cracker. I told him about my Musicland adventure and the song that changed my life. I asked him if he’d be on a soundtrack to my novel, The Great Big One. Limited release, cassette tape only.

And he said yes.

Thirteen again, I jumped up and down. Ran laps around the yard. Then considered other artists who’d inspired me to write stories, hop cross-country flights, quit jobs just to get the time off. I wrote letters and emails, recorded personal YouTube videos – relentless as a teenager who needs a ride to the mall.

Over time, we decided this would need to be a different kind of tape. An audio experience meant to simulate a late-night radio broadcast. Rare and unreleased songs. No track list. A trip into the audio wilderness at the edge of the world. The sort of mysterious place where you might catch a song that makes you think:

No matter what – I’ve got to find this band.

The Great Big One

Two winners will win a copy of The Great Big One (J.C. Gieger) ~ (US Only)

Author Chat with Sophia Glock (Passport) Plus Giveaway! ~ (US Only)