How a non-sailor wrote a novel with a ship, the ocean and whales

By: Leora Krygier, author of Keep Her

Landlubber. That’s what they call people who are “unseasoned” sailors. The word itself makes me think of a clumsy nerd who won’t get on a ship and “lubs” or bumbles around. Or worse yet, an insult Johnny Depp’s Jack Sparrow might say in Pirates of the Caribbean. Arghhh. Kind of awful, right? But that’s me. I love the beach, but that’s as far as I go. Just try to get me on a sailboat or even an ocean liner. Not happening. The most seafaring I’d done was on a boat ride on a manmade river in Disneyland and even then I held on to the railing.

So, how did I do it – write a novel that included a ship, an ocean and saving whales? And why did I do it? After all, one of the cardinal rules of writing is “write what you know.” But sometimes a writer aspires to write about something they haven’t experienced or seen but something they see in their mind’s eye. And sometimes it’s okay to deviate from that rule.

Much of my novel, Keep Her, takes place in Los Angeles, where I live, and a place I’m very familiar with. But my imagination also took me somewhere else. I’d read about a ship called the Esperanza and it’s 2008 mission to save whales in the Southern Ocean off the coast of New Zealand. And I imagined one of my characters, Aiden, my very handsome, but heartbroken protagonist, writing letters to his dead brother, Alex, while aboard this ship. Having never actually experienced a mission like that, what was a landlubber like me supposed to do?

I did what every writer does no matter what experiences she has or hasn’t had – I researched and researched and researched. I watched the Esperanza’s web cam for hours, studied diagrams of the ship, and virtually walked myself through every deck and cubbyhole of the ship. I poured over maps of the Southern Ocean and followed the ship’s route. I read personal accounts of the 2008 mission and looked at typical weather reports for that season. I also scoured the Internet for every photograph and video I could get my hands on of the ship, the crew and the equipment they used.

After awhile, I could almost feel myself on the ship itself. I could taste the salt in the air. I even got a little seasick a couple of times just sitting at my very land-based computer at home. But that was the awesome thing about it. That’s what both reading and writing is all about – transporting you to a different time and place. There I was on that ship, at the bottom of the world, surrounded by water.

Doing the research for the novel inspired me. I haven’t exactly crossed the Atlantic on a sailboat yet, but I recently mustered up the courage for a speedboat ride to a couple of islands off the coast of Italy. And you know what? It was great.

Don’t get me wrong. I’m still a land lover and not a full-fledged sailor just yet, but I’m doing it. I’m slowly rubbing away at the landlubber in me.

Leora Krygier is the author of When She Sleeps (Toby Press), as well as the YA contemporary novel Keep Her (September 6, 2016; She Writes Press), which is based on the 2008 Greenpeace mission to save the whales in the Southern Ocean. 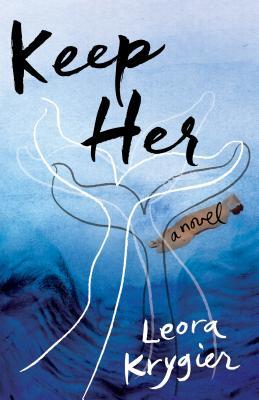 Destiny doesn t factor into seventeen-year-old adoptee Maddie s rational world, where numbers and scientific probability have always proven to be the only things she can count on as safe and reliable. Still, Maddie is also an artist who draws on instinct and intuition to create the collages she makes from photographs and the castoff scraps she saves. But when her brother falls in with a Los Angeles street gang, Maddie loses her ability to create art. Then fate deals Maddie a card she can t ignore: Aiden, a young filmmaker she meets when a water main bursts inside a camera store. Aiden is haunted by the death of his younger brother, and a life-changing decision he must now make whether or not to keep his baby daughter. Caught in a whirlpool of love and loss, Maddie and Aiden find that art and numbers, a mission to save endangered whales, and a worn-out copy of Moby Dick all collide to heal and save them both." I think I wrote my first story at the age of eight, a micro-autobiography. Micro? Because, well, how much can you say at the age of eight? But I guess I was hooked. I also love to take photos with my cameras and iPhone, which is always snug in my back pocket.

For me, every photo has a story, and every story is a snapshot.

I'm the author of "When She Sleeps" (Toby Press) a New York Public Library Selection for “Best Books for the Teen Age,” and about which Newsweek said, “Krygier’s luminous prose transports the reader.”

I'm also a former Los Angeles Superior Court judge and the author of "Juvenile Court: A Judge’s Guide for Young Adults and their Parents" (Scarecrow Press).

I live in Los Angeles with my husband. When I'm not not writing, I love to go to the beach, walk the Santa Monica Mountain trails, and snap lots and lots of photographs. FLASH GIVEAWAY ~ The Cabin (Natasha Preston)!!
Featured Review: And the Trees Crept In by Dawn Ku...