Giveaway: Zin Mignon and the Secret of the Pickled Pigs Feet (Michael Daswick) ~ (US Only) 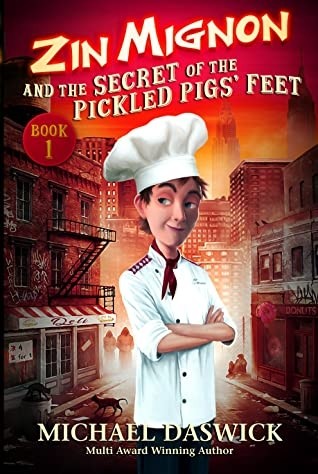 11 year old genius Chef Zin Mignon is in a horrific pickle. He’s been kidnapped from Le Cordon Bleu cooking school in Paris by the mysterious Mustard Monks and spirited away to their ultra-remote mountaintop abbey. In time, he’ll be able to take their daunting Test. If he passes, he may join their secret Order and achieve the culinary success he’s always dreamed of. If he fails….

The tale of Zin Mignon begins at the bottom of a jar of pickled pigs’ feet in his father’s pathetic Brooklyn deli. A secret note sets him on a world-spinning adventure that takes him through the alleys of the homeless to the tables of billionaires, to discover who he really is and the greatness for which he is destined. As he sets the culinary world on fire, a mix of treacherous rivals feasts on the chance to make his dreams go up in smoke.

In the wildly appetizing first book of the Zin Mignon series, with the help of his family and friends, Zin is off to honor the solemn promise he made to his dad and to learn the incredible secret of his family legacy. With humor, amazing exploits and heartfelt compassion, Zin uses food and his kitchen to build a recipe that will lead him to his true identity. Can he cut the mustard, or is it all just pie in the sky?

Michael Daswick is the winner of both of Columbia University's venerable literary awards: The Bennett Cerf Memorial Prize for Fiction and The Cornell Woolrich Fellowship for Creative Writing. This work featured the character Chip Rock, set in the (fictional) deteriorating SoCal beach town of No Palms. The novel CHIP ROCK and the FAT OLD FART followed, as did the collection of connected short stories, HALLBOYS.

Michael grew up in Pasadena, California where he worked in a much-maligned meat market, and played on beaches from Avalon to Zuma. That seedy meat shop and those beaches provide part of the setting for his epic novel, Chip Rock and the Fat Old Fart. Michael’s keen interest in food started in that same meat shop.

Michael and his wife Kim live in Scottsdale, Arizona. They have three children and two happy dogs. Everyone in the family offers a bounty of suggestions as to what direction his plot and characters should take next, and as any honest writer would tell you, this input is always invaluable. These novels would be much less than they are if not for this assistance.

Professionally, Michael has worked in the international golf industry and owned the leading dog shop in Scottsdale. He now writes full time.

Michael has always been interested in cooking and fancies himself a flashy cook and backyard barbeque superstar on his 28 year-old Weber grill. “My relationship with food comes through my family and, especially, our daughter with special needs. From her wheelchair, she’s great at ‘helping’ me cook in the kitchen. Nobody is as excited about food as she is, and this passion is contagious. She loves the Food Network and it’s her dream to become a chef.” Zin Mignon is the written manifestation of her dream and the family’s passion.

Winners will be announced on this site and in our monthly newsletter (sign up now!) within 30 days after the giveaway ends.

Love the super cute cover, and the synopsis sounds great!

The cover is so cute! My son would love this. He's 11 and loves cooking.

0
The cover is so cute! My son would love this. He's 11 and loves cooking.
Cancel Update Comment

I adore the cover and the synopsis sounds like a perfect read the the age group. Best wishes on the book.

0
I adore the cover and the synopsis sounds like a perfect read the the age group. Best wishes on the book.
Cancel Update Comment

The cover is adorable. This book will be fun to read.

0
The cover is adorable. This book will be fun to read.
Cancel Update Comment
How to resolve AdBlock issue?
X