Giveaway & Review: This Is Not That Kind Of Book (Christopher Healy)! This Is Not That Kind Of Book (US Only) 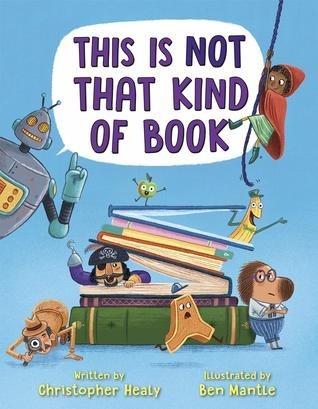 About the Author & Illustrator:

CHRISTOPHER HEALY held numerous other jobs before becoming a children's book author, including actor, ad copywriter, toy-store display designer, fact-checker, dishwasher, journalist, costume maker, video-game reviewer, and haunted-house zombie (though not in that order). He is the author of the popular Hero's Guide series, and lives in New Jersey with his wife, their two children, and a dog named Duncan.

Illustrator Bio: BEN MANTLE has most recently been working as a children's book illustrator from his shared studio in Brighton, England. He also produces screen prints and digital artwork for exhibitions. Ben has illustrated numerous picture books, including the popular books Five Little Pumpkins and There Was an Old Dragon Who Swallowed a Knight.

THIS IS NOT THAT KIND OF BOOK is a humorous jaunt through book genres and classification with some messages about the necessity of expectation flexibility and friendship. The book starts out seeming like an alphabet book, before turning into a fairytale into a science fiction and then a classroom story with mystery, pirates, and joke book characters. In the end, it turns out that this is a book all of its own.

The book features colorful, cartoonish characters with their own fun quirks that come together to create a uniquely adorable story. Much of the book is conveyed through dialogue with some overhead narration, making it a book that is better for older picture book readers who can follow along with who is speaking and also who can understand the comedy. Children will adore the apple who only says “I’m an apple!” but has particularly expressive facial expressions, and whose one phrase could thus convey those emotions as per Groot (for people familiar with The Guardians). There is also the letter A, who only says words which begin with A, and the young girl in a cape, who may be a superhero in sci-fi but is likely not as she is from fairytale books, and even the tenacious Hedgible T. Hedgehog, who is awaiting her new friends who she is sure will be other animals in people clothes.

What I loved: The storyline is certainly giggle-worthy as the diverse characters appear and add their own charm. The plot will make little ones laugh as they explore different genres and types of characters, and as such, this is a great introduction into how stories are classified. The main lessons of the book are about teamwork and unlikely friends, as well as not being too quick to judge or make assumptions about a book (or a person/character, such as a person in person clothes or a letter or a robot), which are certainly universal lessons important to many situations. Children will love laughing along with the story and the many humorous situations.

Final verdict: Ultimately, this is a charming and funny book that literally crosses literary genres and will certainly be enjoyed by preschoolers and young elementary schoolers. With many delightful characters, some important lessons, and a big dose of comedy, this picture book is a win!

Five (5) winners will each receive one copy of This Is Not That Kind Of Book (Christopher Healy)! ~ (US Only)

I think the cover looks great and does a great job of explaining the premise of the book. I hope I win a copy as I think my twins will love this book!

0
I think the cover looks great and does a great job of explaining the premise of the book. I hope I win a copy as I think my twins will love this book!
Cancel Update Comment
How to resolve AdBlock issue?
X