Kids On The March: 15 Stories of Speaking Out, Protesting, and Fighting for Justice

Read on for more about Michael and his book, an guest post, plus an giveaway! 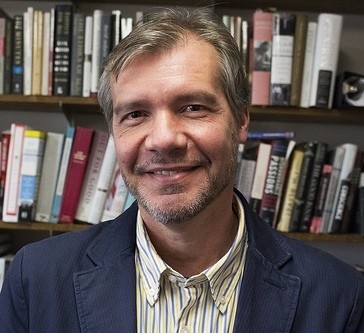 Michael G. Long is the author and editor of many books on civil rights, peaceful protest, and politics. Kids on the March is his first book for younger readers.

Meet Kids On The March: 15 Stories of Speaking Out, Protesting, and Fighting for Justice! 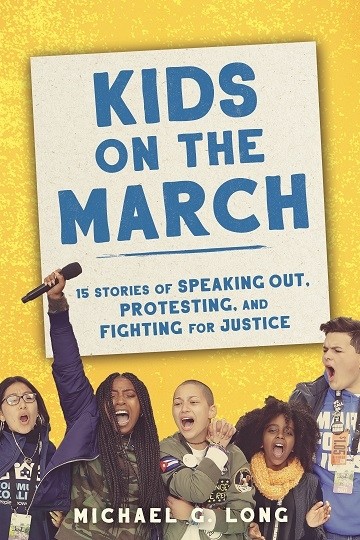 Kids have always been on the front lines of the fights for justice. From marches protesting child labor to the student strike that helped build the case for Brown v. Board of Education to modern-day March for Our Lives and the Climate Strike, Kids on the March tells the empowering story of children and teens throughout the twentieth and early twenty-first century rallying to fight for liberty, justice, and equality.

From the March on Washington to March for Our Lives to Black Lives Matter, the powerful stories of kid-led protest in America.

Kids have always been activists. They have even launched movements. Long before they could vote, kids have spoken up, walked out, gone on strike, and marched for racial justice, climate protection, gun control, world peace, and more.

Kids on the March tells the stories of these protests, from the March of the Mill Children, who walked out of factories in 1903 for a shorter work week, to 1951’s Strike for a Better School, which helped build the case for Brown v. Board of Education, to the twenty-first century’s most iconic movements, including March for Our Lives, the Climate Strike, and the recent Black Lives Matter protests reshaping our nation.

Powerfully told and inspiring, Kids on the March shows how standing up, speaking out, and marching for what you believe in can advance the causes of justice, and that no one is too small or too young to make a difference.

First things first: The power structure in your school is like a human pyramid. Sure, the administrators are on top, but you are on the bottom, and if you begin to pull out, the top topples. You always have the power to make changes.

So how do you use power when you face an injustice at school?

I don’t mean to suggest that my tips for protesting are for everyone. Perhaps you’d rather be behind the scenes, writing protest poems, designing protest clothes, or photographing injustice at your school. There are many ways to protest, and you should use your voice the way that’s best for you.

If you’re up for nonviolent, direct-action protests, I recommend that you consider these time-honored tactics. But first, try less dramatic ones, like talking directly to the principal or sending the administration a formal petition with lots of signatures.

In 1968, high schools in East Los Angeles were failing to give a high-quality education to Chicanx students. The schools lacked adequate facilities, and some teachers made degrading comments about Chicanx culture. So one day, after a lot of planning, the students just closed their books and walked out of their classrooms, leaving teachers without anyone to teach. It was a simple and brilliant way to show the administration that their concerns should be taken seriously.

The East Los Angeles students also jam-packed school board meetings. There, they presented a list of their demands, not requests, and firmly instructed the board to meet them—or to face more walkouts.

After they walked out, the East LA students formed a picket line. Carrying numerous protest signs—one read, “We Are Not ‘Dirty Mexicans’”—they walked back and forth in front of their schools. This caught the attention of community members and local media. By the way, teachers across the country often use picket lines when they strike for better wages and benefits.

I’m almost embarrassed to admit this, but I participated in my first sit-in when school administrators decided to remove ice cream vending machines from the cafeteria. We considered that an unfair assault on our rights, and so we simply stayed in the cafeteria and refused to return to our classes. Of course, there are far better causes, like healthy food, unfair grading, and discrimination in sports. But whatever the cause, sit-ins can be very effective in forcing administrators to respond to your demands.

Shayla Avery, a student at Berkeley High School in California, was upset that some of her teachers were not addressing the killing of George Floyd by a white police officer. “We should do something,” she texted her friend. Shortly later, Avery and two friends organized a protest march in their Berkeley community. They made signs, enlisted drummers, found a sound system, and announced their plans through social media. On June 9, 2020, hundreds of kids turned out for a march that wound through the community and ended at Berkeley High, where students painted “Black Lives Matter” on the street. The goal of their march was to stand in solidarity with nationwide protests, but also to pressure their school’s administration to change the way Black history was taught in the classroom.

Share pictures and messages about your protest on all major social media platforms. Tweet it, for goodness’ sake. And contact all local media outlets; they love a good scoop. Newspaper and television reports about your protest will help pressure administrators to reply to your actions.

School officials might try to punish you for staging your protest, especially if it disrupts school activity. You do not have a right to exercise free speech if your protest infringes on the rights of others or creates a substantial interference with school discipline. Nevertheless, it might be helpful to remind everyone that you have a constitutional right to assemble peacefully. In any case, though, be aware of the risks of protesting and make sure it’s a cause you truly believe in.

Some protests succeed, others fail. But if you don’t try, you’ll never know what thousands of “kids on the march” have come to realize—that win or lose, exercising one’s power by protesting for justice can and does make your school a far better place.

Kids On The March

Three winners will receive a copy of

Kids On The March: 15 Stories of Speaking Out, Protesting, and Fighting for Justice (Michael Long) ~ (US Only)

This would be great in my classroom, non-fiction is hard to get them to read but this book looks really fun!

0
This would be great in my classroom, non-fiction is hard to get them to read but this book looks really fun!
Cancel Update Comment