Today we are chatting with E. Lockhart, author of

Read on for more about E. Lockhart and her book, plus a giveaway!

Chandler Baker lives in Austin, TX with her husband and toddler where she also works as a corporate attorney. Before that, she grew up in Sarasota, Florida, went to college at the University of Pennsylvania in Philadelphia, did a stint at a D.C. firm and worked in Dallas for a major sports franchise. Now, she can usually be found listening to audiobooks at two times the normal speed, overspending at bookstores or obsessing over true crime. She is the author of five young adult books. Whisper Network is her first adult novel. 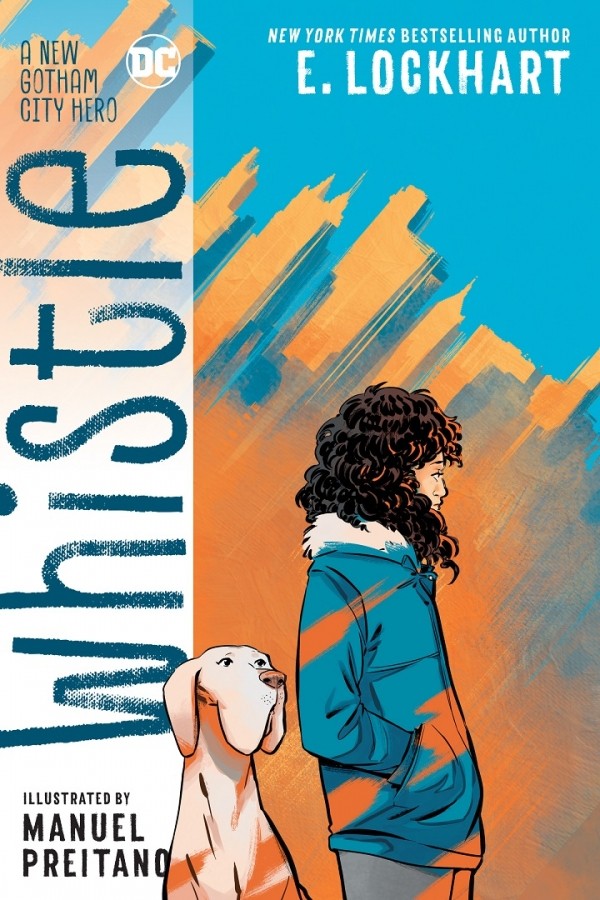 Sixteen-year-old Willow Zimmerman has something to say. When she's not on the streets protesting City Hall's neglect of her run-down Gotham neighborhood, she's working nights at the local dog shelter. But despite how much she does for the world around her, she's struggling to take care of her sick mother at home. She's got no time for boys (though there's one she really likes), and no means to adopt the amazingly loyal stray Great Dane, Lebowitz, that follows her around.

Without health insurance and with money running out, a desperate Willow reconnects with an estranged family friend E. Nigma--party promoter, and real estate tycoon. Nigma opens the door to an easier life, offering Willow a new job hosting his glamorous private poker nights with Gotham City's elites. Now Willow is able to afford critical medical treatments for her mother and get a taste of the high life she's never had.

Then everything changes: Willow and Lebowitz are attacked by one of Gotham's most horrific villains, the monstrous Killer Croc. When they wake after the fight, they can understand each other. And Willow has powers she never dreamed of.

When Willow discovers that Nigma and his poker buddies are actually some of Gotham's most corrupt criminals, she must make a choice: remain loyal to the man who saved her mother's life, or use her new powers to save her community.

YABC:  What gave you the inspiration to writeWhistle: A New Gotham City Hero?

DC Comics invited me to invent a superhero!    They gave me a tour of their super-sexy archives full of first editions and movie memorabilia, then told me I could use any Gotham City villains I wanted. I grew up on Batman comics, so that’s my idea of a party.

Whistle, my hero, has a superhero dog sidekick named Lebowitz.  She is a harlequin Great Dane with a lot to say.  She might be my favorite character I’ve ever invented.

Whistle and the Hound are staking out a delicatessen where (the supervillain) Poison Ivy is expected to attack.  They’re wearing their superhero outfits for the first time.

They wish they had coffee.

They worry their outfits aren’t cool.

They hype themselves up for battle.

I like it because it’s about the everyday friendship stuff of being a superhero team.

Manuel Preitano’s jacket captures the realistic Gotham City I tried to create in Whistle — particularly a neighborhood called Down River that’s based on New York’s Lower East Side in the 1980s, a traditionally Jewish area that’s now got lots of different types of people sharing space. It also captures the relationship between girl and dog that’s central to the story.

I am absolutely sworn to secrecy but come hang out with me on IG @elockhartbooks and I promise you’ll be the first to know — and you’ll know by April 2022.

Whistle is the first Jewish superhero to launch from DC Comics (originating as Jewish) since 1977.  Lebowitz/The Hound is the first-ever female superhero dog.

My heroine’s mother has brain cancer and no health insurance. The scenes with her were very emotional.

YABC:  Which character gave you the most trouble when writingWhistle?

I got to put my own spin on DC villains The Riddler and Poison Ivy.  In both cases, I wanted to show sides of these characters that made them sympathetic and complicated, while still giving them deliciously evil stuff to do. See what you think.

Reproductive freedom and organizations that support it at local and national levels.  I would have a completely different life if Planned Parenthood hadn’t been there for me when I was seventeen.

Three winners will receive a copy of Whistle (E. Lockhart) ~ (US Only) 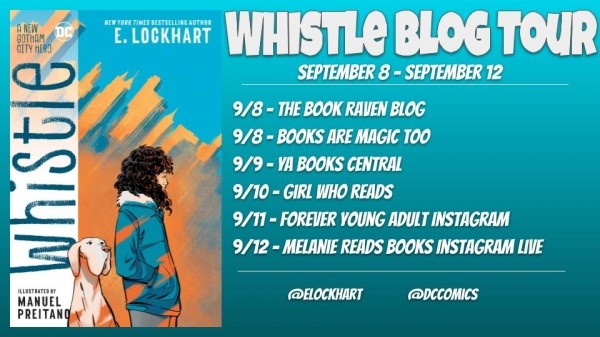