Today we're excited to be part of the blog tour for Marie Lu's book Batman: Nightwalker.

Read on for more about Marie Lu, her book, and a review! 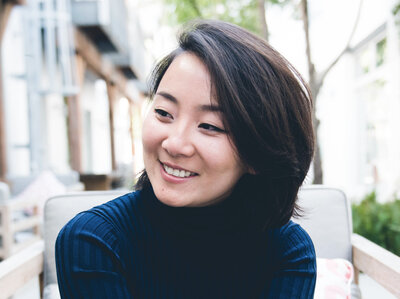 Marie Lu is the #1 New York Times bestselling author of the Legend trilogy and The Young Elites trilogy. She graduated from the University of Southern California and jumped into the video game industry, working for Disney Interactive Studios as a Flash artist. Now a full-time writer, she spends her spare time reading, drawing, playing Assassin’s Creed, and getting stuck in traffic. She lives in Los Angeles, California (see above: traffic), with one husband, one Chihuahua mix, and two Pembroke Welsh corgis.

Action-packed and With the Right Dark Elements!

I am in love! The DC Icon series is turning me into a fan of superheroes, and Marie Lu's take on Batman is all kinds of exciting. Batman: Nightwalker is a fantastic follow-up to Wonder Woman: Warbringer by Leigh Bardugo and this time we step into young Bruce Wayne's life as he navigates the dangerous streets (and more) of Gotham City before becoming the enigmatic Dark Knight.

Truth be told, I'm not a Batman expert. I've watched a few movies growing up and some episodes of the animated series, but I don't remember much about them except enough to recognize Bruce, Alfred, the Batmobile, and the Joker. However, as a newbie to Bruce Wayne's world, I can tell you that I enjoyed this book far more than I anticipated.

Teen Bruce Wayne is the type of superhero character I love reading about in YA fictional worlds--with good morals, smart, and a sense of justice. It also doesn't hurt that he's mysterious and his need to save the day seems to always get him into dangerous situations, which leads to entertaining action. His thoughts would always circle back to his parents and the legacy they left behind after being murdered, and my heart would ache for his pain and loneliness, as well for his eagerness to make Gotham City a safer place. Poor Bruce. Such a sweet young soul!

Thanks to this book I finally begin to understand why Bruce Wayne grows up into such a dark superhero. My interest for this character was thin before, and watching a few films sporadically is definitely not enough to dig into his story. However, now I feel ready to start picking up the pieces and read/watch more about him. I want to know more!

My lack of knowledge doesn't allow me to compare Batman: Nightwalker's world to all the comic books/movies versions or say how accurately it's portrayed, but what I can say is that Marie Lu never fails to deliver when it comes to world-building. Marie Lu has the ability to build strong skyscrapers out of nothing and make our very air tangible, so anything she writes I can easily picture it in my mind, and with this book it was no exception. I felt myself in Gotham City, walking alongside Bruce Wayne or entering the prison and feeling the tension of the place. To trace its walls and imagine peering into Madeleine Wallace's cell.

This is a character I was surprised to fall in love with. While Bruce is ordered to community service and serves in Gotham City's most dangerous prison, he somehow gets entangled with her for her connection with the Nightwalkers. Madeleine initially gave me the creeps, but by the end of the book everything about her made sense and my appreciation for her grew tenfold. She's definitely brilliant, but one I'd stay far away from if I can help it.

While I highly enjoyed the storyline and the main characters, I was hoping for Alfred and other secondary characters to have a bigger role in this book. I get that the Dark Knight works solo (at least initially as far as I know) but it would have been nice to have read more of these characters, including Bruce's two best friends, Dianne and Harvey. I liked their company and was not satisfied with their few appearances.

I could go on and on, but I'll end up by saying that Batman: Nightwalker is an entertaining, action-packed novel with the right dark elements that make up for a great superhero story! It's a must add to your TBR!

*Thanks to Penguin Random House International for the review copy in exchange of my honest opinion!*