Demitria Lunetta [demitrialunetta.com] is the author of THE FADE [amzn.to], BAD BLOOD [amzn.to], and the YA Sci-fi duology, IN THE AFTER [amzn.to] and IN THE END [amzn.to]. She is also an editor and contributing author for the YA anthology, AMONG THE SHADOWS: 13 STORIES OF DARKNESS & LIGHT [amzn.to] and the upcoming BETTY BITES BACK: STORIES TO SCARE THE PATRIARCHY [amzn.to]. 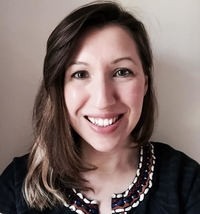 Kate Karyus Quinn [katekaryusquinn.com] is first and foremost an avid reader and unapologetic booknerd. Although, she mostly reads YA and romance, she often samples different genres in her constant search for the next great read. Her titles include ANOTHER LITTLE PIECE [amzn.to], (DONT YOU) FORGET ABOUT ME [amzn.to], DOWN WITH THE SHINE [amzn.to] and THE SHOW MUST GO ON [amzn.to].

Marley Lynn [marleylynn.com] is a lost child of the gods, who waits on the shores of Lake Erie for her parents to bring her home. FIRE & FLOOD [amzn.to] is her first book. 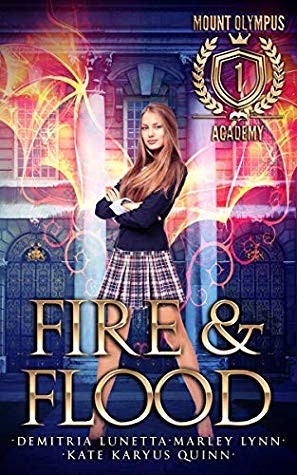 Gods, monsters, and magic school. Class will never be the same.

My Florida summer is not so hot. My mom and sister disappear, my dad is killed by a rogue wave, and then Hermes - yeah the god guy - shows up. He says a wave didn't kill my dad - it was a monster from Greek myth. He invites me to attend Mount Olympus Academy where I'll learn to be a killer and take my revenge.

My classmates are vampires, witches, and shifters - all of us training to fight in the war between the gods and monsters. There's also... Val. He's a vampire, and I can't stop thinking about him even though interspecies dating is taboo. Plus he's got secrets too.

I get secrets. The wings that sprout from my back were hidden from me my entire life. I've learned how to control them, but haven't completed a full shift yet, which makes it impossible to figure out what I am. And... sometimes, I breathe fire. Which is weird, but also unfortunate, because someone has started setting fires on campus and right now all the evidence points to me.

I need to figure out how to shift and clear my name, or else I'm going to find out what happens to those who betray the gods. I've heard they die by fire or flood... and I don't like either of those options

Kate: My favorite character is Val. I love a hot tortured vampire with a secret. I also, however, fell in love with Greg, our dorky sidekick/friend. I'm not sure if Marley or Demitria wrote his first appearance on the page, but from his first line of dialogue - I just fell in love.

Demitria: My favorite character is Fern. She's the Willow of the group. She's smart and kind but also powerful. I had so much fun writing her interactions with the rest of the gang.

Marley: I definitely had the most fun whenever it was a scene with Ocypete, the harpy flying instructor. She's an old woman with very definite opinions, and she's not going to be a hand-holding flying coach. It was fun to write someone who could be supportive, but critical at the same time.

Kate: I found out while co-writing a graphic novel with Demitria Lunetta that co-writing is AMAZETITS. It makes the whole writing process so much more collaborative and also just - fun! We used Slack to plan out the book and update each other on where we were and also constantly joke around. Never has one book spawned so many inside jokes.

Marley: Definitely the novel! We were halfway through the book itself before we started talking about titles. We were just having fun with our ideas. We were originally going to go with "Assassination Academy" as the series title, but decided we like Mount Olympus Academy better. Although we did have fun with the idea of Assassination Class being shortened to "Ass Class" on Edie's schedule. I think that was actually the title of the document we were originally passing back and forth to each other - Ass Class!

Marley: When you're working with co-authors like this, the most fun part is definitely the drafting! It goes so fast when other people are adding to your word count. But it does make the revising trickier! We would forget details that someone else had added, and sometimes we would contradict each other with small things - like whether we were using "Ms." in front of teacher's names or not. So the drafting is easier with three people... but the revising is harder!

Demitria: What I love best about the covers for MOUNT OLYMPUS ACADEMY is the control we had in their creation. We all came together with our ideas and Kate put together the cover samples. We chose the model and the pose and the colors and the background. We must have looked a hundred wing variations...I know there's a message thread where I suggest fire wings ten different times. And I got the fire wings!!! There was trial and error but I love how it ended up, especially the logo. I've never has a book series with a logo before!

Kate: I love the scene when Edie first arrives at Mount Olympus Academy and meets her soon-to-be best friend, Cassie. It was really fun figuring out what the school looks like and how it's divided by different disciplines. And it was cool getting to know Cassie (the seer who never sees anything more important than tomorrow's lunch menu) as she introduces Edie to this whole new world.

Demitria: Working with two other authors we each had our "superpower". Kate is great at writing emotional scenes and character development. Marley really nails the action scenes. Demitria is great at moving the plot along and continuity.