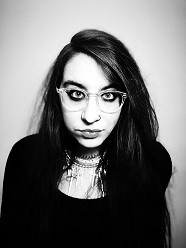 EMILY A. DUNCAN is the New York Times bestselling author of Wicked Saints. She works as a youth services librarian and received a Master’s degree in library science from Kent State University, which mostly taught her how to find obscure Slavic folklore texts through interlibrary loan systems. When not reading or writing, she enjoys playing copious amounts of video games and dungeons and dragons. She lives in Ohio. 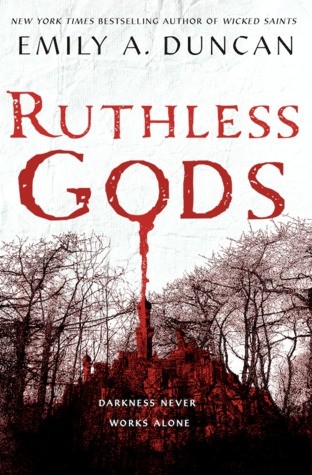 Nadya doesn’t trust her magic anymore. Serefin is fighting off a voice in his head that doesn’t belong to him. Malachiasz is at war with who--and what--he’s become.

As their group is continually torn apart, the girl, the prince, and the monster find their fates irrevocably intertwined. They’re pieces on a board, being orchestrated by someone… or something. The voices that Serefin hears in the darkness, the ones that Nadya believes are her gods, the ones that Malachiasz is desperate to meet—those voices want a stake in the world, and they refuse to stay quiet any longer.

S E R E F I N M E L E S K IA viper, a tomb, a trick of the light, Velyos is always reach- ing for whatever does not belong to him.

—The Letters of Włodzimierz

Serefin Meleski inhabited the sliver of night that was ripe for betrayal. It was a time when knives were unsheathed, when plans were created and seen into fruition. It was a time for monsters.

He knew that span of hours intimately, but even knowl- edge of the inevitable wasn’t enough to make it less pain- ful. It wasn’t like he spent his nights awake because he was expecting another tragedy.

No, he did it because it was easier to drink himself into oblivion than face the nightmares.

He was awake when Kacper slipped into his cham- bers. To rouse him, clearly, but he probably wasn’t partic- ularly surprised to find Serefin lying on the chaise in

his sitting room, one foot  braced on the ground, the other  leg kicked up against the back. An empty glass on the floor within reach and a book hanging over the arm where Sere- fin had put it to mark his place as he considered the same thing he had considered every night for the last four months: dreams of moths and blood and monsters.

Horrors at the edges of his awareness and that voice. The thin, reedy voice that needled him from a place past death. It never left. Those strange intonations hummed constantly in his veins.

“Any trouble is of your own making,” the voice snipped. He did his best to ignore it.

“Who is it?” he asked Kacper. The hammered iron crown had long since been placed on his head, his palm cut and bled on an altar as he was named king of Tranavia—his downfall was oncoming. The nobility had never liked him, not when he was the High Prince, and certainly not since his coronation.  It was never a matter of what or when, only who would be the first one brave enough to strike.

He had let the tense whispers go on and put off explaining fully how his father had died. He was tempting fate. Tranavian politics were messy. So very, very messy.

Serefin nodded, not bothering to sit up. He’d anticipated it from the slavhki who had been supporters of his father.

Serefin winced, finally standing. Nicking his finger, he lit a few candles with the magic sparking from his blood and wiped his hand, movements slow.

Żaneta’s family had been demanding answers for months. Serefin was at a loss for what to say. “Oh, terribly sorry, she com-

mitted some light treason and the Black Vulture decided she would be better served amongst his kind. Tragically awkward situation, but, there it is! Nothing to be done.”

It was a constant, festering point of anxiety that had set- tled underneath his skin. Yes, Żaneta had betrayed him, and, yes, he had died for it, but did she deserve the terrifying fate Malachiasz had chosen for her?

“You’re being unusually calm about this,” Kacper noted. “What will they do, I wonder? Hang me? Toss me in the dun-

geons and forget about me?”

Kacper deflated some, shoulders slumping. “I hate when you’re defeatist,” he muttered, shoving past where Serefin stood to make his way into Serefin’s bedchambers.

“Where are you going?” Serefin asked. He contemplated the bottles in his cabinet before pulling a miraculously full bottle of vodka from the shelf. “I’m not defeatist,” he murmured. “I’m pragmatic. Realistic. This was inevitable.”

“A coup is not an inevitability,” Kacper snapped from inside the room. Was he packing? “None of this would have hap- pened if you had hanged that damned cleric instead of forcing her into the same odd limbo you’ve forced on the rest of the country. But you didn’t. And here we are with a coup on our hands because we have no one to blame. Do you want to end up like your father?”

Serefin flinched. He took a long drink. Dreams of moths and blood and his father’s body at his feet. He had not landed the killing blow but it was his fault all the same.

“No,” he whispered, brushing a pale moth away from the flame of the candle.

But that is likely inevitable, too, Serefin thought morosely.

Kacper would not take well to him saying it out loud.