Author Of The Week: Chat with Peadar O' Guilin (The Call), plus Giveaway!! Each week we will be interviewing a different YA author

and highlighting their upcoming release!

YABC's Author of the Week!! The Call came to me first as an image of somebody disappearing in a crowded room. Their clothing just falls to the floor and while everybody knows they'll reappear in a few minutes, the chances are they'll come back dead. I loved the dramatic tension of it. I could imagine people looking at their watches, counting down the seconds until their friend -- or what's left of their friend -- returns.
YABC:  Who is your favorite character in the book?
It might be Megan, the foul-mouthed best friend of The Call's hero. She says all the things that I myself am too polite to say, and she attracts all the wrong kinds of trouble.
YABC:  Which came first, the title or the novel?
The novel. The original title was "The Fairy Killers" and even that took its time in making an appearance. I think The Call works much better. It's more resonant, at least.
YABC:  What scene in the book are you most proud of, and why?
Rather than a single scene, it was a series of them. One teenager after another is stolen away to the horrors of the Grey Land. This event, known as The Call, happens a lot in the book, so I had to spend a great deal of imagination to ensure it felt fresh and original every time. Hopefully my readers will think I succeeded!
YABC:  What do you like most about the cover of the book?
The US edition of The Call has a quirky little skull in the letter "A". I've started using it as my avatar in Twitter. I also adore the elegant use of silver foil on the European hardback.
YABC:  What was your favorite book in 2015?
Ian McDonald's Luna, or maybe it was NK Jemisin's The Fifth Season. I'm a sucker for immersive, imaginative worldbuidling and both of these books delivered on that in a big way.
YABC:  What’s up next for you?
I'll be visiting New York. I hear they have every kind of food on the planet. I'm going to sign some copies of The Call there and I'll stain each one of them with a different flavour of ice-cream. *If* my publishers will let me ;) I'll also be taking part in a wonderful science fiction convention in Kansas City, MO. Can't wait!
YABC:  Which part of the writing process do you enjoy more: Drafting or Revising?
I hate revising and revising hates me! I don't plan my books. They come to me in fits and starts, with plenty of cursing when I get stuck. But the upside is that drafting is like working on an enormous puzzle. Revising, on the other hand, is like the cleaning up you have to do when you were foolish enough to hold a party in your own home... A big party. Attended by drunken circus performers, wandering bears, and a hundred 4 year olds with access to too much candy. The Call had more than its share of floor scrubbing, I can tell you! And just try getting candy out of the carpet and your pets!
YABC:  Is there an organization or cause that is close to your heart?
I automatically love anybody who speaks an endangered language. Can't help it. I'm also rather fond of this planet and would love for us humans not to ruin it just yet.
Meet, The Call!!! 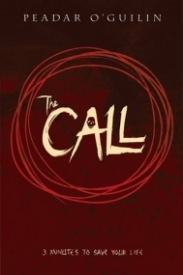 The Hunger Games meets horror in this unforgettable thriller where only one thing is certain . . . you will be Called.

Thousands of years ago, humans banished the Sidhe fairy race to another dimension. The beautiful, terrible Sidhe have stewed in a land of horrors ever since, plotting their revenge . . . and now their day has come.

Fourteen-year-old Nessa lives in a world where every teen will be "Called." It could come in the middle of the day, it could come deep in the night. But one instant she will be here, and the next she will wake up naked and alone in the Sidhe land. She will be spotted, hunted down, and brutally murdered. And she will be sent back in pieces by the Sidhe to the human world . . . unless she joins the rare few who survive for twenty-four hours and escape unscathed.

Nessa trains with her friends at an academy designed to maximize her chances at survival. But as the days tick by and her classmates go one by one, the threat of her Call lurks ever closer . . . and with it the threat of an even more insidious danger closer to home.

Five winners will recieve a copy of The Call. (US only)

Hello Peadar, your book sounds chilling, I would love to read it. Thank you

0
Hello Peadar, your book sounds chilling, I would love to read it. Thank you
Cancel Update Comment

what do you mean the hunger games meets horror!? Wasn't being forced to fight to the death horrifying enough!? oh I want to know now...

0
what do you mean the hunger games meets horror!? Wasn't being forced to fight to the death horrifying enough!? oh I want to know now... :)
Cancel Update Comment

What authors have inspired your writing?

0
What authors have inspired your writing?
Cancel Update Comment

What inspired the premise? It sounds absolutely stunning and unique

0
What inspired the premise? It sounds absolutely stunning and unique
Cancel Update Comment

What inspired you to start writing?

0
What inspired you to start writing?
Cancel Update Comment

Do you like to listen to music as you write or, do you need silence? Do you drink lots of coffee when you write? The book sounds great!

0
Do you like to listen to music as you write or, do you need silence? Do you drink lots of coffee when you write? The book sounds great!
Cancel Update Comment

Any authors who influenced your writing?

0
Any authors who influenced your writing?
Cancel Update Comment
How to resolve AdBlock issue?
X