Author Of The Week: Chat with Jenn Lyons (The Ruin Of Kings), Plus Giveaway! 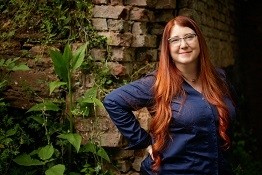 Jenn Lyons was a graphic artist and illustrator for 20 years and has worked in video games for over a decade. She previously worked on The Saboteur and Lord of the Rings: Conquest at EA Games. She is based out of Atlanta, Georgia. The Ruin of Kings is her fantasy debut. Follow her on Twitter: @jennlyonsauthor 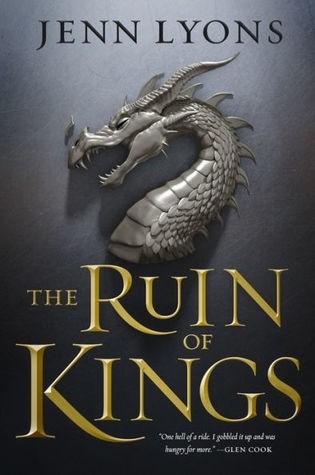 There are the old stories. And then there’s what actually happens.

Kihrin is a bastard orphan who grew up on storybook tales of long-lost princes and grand quests. When he is claimed against his will as the long-lost son of a treasonous prince, Kihrin finds that being a long-lost prince isn't what the storybooks promised.

Far from living the dream, Kihrin finds himself practically a prisoner, at the mercy of his new family's power plays and ambitions. He also discovers that the storybooks have lied about a lot of other things things, too: dragons, demons, gods, prophecies, true love, and how the hero always wins.

Then again, maybe he’s not the hero, for Kihrin isn’t destined to save the empire.

Uniting the worldbuilding of a Brandon Sanderson with the storytelling verve of a Patrick Rothfuss, debut author Jenn Lyons delivers an entirely new and captivating fantasy epic. Prepare to meet the genre’s next star.

No single event inspires to a book like this: it's too big with too much going on. Authors pour their lives into their books in ways that aren't always obvious. I will say, however, that when I was much younger a group of men I used to game with provided a whole lot of inspiration. The main character, Kihrin, is in many ways an amalgam of their best and worst qualities.

I have so many, to be honest, but I'd have to say Tyentso. She was originally supposed to be a very minor character, but she kept demanding more book space. I like a woman who refuses to sit quietly and do what she's told.

Oh, the novel, by rather a large margin. I think we probably went through about seventeen iterations before we settled on a book title that everyone liked!

The very last one in the book. I'm not going to fully explain why, except to say that particular scene wasn't planned so much as evolved. I'm mostly an outline and planned scenes kind of writer, but that last scene was a lovely bit of serendipity when I realized the inevitable conclusion of the situation I'd created. I love the unexpected discoveries in writing.

Don't slow down. I've learned that I'm not one of those authors who can afford to write slowly. That only gives time for my insecurities and anxieties to catch up with me.

Oh, the dragon, without question. I remember when my editor told me she wanted to put a dragon on the cover. I laughed and said, "Do you seriously think I'm going to say no?" Added bonus: Lars Grant-West, the artist, did a truly incredible job.

There are a LOT (including my own, of course) but I am very excited about Arkady Martine's A Memory of Empire, Max Gladstone's The Empress of Forever, Charlie Jane Ander's The City in the Middle of the Night, Anne Leckie's The Raven Tower, and Roshani Chokshi's The Gilded Wolves. Okay, I guess I can't pick just one. There's a lot of fantastic stuff coming out next year.

There were so many! And they were so amazing! Truly I am in awe of what an extraordinary group of writers are publishing in SFF these days. It would be almost impossible to just pick one.

I'm currently finishing up the third book in the series (there are five books in total planned) so...book four is next. Ideally, I'd like to have the entire series written (at least in first draft form) by the end of 2019.

There's a scene where Kihrin's father discovers him flagrante delicto with a woman. Instead of punishing Kihrin, his father chooses to take out his rage on the woman. As a victim of abuse myself, that was incredibly difficult scene for me to write. For that matter, all the abuse scenes with Kihrin's father were tough to write.

Thurvishar D'Lorus. I had certain intentions towards Thurvishar in terms of behavior and sexuality, and he just refused to cooperate. Once I let the character 'have his way' as it were, everything flowed beautifully.

Oh, drafting, without question. Revising is important, but I wouldn't call it fun.

Habitat for Humanity has always been a favorite of mine.

The Ruin Of Kings

Author Chat with Iva-Marie Palmer (Gimme Everything You Got), Plus Giveaway! ~ (US Only)

Author Chat with Erica Waters (Ghost Wood Song), Plus Giveaway! ~ (US Only)

Author Of The Week: Anna Jarzab (Breath Like Water), Excerpt, Plus Giveaway! ~ (US Only)

Spotlight on After The Worst Thing Happens (Audrey Vernick), Excerpt, Plus Giveaway! ~ (US Only)

The cover is attractive and the fantasy sounds very intriguing. Good luck with your novel.

0
The cover is attractive and the fantasy sounds very intriguing. Good luck with your novel.
Cancel Update Comment

I love a good long-lost child of someone important plot! And I have been craving a good dragon fantasy since watching The Dragon Prince show. This may just fit the bill!

0
I love a good long-lost child of someone important plot! And I have been craving a good dragon fantasy since watching The Dragon Prince show. This may just fit the bill!
Cancel Update Comment

I love this cover so much! The cover is beautiful!

0
I love this cover so much! The cover is beautiful!
Cancel Update Comment

The cover is gorgeous! And I love the story synopsis. Sounds like a really good read!

0
The cover is gorgeous! And I love the story synopsis. Sounds like a really good read!
Cancel Update Comment

I love the dragon on the cover. It sounds like a great anti-hero story.

0
I love the dragon on the cover. It sounds like a great anti-hero story.
Cancel Update Comment

The cover is stunning. The synopsis sounds exciting and epic.

0
The cover is stunning. The synopsis sounds exciting and epic.
Cancel Update Comment

The cover is gorgeous! This book sounds like it will be amazing!

I love the cover! Can't wait to read it!

0
I love the cover! Can't wait to read it!
Cancel Update Comment
Previous     Next
1 2
How to resolve AdBlock issue?
X