Author Of The Week: Chat with B.T. Gottfred (The Nerdy and The Dirty), Plus Giveaway!! B. T. Gottfred is an author, playwright, and - ooh, look there, behind you . . . no, you're right, never mind - director. His first novel was Forever for a Year.

Meet The Nerdy and The Dirty!! 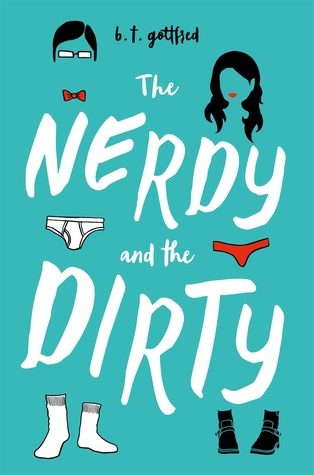 His classmates may consider him a nerd, but Benedict Pendleton knows he's destined for great things. All he has to do is find a worthy girlfriend, and his social station will be secured. Sure, Benedict is different--but that's what he likes about himself.

Pen Lupo is sick and tired of hiding who she is. On the outside, Pen is popular, quiet, and deferential to her boyfriend. On the inside, however, Pen is honest, opinionated--and not sure that she's quite like other girls. Do they have urges like she does?

When fate intervenes, Pen and Benedict end up at the same vacation resort for winter break. Despite their differences, the two are drawn together. But is there such a thing as happily ever after for this unlikely pair?

Most of my books (and my screen/stage plays as well) start with characters talking in my head and eventually demanding to be given their own story. Benedict and Penelope might have been the fastest two characters that went from birth to book.

Asking me to choose between Penelope and Benedict would be like to asking any parent to choose between their children. I will add that once fully formed, both characters never wavered in who they were or what they wanted, which made my job of writing down what they were saying and thinking exciting and liberating from start to finish.

Definitely the novel. (I had to change the title as we got closer to publication.) But strangely enough, I love the final title exponentially more than the original even though I went through a mourning period once I knew the first title had to be changed. I learned a valuable and humble lesson in flexibility.

There may or may not be a 40 page sex scene in the middle of the book. (Well, there’s a lot of talking, too.) When I was finishing writing it, I told myself, “Wow, I love that scene… and wow, that just made this book totally unpublishable.” But funny enough it has turned out to be readers’ and critics’ favorite section as well.

That writing is impossibly hard and to be nicer to myself when I have bad days or months or years. I’ve been writing full time for almost twenty years now and only now do I feel like a have a small grasp on what kind of writer I was destined to be.

Everything. ;) That’s a cheat of an answer. But I instantly loved the cover when I first saw it. If I had to choose, I’d choose the characters’ socks and shoes. I feel like it sums up so much about them and the story in one tiny detail.

My third book (whose title I can’t quite yet say) comes out a year from now. I know that’s a cheat of an answer as well! ;)

My writing group partner Gretchen McNeil’s book I’m Not Your Manic Pixie Dream Girl was astounding, and I had the pleasure of seeing it rise from birth to magnificence.

I just wrote and directed a teenage digital series for go90 / Verizon that will arrive in 2017. It’s about a disparate group of teens searching for a million dollars inside their high school the night before graduation.

A special thanks to all lovers of books. I simply have never met a book person who wasn’t magical in some way. The Nerdy and The Dirty

One winner will receive a copy of The Nerdy and The Dirty (B.T. Gottfred) ~ (US Only).

The cover looks funny, I feel like it would be a great read!!

The characters sound unique and the cover seems to fit the storyline well. :-) Thanks, Kara S

0
The characters sound unique and the cover seems to fit the storyline well. :-) Thanks, Kara S
Cancel Update Comment

The Nerdy and the dirty sounds like a fun read! I Love the fun cover ♡ Thank you

0
The Nerdy and the dirty sounds like a fun read! I Love the fun cover ♡ Thank you
Cancel Update Comment

I love how the cover looks fun and how it would definitely stand out next to other books, and how it also makes me question what the book could involve. Although, the synopsis sounds like its going to be a hilarious book, and based on the interview questions I think I would gladly enjoy the book a lot.

0
I love how the cover looks fun and how it would definitely stand out next to other books, and how it also makes me question what the book could involve. Although, the synopsis sounds like its going to be a hilarious book, and based on the interview questions I think I would gladly enjoy the book a lot.
Cancel Update Comment

I think it sounds really entertaining! The cover is funny, too.

0
I think it sounds really entertaining! The cover is funny, too.
Cancel Update Comment

I love the cover and synopsis! This seems like such a great funny read! I think the interview with the author has made me even more excited to read this book!

0
I love the cover and synopsis! This seems like such a great funny read! I think the interview with the author has made me even more excited to read this book!
Cancel Update Comment

This cover is really fun! And the book sounds cute and funny.

0
This cover is really fun! And the book sounds cute and funny.
Cancel Update Comment

The cover is cute and the synopsis make sme want to read this fun book.

0
The cover is cute and the synopsis make sme want to read this fun book.
Cancel Update Comment
Previous     Next
1 2
How to resolve AdBlock issue?
X