Author Of The Week: Author Chat with Melissa de la Cruz (Never After: The Thirteenth Fairy), Plus Giveaway! ~ (US Only) Melissa de la Cruz is the #1 New York Times, #1 Publishers Weekly and #1 IndieBound bestselling author of Isle of the Lost and Return to the Isle of the Lost as well as many critically acclaimed and award-winning novels for readers of all ages. Her books have also topped the USA TODAY, Wall Street Journal and Los Angeles Times bestseller lists and have been published in more than twenty countries.

A former fashion and beauty editor, Melissa has written for the New York Times, Marie Claire,Harper's Bazaar, Glamour, Cosmopolitan, Allure, the San Francisco Chronicle,McSweeney's, Teen Vogue, CosmoGirl! and Seventeen. She has also appeared as an expert on fashion, trends and fame for CNN, E! and Fox News.

Melissa grew up in Manila and moved to San Francisco with her family, where she graduated high school salutatorian from the Convent of the Sacred Heart. At Columbia University, she majored in art history and English. Today she lives in Los Angeles and Palm Springs with her husband and daughter.

Meet Never After: The Thirteenth Fairy! 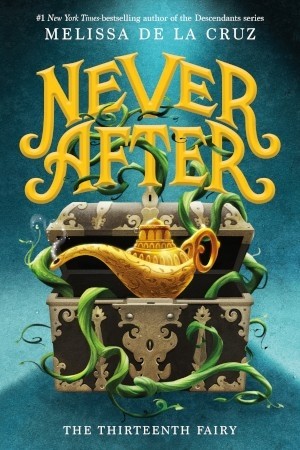 Real life and fairy tales collide in Never After: The Thirteenth Fairy, book one in the new middle-grade Never After series from the #1 New York Times bestselling author of The Descendants series, Melissa de la Cruz.

Nothing ever happens in Filomena Jefferson-Cho’s sleepy little suburban town of North Pasadena. The sun shines every day, the grass is always a perfect green, and while her progressive school swears there’s no such thing as bullying, she still feels bummed out. But one day, when Filomena is walking home on her own, something strange happens.

Filomena is being followed by Jack Stalker, one of the heroes in the Thirteenth Fairy, a series of books she loves about a brave girl and her ragtag group of friends who save their world from an evil enchantress. She must be dreaming, or still reading a book. But Jack is insistent—he’s real, the stories are real, and Filomena must come with him at once!

Soon, Filomena is thrust into the world of evil fairies and beautiful princesses, sorcerers and slayers, where an evil queen drives her ruthless armies to destroy what is left of the Fairy tribes. To save herself and the kingdom of Westphalia, Filomena must find the truth behind the fairytales and set the world back to rights before the cycle of sleep and destruction begins once more.

Jack Stalker, the dashing hero of the fictional series in the book, is my favorite. I have a soft spot for dashing Jacks. (Yes I missed Jack Force from Blue Bloods so much I wrote in another Jack in this book!)

YABC:  Who is your favorite character in the book?Which came first, the title or the novel?

The title came to me at a dinner with my agent. I said “It’s called NEVER AFTER!” and it felt like a lightbulb went off in my head.

YABC:  Who is your favorite character in the book?What scene in the book are you most proud of, and why?

When Filomena finds out the truth and the truth about her parents it made me cry, I didn’t realize it was such an emotional journey. I thought it was just a fun adventure. But it’s really about family love and what makes a family.

YABC:   What new release book are you looking most forward to in 2021?

Very excited for all my releasees, including The Queen’s Secret, the sequel to the Queen’s Assassin coming out in March, then High School Musical: The Musical: The Series: The Road Trip which is an original novel in the High School Musical world, bridging season 1 to season 2, and my new Audible original, The Five Year Hitch, which stars Witches of East End stars Rachel Boston and Daniel di Tomasso. As well as the second book in the Never After Series which comes out in December 2021.

I’m currently working on Blue Bloods: THE RETURN, which is a return to my favorite vampire world. All yours and my favorite characters are back! It’s super fun being back with the NYC vampire gang.

Revising is much easier, once you have words down, it’s just a matter of figuring out the right ones. Much less daunting than a blank page.

Speed. I had an IQ test once and my “processing speed” was in the 99.9 level, which means I can absorb and understand and quickly figure out things, which I think is very helpful when I work on multiple projects a year. It doesn’t take me long to get up to speed on a project, I am very fast.

My sister and brother in law are volunteer organizers for the Society of St. Vincent de Paul’s Friends of the Poor, which is a program in Los Angeles which makes a difference in individual lives—not a sweeping charity for the nameless and the faceless. For instance, they will work with a particular family to get them what they most need at the moment, whether it is shelter or food. It makes a really impactful difference in people’s lives. Please consider a donation if you can.

Never After: The Thirteenth Fairy

One winner will receive a copy of Never After: The Thirteenth Fairy (Melissa de la Cruz)

Looks so good! I can't wait to read it

I'm a 6th grade teacher always looking for middle grades books for my students. This will be a HUGE hit!

0
I'm a 6th grade teacher always looking for middle grades books for my students. This will be a HUGE hit!
Cancel Update Comment

This gives me School for Good and Evil vibes, and I love that. The genie lamp makes me think that there may an Aladdin retelling in there somewhere, which only makes this sound better.

0
This gives me School for Good and Evil vibes, and I love that. The genie lamp makes me think that there may an Aladdin retelling in there somewhere, which only makes this sound better.
Cancel Update Comment

This book looks so good! I love that cover!

0
This book looks so good! I love that cover!
Cancel Update Comment

Oooh, my students would love this!

0
Oooh, my students would love this!
Cancel Update Comment

Looks awesome! I'd enjoy reading this WITH my daughter!

0
Looks awesome! I'd enjoy reading this WITH my daughter!
Cancel Update Comment

I enjoy the cover and think this will be fun to read.

0
I enjoy the cover and think this will be fun to read.
Cancel Update Comment

I love the concept!

0
I love the concept!
Cancel Update Comment
Previous     Next
1 2
How to resolve AdBlock issue?
X