Author Of The Week: Author Chat with Julia Ember (Ruinsong), Plus Giveaway! ~ (US Only) 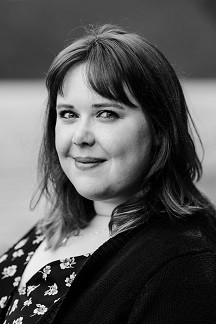 Julia Ember was born in Chicago, but raised in London and Edinburgh. She now lives in Seattle with her wife, where they are the proud parents of two cats and a very fluffy pony. She has previously worked as a teacher, bookseller and wedding cake decorator, and she is also the author of the Seafarer's Kiss duology. When she isn’t working on her prose fiction, Julia writes for video and app games. 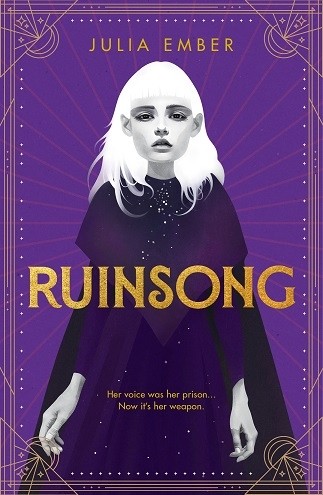 In Julia Ember's dark and lush LGBTQ+ romantic fantasy Ruinsong, two young women from rival factions must work together to reunite their country, as they wrestle with their feelings for each other.

Her voice was her prison…
Now it’s her weapon.

In a world where magic is sung, a powerful mage named Cadence has been forced to torture her country's disgraced nobility at her ruthless queen's bidding.

But when she is reunited with her childhood friend, a noblewoman with ties to the underground rebellion, she must finally make a choice: Take a stand to free their country from oppression, or follow in the queen’s footsteps and become a monster herself.

It’s a real toss up between Cadence and Queen Elene! I think Cadence is the most like me, and so I understand her the best out of any of the characters in the book. We’re both indecisive and tend to avoid conflict until we absolutely can’t, we’re both extremely attached to our ‘art’ and fiercely protective of our friends!

Queen Elene was fun to write because I enjoy writing really terrible villains, and I think her backstory, her personal beliefs about the how the country should progress and her attachment to Cadence give her a lot of nuance. She also has amazing fashion sense.

Sort of both? I had written about three chapters of my draft before I decided on the title of ‘Ruinsong’ but was still a long long way away from having a finished novel!

I am still really proud of the opening scene! It took me quite a few rewrites to get it right, and I think it strikes such a haunting note. Without giving too many spoilers, I’m also proud of the first scene the girls meet again, which takes place at a hospital where Cadence is healing. They have a pretty heated argument, and getting the dialogue right also took me quite a bit of work and rewrites!

Not to rush! When I first started trying to get published, I was in such a hurry. I wanted to query, I wanted to go on submission and I really wanted to see my books in print. But, slowing down has helped me produce much better work, which in turn has been more likely to sell. I am a fast drafter, but it takes me a long time to edit the book and I need to take frequent breaks from manuscripts to let them percolate. Allowing myself that time has been really beneficial to my work.

I love the back cover illustration the best! It shows both of the narrating characters embracing, and it’s just such a sweet, tender illustration – but at the same time you can really see the determination in Cadence’s expression. When I first saw it, I literally gasped! 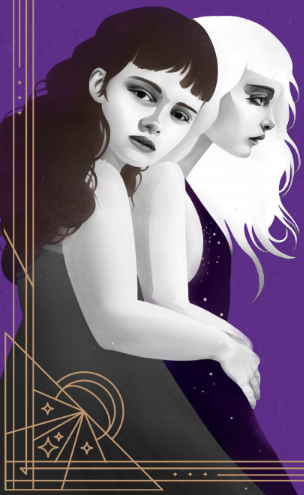 That’s a really hard question because there are so many great looking books coming out next year! Really looking forward to Alexandra Overy’s These Feathered Flames, a retelling of the Russian firebird fairy tale, as well as A Dark and Hollow Star by Ashley Shuttleworth – I love stories about elves and fae, and this is the first f/f book about fae I’ve seen!

Another tough one! I absolutely adored Tamsyn Muir’s Gideon the Ninth – sign me up for sweet lesbian sword-jocks and prickly necromancers pretending not to be in love forever! I also loved Girl, Serpent, Thorn by Melissa Bashardoust and Cemetery Boys by Aiden Thomas!

YABC:  Which was the most difficult or emotional scene to write?

There’s a scene near the beginning of the book when Remi’s father takes her into the city to meet a new suitor, hoping she’ll agree to marry him. Remi is not out as a lesbian to her family, and as they ride into the city, she reflects on what it might mean for her to tell them. She’s been raised in the more rigid views of the noble class and she worries that her parents will reject her. Then later in the scene, when she first meets Nolan, Remi is crushed by how seemingly perfect he is – good-looking, friendly, sweet – and she feels like something must be wrong with her because she’s immune to his charms. It was a really difficult scene for me to write because I also struggled to come out to my family, and felt for quite a while that there was something wrong with me for being uninterested in the same people as most of my straight friends.

Revising! I actually find drafting pretty stressful because until I have a version on the page, I don’t always know if the story is going to work out. Sometimes, I can write a killer opening scene but not know where to go from there, or I have an idea for a character or a setting, but no real plot. For me, there’s always a hurdle at about the 15,000 word mark (40 pages) and a lot of projects fall apart at that stage. Once I have a complete draft, even if it’s 45,000 words long and needs to be expanded a lot, I know I can finish, I know how lots of plot threads will come together and it takes a lot of the unknowing out of the process for me! I don’t function well with uncertainty!

This book sounds phenomenal, and the cover is gorgeous! Really looking forward to it!

0
This book sounds phenomenal, and the cover is gorgeous! Really looking forward to it!
Cancel Update Comment

The cover is striking. The synopsis is fascinating and original.

0
The cover is striking. The synopsis is fascinating and original.
Cancel Update Comment

I'm in love with this cover! This book is a must read for me.

0
I'm in love with this cover! This book is a must read for me.
Cancel Update Comment