Author Chat with Tom O' Donnell (Homerooms & Hall Passes), Plus Giveaway! ~ (US Only) Today we're excited to chat with Tom O'Donnell author of

Read on for more about Tom and his book, plus an giveaway! Tom O'Donnell is the author of the beloved Hamstersaurus Rex series, as well as Space Rocks and its sequel, Space Rocks 2: For the Love of Gelo! He has written for The New Yorker, McSweeney's, and the show TripTank on Comedy Central. His comic strips have been featured in The New York Press and The Village Voice. He lives with his family in Brooklyn, New York. Read more at www.tomisokay.com [tomisokay.com]. 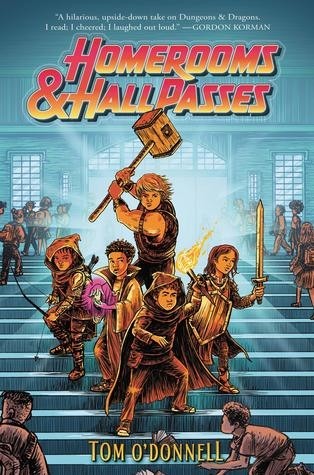 In the mystical realm of Bríandalör, every day the brave and the bold delve into hidden temples or forgotten dungeons, battling vile monsters and evil wizards to loot their treasure hoards for sweet, sweet magic items.

But in their free time, our heroes—Thromdurr the mighty barbarian, Devis the shifty thief, Vela the noble paladin, Sorrowshade the Gloom Elf assassin, and Albiorix the (good!) wizard—need to relax and unwind.

That’s why they meet up once a week to play Homerooms & Hall Passes: a role-playing game where they assume the characters of average American eighth graders.

But when the five young adventurers are magically transported into their H&H game by an ancient curse, they must band together to survive their toughest challenge yet: middle school.

Who knew that battling ogres would be easier than passing algebra or navigating the cafeteria social scene? They must use what they’ve learned from playing Homerooms & Hall Passes to figure out how to save their game world (which might actually be real...).

Dungeons & Dragons meets Jumanji in this new, laugh-out-loud adventure series from the author of the beloved Hamstersaurus Rex series.

YABC:  Do you write full time? What other writing do you do?

I am lucky enough to get to write full time. I don't just write books, I do loads of other writing. I write for TV shows. I write movie scripts. I write or websites. I even used to write (and draw!) comic strips for my local newspaper. Writing all sorts of different stuff, as opposed to focusing on one thing, helps me not get bored and stay excited about my job.

YABC:  What attracted you to middle grade literature?

Middle grade is great because this particular age is a really special time in someone's life. The things that someone gets interested in when they're 10, 11, 12 often stick with them their entire lives. Also, and this is something I only learned after starting to write children's books, kids are often much more excited to read than adults! As an author, that's what you love to see.

But I don't necessarily think about writing "for kids" when I'm working on something. No matter who it's for, I always just try my best to write something that I would like to read.

YABC:  What books did you like when you were in middle school?

My home town was so small that our elementary school went all the way up to 7th grade and high school started at 8th grade. So unfortunately I can't answer this question because I never went to middle school!

Just kidding. When I was in 6th to 8th grade, I really liked fantasy books: Lord of the Rings, Memory, Sorrow and Thorn by Tad Williams, Earthsea by Ursula Leguin, Redwall by Brian Jacques and many more that probably were not as good. I also read lots and lots of roleplaying game manuals and sourcebooks, which others might find dense or boring, but were totally fascinating to me.

YABC:  Which character that you have written is most like you?

Sam Gibbs from Hamstersaurus Rex is kind of like me in that he always feels like a bit of an awkward outsider and likes to draw. Albiorix from H&H is also a bit like me in that he would sometimes rather try to retreat into a fantasy, mastering a game system, than deal with reality.

YABC:  What about you makes you come up with all these unusual ideas (mutant hamsters, humans as aliens)?

I can't really help coming up with crazy ideas. As a writer you start to pay attention to all the weird stuff your brain thinks up. Most of the times these ideas don't make it past the scribbled note stage, but occasionally one of them really captures your imagination and you start to think more and more about it until you see a book (or movie or TV show) there.

YABC:  Do you play D & D, and if so, tell me about your role/character?

I love to play D&D. I have a couple of characters in different games. Ymoro is a half-orc ranger who distrusts both people and orcs. Brother Harbin is a shifty human warlock who pretends to be an upstanding holy man. "Jolly" Orovik is a scruffy human monk with an extremely positive mental attitude. But if I'm being honest, I like being the Dungeon Master much more than I like playing D&D. Coming up with the story and portraying many different characters (some of them not so nice) is lots of fun for me.

YABC:  What does it mean to have your book optioned for a movie?

It means that a movie studio has purchased the right to make a movie out of my book. But getting a movie made is harder than publishing a book simply because movies are much more expensive to create. Blockbusters cost hundreds of millions of dollars to make, and even the cheapest movie that you're likely to see probably cost at least $10 million! Movie studios only have so much money so the truth is that they "option" many more books than will ever get made into movies. But fingers crossed for Homerooms & Hall Passes because I think it would make a terrific film.

YABC:  Will there be a sequel to Homerooms & Hallpasses or are you writing anything else you can tell us about?

I am currently finishing the second book in the Homerooms & Hall Passes series. It should be coming out around this time next year!

YABC:  What question do you wish people would ask you?

"Aside from writing, what's the most important skill a writer needs to develop?"

The book sounds good, looking forward to reading it!

The cover is hilarious which matches the promised humor in the synopsis.

0
The cover is hilarious which matches the promised humor in the synopsis.
Cancel Update Comment