Author Chat with Tamara Ireland Stone (Little Do We Know), Plus Giveaway!

May 31 Posted by Kayla King, Staff Reviewer in News & Updates Today we're excited to chat with Tamara Ireland Stone, author of Little Do We Know. Read on for more about Tamara and her book, plus a giveaway!

Tamara Ireland Stone writes young adult and middle grade novels. Her New York Times bestseller, Every Last Word, won the Cybils Young Adult Fiction Award, the Georgia Peach Book Award, and was a YALSA Teens’ Top Ten pick. She is also the author of Time Between Us, which has been published in over twenty countries; its sequel, Time After Time; and Click’d, the first book in her new middle-grade series.

Before she began writing fiction full time, Tamara spent twenty years in the technology industry. She co-founded a woman-owned marketing strategy and communications firm where she worked with small startups as well as some of the world’s largest software companies. When she’s not writing, she enjoys skiing, seeing live music, watching movies, and spending time with her husband and two children. She lives in the San Francisco Bay Area. Visit her at TamaraIrelandStone.com.

Meet Little Do We Know! 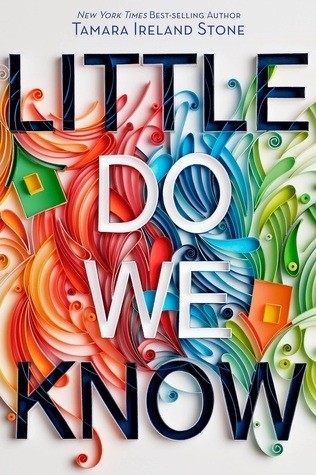 Next-door neighbors and ex-best friends Hannah and Emory haven't spoken in months. Not since the fight—the one where they said things they couldn't take back.

Now, Emory is fine-tuning her UCLA performing arts application and trying to make the most of the months she has left with her boyfriend, Luke, before they head off to separate colleges. Meanwhile, Hannah's strong faith is shaken when her family's financial problems come to light, and she finds herself turning to unexpected places—and people—for answers to the difficult questions she's suddenly facing.

No matter how much Hannah and Emory desperately want to bridge the thirty-six steps between their bedroom windows, they can't. Not anymore.Until their paths cross unexpectedly when, one night, Hannah finds Luke doubled over in his car outside her house. In the aftermath of the accident, all three struggle to understand what happened in their own ways. But when a devastating secret about Hannah and Emory's argument ultimately comes to light, they must all reexamine the things they hold true.In alternating chapters, a skeptic and a believer piece together the story of their complex relationship with help from the boy caught somewhere in the middle. New York Times best-selling author Tamara Ireland Stone deftly crafts a moving portrait of faith, love, and friendship.

LITTLE DO WE KNOW is more inspired by personal experience than anything I’ve written before. Hannah and Emory’s friendship was heavily inspired by my relationship with my own best friend. Luke’s storyline was inspired by two people I’ve known who had near-death experiences. And this might sound weird, but this story was also inspired by a character I created in an earlier novel. In EVERY LAST WORD, Caroline helps Sam learn to be brave with her words, and after I finished writing that book, I decided I needed to be braver with mine. LITTLE DO WE KNOW scared me most, so I wrote it. I think Caroline would be proud of me.

The title came out of nowhere and I loved it immediately. LITTLE DO WE KNOW says exactly what the book is about: Not knowing the answer to life’s greatest mystery, figuring out what you believe, and respecting what everyone else believes. I thought that was a timely topic when I first began writing this book in 2014. Today, in an environment more focused on dividing us because of who we are and what we think than uniting us as human beings, it feels even more important.

Who is your favorite character in Little Do We Know?
This one is difficult, because the story told in alternating chapters between Hannah and Emory, and I love them both! But I have a soft spot for Emory. She’s outspoken and fierce, she knows who she is, and she doesn’t try to be anyone else to get people’s approval. It took me a long time to figure out how to bring her to life on the page, but I finally wrote this one scene and it was as if she stepped into the room and yelled, “Here I am!” I never lost her after that.

The scene takes place early in the story. Emory’s principal sends her home to change because her tank top is in violation of the dress code, but she convinces him to let her stay if she covers up. She goes to the theater, riffles through the costumes, and finds a bright purple feather boa, which she wears for the rest of the day. That’s my Emory.

Which was the most difficult or emotional scene to write?

The scenes around Emory’s secret were emotionally exhausting to write. I don’t want to give anything away here. You’ll know them when you read them.

There was also a scene I didn’t expect to be so difficult. Near the end of the story, Hannah has to come to terms with her role in the fight with Emory and admit—not only to herself but also to her dad—how huge her mistake truly was. It’s a moment of clarity for her, when she suddenly sees the world from her best friend’s point of view, and a moment of brutal honesty between her and her father. It took me a long time to get this scene right, but I love how it turned out.

Emory has the lead in the school play, Our Town, and there’s a famous monologue at the end where she has to say goodbye to the things she loves. Emory is having a difficult time with the scene, so her drama teacher makes the entire cast do an exercise to help all of them embrace the moment and make it more personal. It turned out to be a heart-wrenching scene, and I was in tears when I wrote the last line of that chapter. That moment set the stage (pun intended) for all the theater scenes and really helped shape the tight friendships that exist between Emory and her drama friends.

I am so in love with this cover! The artwork is made up entirely of cut, curled, colored paper. It was created by artist, Sabeena Karnik, who also created the art for TIME AND TIME AGAIN, the bind-up of my first two novels, TIME BETWEEN US and TIME AFTER TIME. I love how she uses vibrant colors and movement to communicate the chaos that exists between Hannah’s and Emory’s houses. Hyperion Teens created a cover you’re going to want to pick up off the shelf and run your fingers over to truly appreciate.

No question—revising. Given my personality, I would think I’d prefer drafting, where there are no rules or limits. But the perfectionist in me has a hard time letting the story be horrible (and my first drafts are always horrible). I have to constantly remind myself that it’s okay that it sucks and that it will only get better. I always hit my stride when I get to start working with my editors.

I am absolutely in awe of Robin Benway’s writing, and it’s on such lovely display in her newest novel, Far From the Tree. It’s not often that a book truly grabs me from the very first chapter, but this one did, and once it had me it didn’t let go. If you haven’t picked up this book yet, please do. It’s gorgeous in every way.

As much as I adore writing for young adults, I’ve fallen in love with writing for younger kids, too. My first middle grade novel, CLICK’D, came out last September and I’m currently working on the second book in the series, which will be out next February. These books are pure fun. They’re all about girl-power, positive friendships, going after what you want, and embracing the things (and people) that make you your best self. I love Allie and her friends, and I’m having a blast creating their stories.

Little Do We Know

Two winners will receive a copy of Tamara Ireland Stone (US only).