More Than Just A Pretty Face.

Read on for more about Syed and her book, plus a giveaway!

Syed M. Masood grew up in Karachi, Pakistan, and now lives with his wife and children in Sacramento, California, where he is a practicing attorney. He wrote a few couplets in Urdu when he was a teenager, and his family still tells everyone he is an Urdu poet. He is not. More Than Just a Pretty Face is his debut young adult novel. 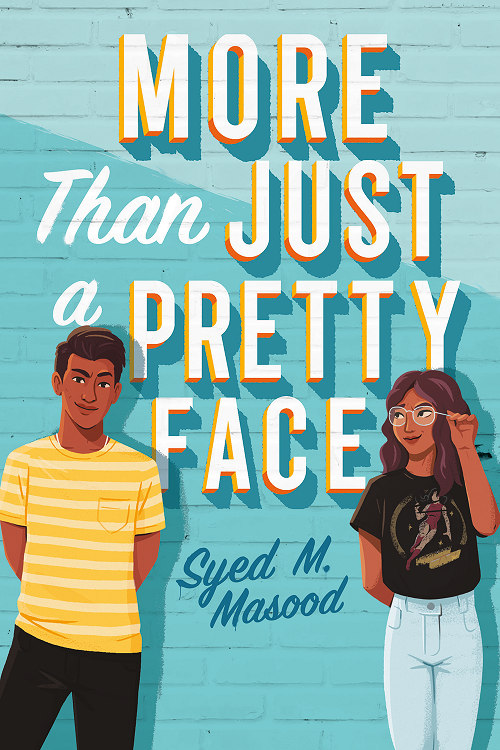 For fans of Becky Albertalli and Jenny Han, a sweetly funny YA rom-com debut about falling in love, familial expectations, and being a Renaissance Man.

Danyal Jilani doesn't lack confidence. He may not be the smartest guy in the room, but he's funny, gorgeous, and going to make a great chef one day. His father doesn't approve of his career choice, but that hardly matters. What does matter is the opinion of Danyal's longtime crush, the perfect-in-all-ways Kaval, and her family, who consider him a less than ideal arranged marriage prospect.

When Danyal gets selected for Renaissance Man--a school-wide academic championship--it's the perfect opportunity to show everyone he's smarter than they think. He recruits the brilliant, totally-uninterested-in-him Bisma to help with the competition, but the more time Danyal spends with her...the more he learns from her...the more he cooks for her...the more he realizes that happiness may be staring him right in his pretty face.

Do you have a favorite writing snack?

No, but only because coffee isn’t a snack. Usually when I’m drafting or revising, I only get to sleep three or four hours a night. I definitely don’t recommend it. But I have a demanding day job and kids, so I have to make time to write somewhere. Basically, when I’m on a deadline or the words are flowing, caffeine becomes my main food group.

I prefer drafting. It’s more painful, but it is also more exciting. I don’t plot. At all. I just start writing. This is not exactly efficient—I end up discarding a lot of words—but what’s cool about it is that I don’t know where the story is going any more than the reader does. I’m always interested to see how things are going to end. Drafting is like telling myself the story for the first time.

How much space do we have? Seriously though, right now I’m reading Kylie Schachte’s YOU’RE NEXT. I’ve got THE KINGDOM OF COPPER by S.A. Charkaborty and Leah Johnson’s YOU SHOULD SEE ME IN A CROWN up next, probably to be followed by Gary Shteyngart’s LITTLE FAILURE. I’m also reading Rumi’s MASNAVI, which makes me wish I had Persian as a language. I could go on and on. It’s an unending list.

RADICAL LOVE edited by Omid Safi. It’s a collection of Sufi poetry. I urge anyone who picks it up to not skip the introduction.

The novel. I’m not good with titles for some reason. So far my agent or my editors have had to come up with those. That probably isn’t going to change any time soon.

There is a scene relatively early on in the book where Danyal, the protagonist, stands up to Bisma Akram’s father when her father is being cruel to her. There were tears in my eyes when I was writing that. It was also the moment I knew I had something. What was it Robert Frost said? “No tears in the writer, no tears in the reader.”

Write the truth you know. This is especially true if you’re working on an #ownvoices book and you’re writing about a sensitive and complex identity—in my case, Muslims. You’re never going to be able to please everyone either within or without the identity you’re writing about. People have their own notions about how certain groups of people ought to live, how they ought to behave and how they ought to be portrayed.

I’ve come to realize that as long as you’ve told the truth as you know it, as best you can and with love, you’ll always be happy with your work no matter what anyone says.

My next book, which is for adults, THE BAD MUSLIM DISCOUNT comes out on 11/17/20, and I’m very excited about that. I’m also currently revising a YA manuscript about a boy who has been raised and homeschooled by his hundred-year-old great-grandfather and who is having to adjust to a more mainstream life now that he’s attending high school. He ends up as the dance partner of a girl who confuses him entirely, and vice-versa. It’ll be out next year.

More Than Just A Pretty Face

I read an arc of this and loved it!

0
I read an arc of this and loved it!
Cancel Update Comment

Sounds like a book both my daughter and I will enjoy!

This sounds so awesome!!!

This book looks so cute!!

Sounds so adorable! We all need a little cuteness!!

0
Sounds so adorable! We all need a little cuteness!!
Cancel Update Comment

Love this cover. It's so cute.

0
Love this cover. It's so cute.
Cancel Update Comment

Aww the cover is cute

This sounds like such a sweet read. I think my daughter would LOVE it! Adorable cover, too.

0
This sounds like such a sweet read. I think my daughter would LOVE it! Adorable cover, too. :)
Cancel Update Comment
Previous     Next
1 2
How to resolve AdBlock issue?
X

Today we're excited to chat with Maggie P. Chang author of Geraldine Pu and Her Lunch Box,Too!  Read on for more about Maggie, her book, plus an giveaway!        Meet&n...
Posted in News & Updates
Read more

It's Live! Cover Reveal: Kelcie Murphy and the Academy for the Unbreakable Arts (Erika Lewis), Plus Giveaway! ~ (US Only)

Author Chat with BonHyung Jeong (Kyle's Little Sister), Plus Giveaway! ~ (US Only)

Today we're excited to chat with BonHyung Jeong author of Kyle's Little Sister!  Read on for more about BonHyung, her book, plus an giveaway!        Meet  BonHyung...
Posted in News & Updates
Read more

Author Chat with Anna Lazowski (T. Rexes Can't Tie Their Shoes), Plus Giveaway! ~ (US Only)

Today we're excited to chat with Anna Lazowski author of T. Rexes Can't Tie Their Shoes.  Read on for more about Anna, her book, plus an giveaway!        Meet  Ann...
Posted in News & Updates
Read more

Beneath the Waves
5.0
0.0 (0)
Open this charming read-aloud book and you'll find amazing animal...

Off the Record
5.0
0.0 (0)
The behind-the-scenes access of Almost Famous meets the searing revelations...