Author Chat with Stephanie Perkins (Anna and the French Kiss) Plus Giveaway! ~ (US Only) Today we're excited to chat with Stephanie Perkins author of

Anna and the French Kiss.

Read on for more about Stephanie and her book, plus a giveaway!

STEPHANIE PERKINS is the New York Times bestselling author and anthology editor of multiple books, including There's Someone Inside Your House, Anna and the French Kiss, Lola and the Boy Next Door, and Isla and the Happily Ever After. She has always worked with books--first as a bookseller, then as a librarian, and now as a novelist. Stephanie lives in the mountains of North Carolina with her husband. Every room of their house is painted a different color of the rainbow.

Meet Anna and The French Kiss! 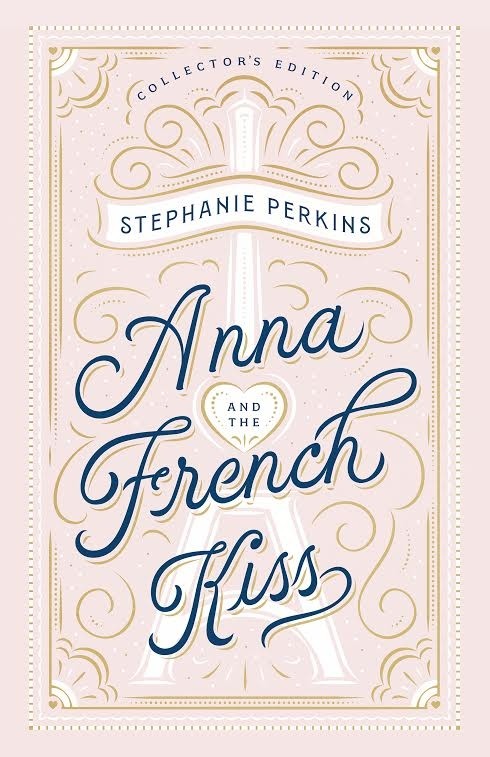 Celebrate the 10th anniversary of this beloved romance classic with a one-of-a-kind, beautifully luxe edition that includes all-new bonus content.

“Stephanie Perkins’s characters fall in love the way we all want to, in real time and for good.” -Rainbow Rowell,

Anna can’t wait for her senior year in Atlanta, where she has a great job, a loyal best friend, and a crush on the verge of becoming more. So she’s less than thrilled when her father unexpectedly ships her off to boarding school in Paris—until she meets Etienne St. Clair, the perfect boy. The only problem? He’s taken, and Anna might be, too, if anything comes of her crush back home. Will a year of romantic near-misses end in the French kiss Anna awaits?

This answer is a deep cut, but: Hercules.

I don’t actually eat while writing because it can get distracting and messy. If I’m hungry, I’ll use it as an opportunity to stretch my legs and eat the snack away from my desk. And, although it’s a very boring and practical answer, my snacks are always healthy, so they’ll give me a more sustained and usable burst of energy.

Writing is a job, not an identity. It’s important to have a life away from publishing.

Oh, it’s gorgeous, isn’t it? It’s as pretty and delicate as a macaron.

The Voting Booth by Brandy Colbert.

My second YA horror novel is called The Woods Are Always Watching, and it’ll be published in 2021.

There’s already an Anna and the French Kiss audiobook, and I’ve been fortunate that the book has been translated into many languages over the years. As for a screen adaptation, it’s been optioned a few times, and it’s currently under contract again. We’ll see.

However, my first YA horror novel, a slasher called There’s Someone Inside Your House, was recently turned into a Netflix film, and it will be released in 2021!

I really, really did not enjoy writing the scene in Anna that involves the details of Étienne’s mother’s cancer. It’s a moment when the novel dips out of being sort of a contemporary fairy tale and is touched by reality and tragedy. The research was devastating. I had to set the scene in a patisserie just to give it some sort of balance with the rest of the book. I needed all of those cakes.

My latest book is technically There’s Someone Inside Your House, which was published in 2017. It had a main protagonist, but there were actually nine POVs total, and they were all challenging because they had wildly different interests and perspectives. There was so much research—so much more than I had anticipated—in that book.

America has a truly heinous mass incarceration problem, and I’m very much interested and involved in providing relief and release for all the prisoners who shouldn’t be there.

Anna and the French Kiss

you have done a great job I hope you will do much better in the future 3pl companies in hong kong.

0
you have done a great job I hope you will do much better in the future [url=http://www.cnlogistics.com.hk/]3pl companies in hong kong[/url].
Cancel Update Comment

It looks really interesting and I like the cover!

I love this cover, and I've been wanting to read this book!

0
I love this cover, and I've been wanting to read this book!
Cancel Update Comment

I have the entire series but this cover! just watched emily in paris, reading about anna in paris, need more paris

0
I have the entire series but this cover! just watched emily in paris, reading about anna in paris, need more paris
Cancel Update Comment

I love this book so much and the 10th anniversary edition is GORGEOUS!!

0
I love this book so much and the 10th anniversary edition is GORGEOUS!!
Cancel Update Comment

This new edition is beautiful!!

The collector's edition cover is very pretty. The synopsis sounds cute and romantic. Sounds like a fun read.

0
The collector's edition cover is very pretty. The synopsis sounds cute and romantic. Sounds like a fun read.
Cancel Update Comment
Previous     Next
1 2
How to resolve AdBlock issue?
X