Today we are chatting with Sarah Raughley, author of

The Bones Of Ruin!

Read on for more about Sarah, her book, and giveaway! 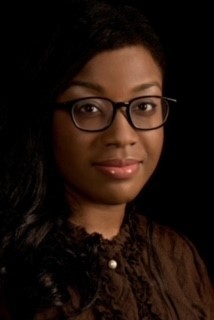 Sarah Raughley grew up in Southern Ontario writing stories about freakish little girls with powers because she secretly wanted to be one. She is a huge fangirl of anything from manga to sci-fi fantasy TV to Japanese role-playing games and other geeky things, all of which have largely inspired her writing. Sarah has been nominated for the Aurora Award for Best YA Novel and works in the community doing writing workshops for youths and adults. On top of being a YA writer, Sarah has a PhD in English, which makes her a doctor, so it turns out she didn’t have to go to medical school after all. As an academic, Sarah has taught undergraduate courses and acted as a postdoctoral fellow. Her research concerns representations of race and gender in popular media culture, youth culture, and postcolonialism. She has written and edited articles in political, cultural, and academic publications. She continues to use her voice for good. You can find her online at SarahRaughley.com.

Meet The Bones Of Ruin! 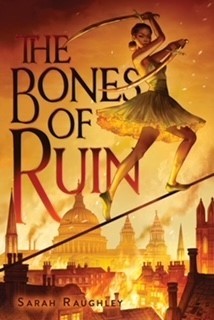 An African tightrope walker who can’t die gets embroiled in a secret society’s deadly gladiatorial tournament in this thrilling historical fantasy set in an alternate 1880s London, perfect for fans of The Last Magician and The Gilded Wolves.

As an African tightrope dancer in Victorian London, Iris is used to being strange. She is certainly a strange sight for leering British audiences always eager for the spectacle of colonial curiosity. But Iris also has a secret that even “strange” doesn’t capture…​

Haunted by her unnatural power and with no memories of her past, Iris is obsessed with discovering who she is. But that mission gets more complicated when she meets the dark and alluring Adam Temple, a member of a mysterious order called the Enlightenment Committee. Adam seems to know much more about her than he lets on, and he shares with her a terrifying revelation: the world is ending, and the Committee will decide who lives…and who doesn’t.

To help them choose a leader for the upcoming apocalypse, the Committee is holding the Tournament of Freaks, a macabre competition made up of vicious fighters with fantastical abilities. Adam wants Iris to be his champion, and in return he promises her the one thing she wants most: the truth about who she really is.

If Iris wants to learn about her shadowy past, she has no choice but to fight. But the further she gets in the grisly tournament, the more she begins to remember—and the more she wonders if the truth is something best left forgotten.

I just love Victoriana and I’ve done a lot of research into that period with regards to politics and society and how BIPOC lived in 19th century Europe. It made me want to write a book in that era. When I learned about human zoos as well, which was really popular in the Western World in the 19th century right up until the 1940s in some cases, I kind of wanted to shed some light on that history as well.

The proposal, the title, than the novel! Ha. I’m so bad with titles, but I’m getting better! Though the original title wasn’t bad, The Bones of Ruin sounds so much better. As for what the original title is? We’ll keep that a secret :)

This is sooo shallow but all the smexy romance scenes! I’m usually really shy so being able to delve deep into romance and relationships in this book makes me feel like I’m, um, expanding my repertoire? lol

Write for you. Not everyone will like your work, but that’s okay. I have very strong opinions about the story I’ve consumed over the years so every writer should expect others to be the same towards their work. What matters is that you keep writing, keep improving, keep trying --  and write what genuinely fulfills you.

The beautiful, badass Black circus girl on the front carrying her blades ready to go a-battling! I’m so glad to see heroines of all backgrounds being represented on covers more and more! And the artist, Khadi Khatib really captured the action-heavy, chaotic, apocalyptic Victorian feel!

Well, The Bones of Ruin is a trilogy. I am so excited to share the next two books with the world. I’m also, of course, going to keep working on other stories in the children’s market. I’m hoping to continue to share my work with the world!

I think anything that really shows the reader the conflicting emotions of the main character is difficult. Especially with how complex her character arc is, topped off with the fact that she’s a character who technically can’t die. How do you make the reader worry about the safety and wellbeing of an immortal character embroiled in a tournament to the death? There is a way—more specifically, to get the reader to sympathize with the character’s struggle, and to understand that struggle as multifaceted. And most importantly, to communicate to the reader that there are other stakes that matter other than physical death.

I think Rin. She’s a member of the famed ‘Amazons’ of the Kingdom of Dahomey in 19th century West Africa, the youngest member of their reaper regiment. She’s very serious owed to her training and traumatizing past, and so one has to convey her multifaceted emotions within her limited well expression. There are a lot of characters in the book and only so many pages, but I did my best to make them pop off the page.

Revising, because then you have something to work with. Drafting it’s just you, your outline and a blank computer screen. Eek!

Not giving up. No matter how many times you get beat down, whether by other people, by words, by life, you just have to keep getting up and trying your hardest. One day, things will fall into place.

The Bones Of Ruin

Love this cover! This book looks so good!!!

I'm so excited for this one!!

0
I'm so excited for this one!!
Cancel Update Comment

The cover looks great and the book sounds really interesting!

This cover is beautiful and the synopsis sounds fun to read.

0
This cover is beautiful and the synopsis sounds fun to read.
Cancel Update Comment

The cover is golden and beautiful. I love the setting and the main character.