Read on for more about Sarah, her book, plus an giveaway!

SARAH JEAN HORWITZ grew up next door to a cemetery and down the street from an abandoned fairy-tale theme park, which probably explains a lot. She currently lives near Boston, MA. Find her on Twitter, @sunshineJHwitz, or at sarahjeanhorwitz.com [sarahjeanhorwitz.com]. 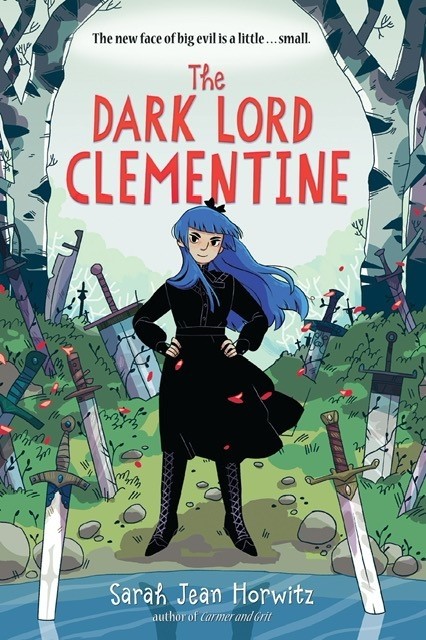 Dastardly deeds aren’t exactly the first things that come to mind when one hears the name “Clementine,” but as the sole heir of the infamous Dark Lord Elithor, twelve-year-old Clementine Morcerous has been groomed since birth to be the best (worst?) Evil Overlord she can be. But everything changes the day her father is cursed by a mysterious rival.

Now, Clementine must not only search for a way to break the curse, but also take on the full responsibilities of the Dark Lord. But when it’s time for her to perform dastardly deeds against the townspeople—including her brand-new friends—she begins to question her father’s code of good and evil. What if the Dark Lord Clementine doesn’t want to be a dark lord after all?

YABC: Do you have a favorite writing snack?

I tend not to eat when I’m writing, but I’m not above using a snack as reward for getting some writing done! One of my favorite treats are these Dutch cookies called stroopwafels. Two thin layers of wafer cookie with a caramel filling between them. Yum!

I think I’ve learned not to be so much of a perfectionist, and to have confidence in my work. There’s no such thing as a perfect book, and you can’t please everyone. If I’m happy enough with a book, and my editor is happy enough, then I can only trust that at least some readers will also be happy with it!

The House in the Cerulean Sea by T.J. Klune has been on my list for a while and was just recommended to me again, so I think I’ll finally dive into it soon. The 2020 Nebula Awards finalists have also been recently announced, so I’m going to read through all of those great science fiction and fantasy short stories and at least most of the novelettes.

I never got around to reading Jeremy Thatcher, Dragon Hatcher by Bruce Coville when I was a kid, and I just read it recently, and it was so good I wish I had written it!

I’m working on a new middle grade fantasy novel as well as my first fantasy for adults. I only have the beginning chunks done for both of them, so it remains to be seen if anything much will come of either, but I’m hopeful.

YABC: Are there any film adaptations, tv shows, audiobooks, or other adaptations in the works for this book?

There is an audiobook! It’s narrated by the wonderful Merissa Czyz and available most places one can get audiobooks. As for film/TV...we shall see!

One of the most difficult scenes to write in The Dark Lord Clementine was the “castle invasion practice” scene with the knights and the scarecrows. (Won’t say much more than that, because of spoilers.) Action scenes don’t come super naturally to me, and the battle logistics - even though it was a fake battle with a bunch of eleven-year-olds! - were tough to plan out. I had to make a diagram of Clementine’s castle to keep track of what everyone was doing and where they were doing it.

I have been told I write very funny emails. It’s a bit of a secret club, though - I try to keep things professional with most people. Mostly, I have to know that the recipient won’t mind a lot of caps lock and Tumblr-circa-2008-style writing.

YABC: What advice would you give to new writers?

Be at least a little familiar with the genre you want to write in. You don’t have to read every new release, but you should have a general idea of what’s out there. My second piece of advice, as least for plot-driven books, is to study film structure. I was a screenwriting student before I wrote books, and I think the skills I learned in terms of how to create a tightly structured story were invaluable to me when I turned to writing fantasy books for kids. 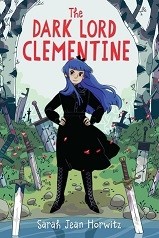 I have been wanting to read this book, it looks so good!

0
I have been wanting to read this book, it looks so good!
Cancel Update Comment

I love the fun cover and the synopsis sounds fun too.

0
I love the fun cover and the synopsis sounds fun too.
Cancel Update Comment