Today we are chatting with Saadia Faruqu, author of

Yusuf Azeem Is Not A Hero!

Read on for more about Saadia, her book, and giveaway! Saadia Faruqi is a Pakistani-American writer, interfaith activist, and cultural-sensitivity trainer. She is the author of the children’s early-reader series Yasmin, the middle grade novel A Thousand Questions, and the coauthor of the middle grade novel A Place at the Table. She was profiled in O magazine as a woman making a difference in her community and serves as editor in chief of Blue Minaret, a magazine for Muslim art, poetry, and prose. She resides in Houston, TX, with her family.

Meet Yusuf Azeem Is Not A Hero! 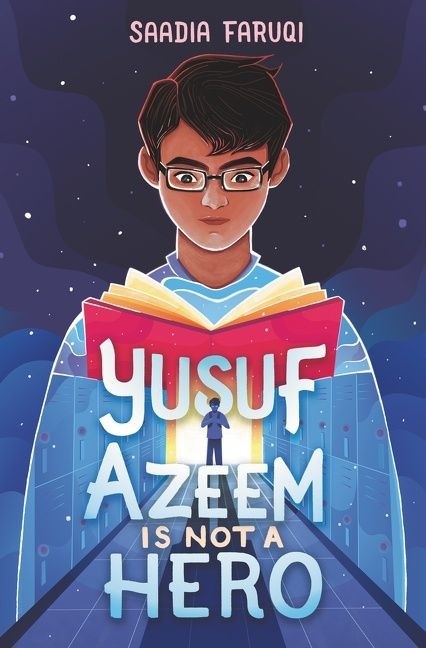 At a time when we are all asking questions about identity, grief, and how to stand up for what is right, this book by the author of A Thousand Questions will hit home with young readers who love Hena Khan and Varian Johnson—or anyone struggling to understand recent U.S. history and how it still affects us today.

Yusuf Azeem has spent all his life in the small town of Frey, Texas—and nearly that long waiting for the chance to participate in the regional robotics competition, which he just knows he can win.

Only, this year is going to be more difficult than he thought. Because this year is the twentieth anniversary of the 9/11 terrorist attacks, an anniversary that has everyone in his Muslim community on edge.

With “Never Forget” banners everywhere and a hostile group of townspeople protesting the new mosque, Yusuf realizes that the country’s anger from two decades ago hasn’t gone away. Can he hold onto his joy—and his friendships—in the face of heartache and prejudice?

I knew I wanted to write something related to 9/11 because of my own children’s experiences growing up as first generation American Muslim kids in a post 9/11 world. I wanted to write something very hard-hitting that highlighted all the ways discrimination and prejudice has become a part of life for Muslim kids and families in the last 20 years. Then I read the account of Ahmad Mohamad, nicknamed “the clock boy” who was assumed to be a terrorist by his teachers, and it really shook me because that could so easily have been my son. That’s when the story of YUSUF AZEEM was born.

I just love Yusuf, the main character. He’s gentle, sweet and nerdy, and all he wants to do is make his family and school proud of him. He’s very smart, loves robotics, and an eternal optimist. No matter what life throws at him, he’s determined to try his best. All these qualities are tested in the story when life keeps throwing curveball after curveball, but it makes him even more determined to be heroic.

Seeing a Muslim boy on the cover of a middle grade novel is a big thrill for me! There are more Muslim characters in kidlit nowadays, but very few are boys. I found that the cover – by the talented Hazem Asif - does such a great job portraying Yusuf’s personality, as well as the journal that he reads about 9/11.

~ SPOILER ALERT! ~ Towards the end of the book is a scene where Yusuf is arrested for something he didn’t do. That was such a difficult scene for me to write, firstly because I didn’t want it to get too dark for my young readers, and secondly because I kept thinking of my own son and how he’d react if he was in a similar situation. I had to re-write the scene several times before I could do it justice.

The bullies were difficult to write, both Ethan the kid bully, and his father Trevor. It’s always so tempting to write cardboard villains who are completely evil. I had to keep reminding myself that human being are complicated, and even bad people have good qualities. I wanted to show these villains to be as complicated as the other characters, and that took time to accomplish.

I’ve learned so much along the way. Mostly, I’ve learned about patience, because everything in the publishing journey takes so long. I’ve learned the craft of writing, both from author friends as well as my brilliant editors. I’ve worked hard on my revision skills, and have tried to perfect the art of how to revise and edit a story until it’s a jewel. There’s still so much left to learn, because every book teaches you something.

I enjoy drafting best. It’s the time when you’re thinking up the story in your head, creating the characters, figuring out the plot. That’s the part of the writing process I really relish: the creation of something amazing from scratch. I outline meticulously before I begin, and try to have very clean first drafts, so that I don’t have to revise significantly later. All that helps the writing process for me.

I’m working on several new projects, including a middle grade graphic novel SAVING SUNSHINE from First Second, and a pet-sitting series from Scholastic. In 2022 I’ll be releasing a nonfiction biography project THE WONDERS WE SEEK: 30 INCREDIBLE MUSLIMS WHO HELPED SHAPE THE WORLD which I’m super excited about.

I think bringing people together over shared stories and experiences is my superpower. I’ve been an interfaith activist for the last 20 years, and I love talking to people who are different from me, learning from them, and sharing my stories. I try to replicate that in my writing, through stories that can showcase experiences of “the other” in a way that is welcoming and authentic.

Yusuf Azeem Is Not A Hero

I like the cover and think this book sounds exciting.

This one is on my TBR pile!

0
This one is on my TBR pile!
Cancel Update Comment

I love the cover and the story sounds exciting and relevant.