Author Chat with Ruth Freeman (How To Save A Superhero), Plus Giveaway! ~ (US Only) Today we are chatting with Ruth Freeman, author of

How To Save A Superhero!

Read on for more about Ruth, her book, and a giveaway! 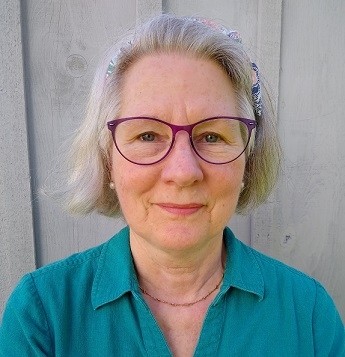 Ruth Freeman is the author of One Good Thing About America, which received a Golden Kite Honor Award and was called a "touching novel" by School Library Journal. Ruth grew up in rural Pennsylvania but now lives in Maine where she teaches English language learners in an elementary school.

Meet How To Save A Superhero! 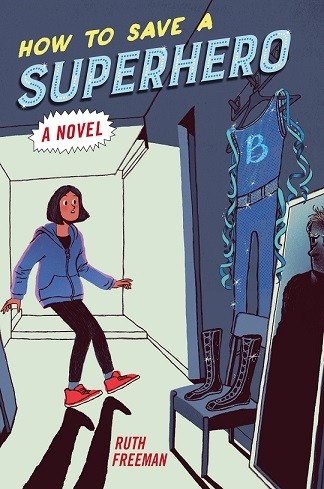 Ten-year-old Addie knows that Superheroes aren't real, and that they certainly don't hide out in retirement communities, but she may just have to change her mind. Addie and her mom never stay in one place too long. They've been up and down and all around the country. When her mom, Tish, gets a new job at Happy Valley Village Retirement Community in Pennsylvania, Addie believes they'll be on the road again in a month. But this time, something is different--make that, someone. Mr. Norris, a grumpy resident of Happy Valley and. . .a former superhero? Well, that's what Marwa, whose mom also works at Happy Valley, would try and have Addie believe. Addie and her friend Dickson know better even if there are things they can't explain. Like the time Mr. Norris was about to get hit by a car and was suddenly on the other side of the road or the way his stare seems to take root in Addie's stomach. When a man starts prowling the Happy Valley grounds, claiming to be the great-nephew of a resident, Addie, Marwa, and Dickson soon stumble into a grand conspiracy involving the Manhattan Project, a shady weapons company, and the fate of the human race, in this smart, funny middle grade novel.

After I finished my earlier book, One Good Thing About America, which is the story of a Congolese girl’s first year in America, I wondered if there was something that all kids have in common, something they know about no matter where they come from. At that time, I was teaching English Language Learners in an elementary school. I realized that everyone knows about, or at least has heard of, superheroes! Even though I didn’t know much at all about them then, the thought stuck in my head.

The next piece came as I visited my parents in their retirement home. It was like a fancy hotel or maybe a cruise ship, one with restaurants, a hair salon, gift shop, pool, library, even a bank. There was a studio for those who liked to paint, a woodworking shop for those who worked with wood, and a room of miniature trains for those who loved trains.  Residents never needed to leave the place if they didn’t want to. It was an amazing, complete world for older people and, as you might imagine, there were all kinds of interesting people who lived there. So…

“What if”…that’s the question that starts a story idea moving for me. What if a resident of a retirement home was actually a real…no, I mean, a REAL superhero? Maybe an old guy (Mr. Norris) doesn’t want anyone to know he’s a superhero. Maybe he wants to keep his identity hidden. On the other hand, of course he could just have dementia and not be a superhero at all!

I would have to say Mr. Norris, the could-be superhero, is my favorite character because he was just so much fun to spend time with and write about! The more I described him and wrote down what he said, the more I could hear my uncle Mickey’s voice. Mickey was charming, funny and smart. He was also prickly, opinionated and complained a lot. He wore old clothes, smoked a pipe, never threw anything away, and lived by himself on an island in Maine for more than 50 years. He’s gone now but he would surely roll his eyes and laugh if he knew he was the inspiration for Mr. Norris.

The novel definitely came first. However, it was still in the beginning stages when I was sitting at the kitchen table with one of my sons who loves to talk over ideas, especially where books are concerned. As I said, I was and am pretty clueless when it comes to superheroes, so he was working out what kind of superpowers Mr. Norris could have. While we were hashing that out, he was also playing around with titles and, lo and behold, he came up with How to Save a Superhero! I loved the title immediately. And it also helped shape the rest of the story because I then had to figure out how and why a superhero would need to be saved.

Keep at it and don’t get discouraged. Writing is hard work and there is no one right way to do it. I think it’s important to realize, when you’re starting out, that it’s going to take a lot of trial and error as you learn what works best for you. No one sits down and writes a perfect piece the first time. This may mean trying to write in different genres, different points of view, plotting your little heart out, or plunging in to write “by the seat of your pants,” listening to critiques. I’ve tried all of those. Every time you press “delete” or throw one more piece of paper or rejection in the trash, you’re learning a little bit more. Then try going to the library or bookstore and read books in the genre and age group you’re interested in. Sure enough, you’ll be reading along and then say to yourself, “I can do better than that!” Get angry, stay determined, and keep at it.

I can’t wait to get to my next idea! It’s been rolling around in my head for almost two years now. There is a fat binder of notes on my work table, filled with themes, characters, descriptions of the setting, and what I’ve labeled “things that could happen.” I wrote several chapters a year ago, but then stopped to work on the How to Save a Superhero revisions and copy edits. A new grandson was born and a small item named Covid-19 got in the way. But the “pause” hasn’t been all bad because it’s given me more time for reading, research, and thinking about the story on long drives. When I get back to it (soon!) I will be ready to dive into it and get it done. This winter will be the perfect time for it.

I have to put this out there: I think How to Save a Superhero would make a fantastic movie. The sweet but prickly friendship that grows between grumpy Mr. Norris and Addie would appeal to so many different ages. The rest of the quirky residents and staff, not to mention the evil Melinda Sloat and the mad scientists trying to kidnap Mr. Norris, would provide enough humor and excitement for an amazing film. Plus, there are superheroes! What’s not to love? In my humble opinion.

The climax comes at a Halloween party being held at the retirement home. The emotional tension has been building as Addie tries to keep Mr. Norris from being kidnapped by the mad scientists who are desperate to examine him. While the party is in full swing, the threats from the kidnappers turn deadly. They take Addie. In order to save her, Mr. Norris is forced to use his questionable superpowers. Addie pleads with him to stop knowing that if he indeed looks like a true superhero, the scientists will surely take him away to run their experiments on him. Fear, bravery in the face of evil, sacrificing oneself for a friend, all come into play during this scene. I wrote it straight through in one long writing session. Even when I had to work on it later, or when I read it now, my heart starts to beat faster, my eyes tear up, and I feel the emotions all over again.

When first starting out I would definitely have said I preferred drafting. The first, raw words I put down were perfect in my mind! But somewhere along the line I found that revising, or “polishing” as I think of it, is just as rewarding. You need the original idea: those wisps of magical fluff you’re pulling out of thin air and wrestling onto the page. You also, however, need the next step. The polishing part makes those words come together and shine. You may discover new themes, new directions to go in, the story becomes stronger, brighter. So, now, I really enjoy both parts of the process.

Since my story is about a possible superhero, I feel like I should have an answer for this one! When I was teaching I asked my students what was a superpower they’d like to have. They didn’t even have to think about it: either be fast or strong they said. Those powers don’t excite me too much. If I had to choose, I’d like to time travel. There are so many places and times I’d like to visit just for a day. However, I will admit I am a mere mortal with no superpowers that I know of. As a writer, though, I can imagine what it would be like to have a superpower. I can close my eyes and feel what it might be like to run at a supersonic speed, fly through the air, lift cars or buildings. Maybe that’s close to a superpower that writers have, being able to put ourselves in someone else’s shoes and imagine what it would feel like, smell like, sound like so that we can take the reader there.

I’m repeating myself, but I’ll say it again: Writing is hard work. Know that you have a lot to learn. But if you don’t write your story or poem, who will? No one else will write the piece exactly as you can. If you are passionate and determined enough, you will believe and get there. Lastly, read, read, read. Then write the book you haven’t yet been able to find on the shelf.

How To Save A Superhero

The cover is fun. A superhero novel with a twist.

0
The cover is fun. A superhero novel with a twist.
Cancel Update Comment

The cover is fun and this sounds unique and intriguing.