Author Chat with Robin D Mahle (The Fractured Empire), Plus Giveaway! ~ (US Only) Read on for more about Robin, plus an interview and an giveaway! 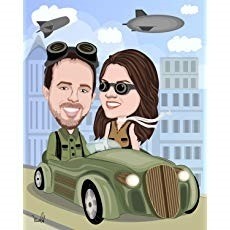 The name Robin D. Mahle represents a dynamic husband and wife storytelling team. They've travelled the world for both love and war, and a tale began to form between the two of them that just had to be told. One's love of anime and comics collided with the other's love of fiction novels to produce a story with action, captivating dialogue, and riveting prose.

The female piece to the puzzle that is Robin spends her days as a captioner for the deaf and hard of hearing. She loves to read, write, and loves all things Doctor Who. A Marine Corps veteran, her husband homeschools their offspring, lovingly nicknamed Thing 1 and Thing 2. He loves to write and spend time in his garden.They also have two fur babies: a standard full-sized poodle and a persian cat. Their family lives in Colorado after a lifetime of being way too hot in Texas. 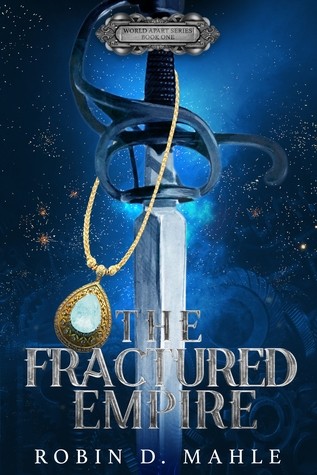 The Ceithren Empire is finally at peace, but for two very different people, the world is still upside down.

For Adelaide, her sister's death has left a gaping void. The one thing she believes will dull the pain is to take the only piece of her sister she has left to the place they'd sworn they'd go together -- the Ever Falls, a natural wonder that splits the world in two. But the journey is perilous and not everyone who seeks the Ever Falls survives.

Clark never imagined his father would be blamed for the Silent Explosion. Now, he must find a way to clear his family's name. As a member of an activist group, he's ready to steal a powerful amulet in exchange for the chance to interrogate a Professor of the Empire. Brash and maybe a little too confident, Clark embarks on a mission that puts his own life at risk.

But Clark isn't the only one after the amulet.

When the ancient artifact attaches itself to Adelaide, essentially painting a target on her back, Clark and Addie's worlds collide. Tensions rise as they work together to stay alive... and resist the temptation to kill each other before their enemies have the chance.

My husband is very into anime and manga and expansive worlds. He had crafted a general idea of a story he wanted to tell, but it was only one POV and much more of a middle grade fantasy type story. One day, I was listening to the song “Stay” by Rihanna and this back and forth love-hate story between two broken people just came to me. We combined the concepts of his intricate plot and my characters ideas and came up with this series.

That’s a toss up between Adelaide and Gunther. Addie is so flawed and real to me, but Gunther is this strong, supportive, kind, amazing character. I love seeing the world through his eyes, the way he interprets and processes the world around him, not being able to hear and having such an astounding mind.

This is definitely a tough question, but I think I’d have to say the scene between Clark and Addie on the Prince’s yacht. The scene didn’t go the way I intended it to, but to me, it’s one of the realest scenes in the book.

Well, it’s not waaay back for me, since I’m pretty much a newb. 😊 The most important thing I’ve learned is to just write, even if it feels like crap at the time. Get something down on the page and move on from it, let your characters lead their own story, and then you can go back and fix the kinks.

This cover just got a makeover, and I have to say my favorite part is the tiny hints of gears along the bottom. There is a very subtle dieselpunk theme in the first book, and I like how it’s just as subtle in the cover.

“I could no sooner choose a favorite star among the heavens.” No, really, I read so many books last year and picking one favorite is nearly impossible, but I definitely got very sucked into Michelle Lynn’s fairy tale world, beginning with Golden Curse.

It’s interesting to me, the transition from reading to writing. I have fallen in love with so many characters over the years, but I didn’t realize how deeply you could love a fictional character until I created my own.

Most of my reviews mention how realistic my characters are. I think my super power is writing real people, real relationships that form naturally instead of in a contrived manner.

I am deeply troubled by the continuous rise in human trafficking. There are few things more horrific than that, and there are several organizations that attempt to combat it that I wholeheartedly support.

The Fractured Empire, The Tempest Sea, & The Forgotton World

Love the hilt on the sword as back as background colors. It gives a mystical feel.

0
Love the hilt on the sword as back as background colors. It gives a mystical feel.
Cancel Update Comment

The cover is cool. The synopsis is very intriguing. Sounds like a thrilling series.

0
The cover is cool. The synopsis is very intriguing. Sounds like a thrilling series.
Cancel Update Comment

The cover is pretty and the story sounds very interesting. I look forward to reading it.

0
The cover is pretty and the story sounds very interesting. I look forward to reading it.
Cancel Update Comment

The cover reflects the suspenseful and action-packed synopsis.

The cover is magical and powerful. The whole series sounds highly intriguing.