Author Chat with Olivia Blacke (No Memes of Escape)! Today we are chatting with Olivia Blacke, author of

No Memes of Escape!

Read on for more about Olivia and her book! 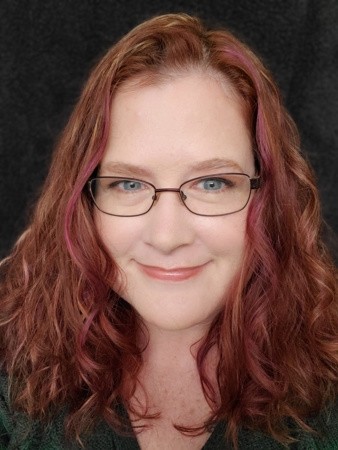 Brooklyn Murder Mysteries author Olivia Blacke writes quirky, unconventional, character-driven cozy mysteries. After shuffling around the U.S.A. from Hawaii to Maine, she currently resides with her husband and their roly-poly rescue puggle, but is forever homesick for NYC. In addition to writing, disappearing into a good book, and spending way too much time on social media, she enjoys SCUBA diving, crocheting, collecting tattoos, and baking dog cookies.

Meet No Memes of Escape! 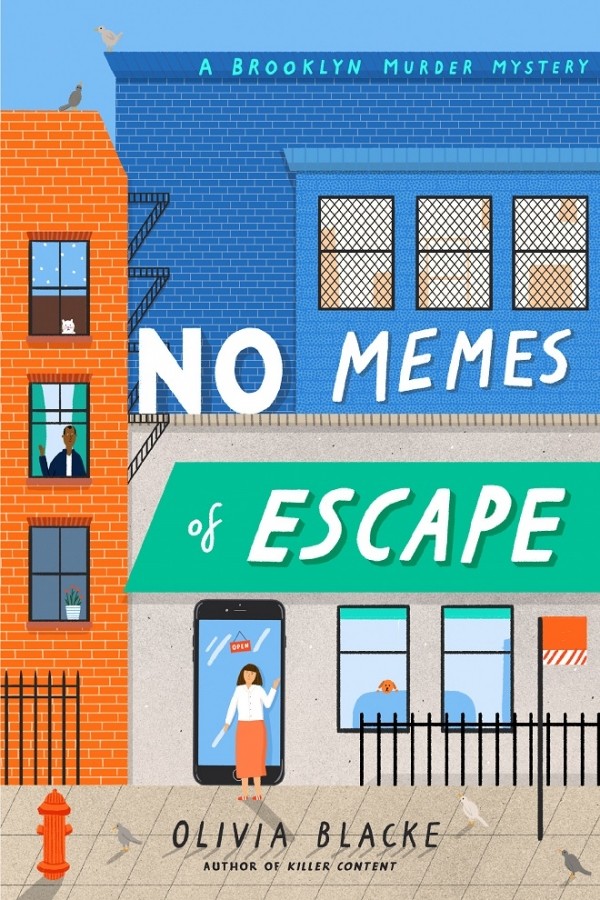 Amateur sleuth Odessa Dean is about to discover the only thing harder than finding her way out of an escape room is finding an affordable apartment in Brooklyn in this sequel to Killer Content.

Odessa Dean has made a home of Brooklyn. She has a fun job waiting tables at Untapped Books & Caf� and a new friend, Izzy, to explore the city with. When she's invited on a girls' day out escape room adventure, she jumps at the chance. It's all fun and games until the lights come on and they discover one of the girls bludgeoned to death...

The only possible suspects are Odessa and the four other players that were locked in the escape room with the victim. She refuses to believe that one of them is responsible for the murder, despite what the clues indicate. In between shifts at the caf�, Odessa splits her time interviewing the murder suspects, updating the bookstore's social media accounts, and searching for the impossible--an affordable apartment in Brooklyn.

But crime--and criminally high rent--waits for no woman. Can Odessa clear her and Izzy's names before the police decide they're guilty?

I've always been fascinated by the classic locked-room mystery, which is what NO MEMES OF ESCAPE is at its heart. Limited suspects, a laundry list of secrets, and unreliable witnesses creates a narrow focus, in which big clues sometimes slip through the cracks.

I put a little bit of myself into every character, so it’s impossible to play favorites but that’s also what makes writing the Brooklyn Murder Mysteries so enjoyable for me. Odessa Dean is me in my early twenties, moving to the big city and trying to find a place where she belongs. Izzy Wilson is the part of me that likes to jump into things without a parachute and just hope for the best. Even Todd Morris, the curmudgeonly manager at Untapped Books & Café, has a lot more in common with me than just his taste in music, which makes him fun to write as more than a stereotypically bad supervisor. I always have a blast with Detective Vincent Castillo, too, because whether or not she realizes it, Odessa is right at that age where she’s starting to understand that even authority figures – cops, bosses, parents, teachers – have lives and a personality outside of their job. Castillo is the perfect example of that, with a brusque professional exterior and a marshmallow heart.

The novel came before the title, for both KILLER CONTENT and NO MEMES OF ESCAPE. KILLER CONTENT had a working title of MURDER MOST VIRAL, until my agent suggested KILLER CONTENT instead. Which, looking back on it now, I’m so relieved that we changed it. I think I heard the word “Viral” enough in 2020/2021 to last a lifetime. As for NO MEMES OF ESCAPE, as we all know, cozy mysteries have the most fun (or should I say the most pun?) names. My editor, agent, and I were tossing around ideas that kept getting more and more absurd until I threw out NO MEMES OF ESCAPE and we all went…. “Whoa. We have a title.”

I love the scenes in the escape room. The first escape room I ever did was so chaotic. Everyone was doing their own thing, so we would ended up wasting time working on puzzles someone else had already solved. Plus, the proctor had reset the room wrong and we were literally missing a clue that made it impossible to complete the room. I’ve read a lot of mysteries like that, and they frustrate me beyond words. As a result, I make sure that all the clues a reader needs to solve the mystery are always in the book. I’ll try to distract readers and make them second guess themselves, but my ultimate goal is for a portion of my readers to get the satisfaction of solving the mystery before Odessa can while everyone else gets to experience that “How did I miss that? It’s so obvious now!” moment.

As cliché as it sounds, I learned that it takes a village to write a book. Collaborating with an agent and an editor and a whole team of professionals is a lot different that writing on your own. I’ve always had a core group of a friends that have read more horrible drafts than I’d like to admit, and now on top of that, I met a fantastic writer’s group (Hi, #Berkletes!) that really helped keep me going when things got hard. The community of writers I’ve met is absolutely amazing and I don’t know what I would do without their support.

I love the covers of KILLER CONTENT and NO MEMES OF ESCAPE. They are both illustrated by the enormously talented Rose Blake. Recently, publishing has seen a shift in covers from photographic to illustrated, and I’m as pleased as anything that my books were among the cozy mysteries to get these bright, graphic covers because they’re so eye-catching and really do capture the spirit of the books. By far, my favorite detail in the NO MEMES OF ESCAPE cover is that Odessa is standing in front of a cell phone disguised as the door to the café. It’s those kinds of details that make reading cozies so much fun – you might overlook some clue at first but once it’s pointed out, it’s glaringly obvious.

Asking me to pick a favorite or most anticipated book is a little like asking me to tell you which of my cells is my favorite. I’ve gotten to read some absolutely amazing ARCs (Advance Reader Copies) of books coming out this year in a wide range of genres by some incredibly talented authors. I feel like I’m constantly shouting on Social Media – “Go buy this book you’re gonna love it!” – because it’s true. So rather than try to pick one, or even twenty, I can honestly say that the book I’m most looking forward to is the next one. However, if I absolutely had to pick a single book I cannot wait to read, it would be MIDNIGHT HOUR: A chilling anthology of crime fiction from 20 authors of color (November 9, 2021) edited by Abby L. Vandiver.

This is another question that’s hard to answer because I’ve had the chance to read some amazing books lately, so many that it’s hard to keep track of them all. I get really shouty about books I love on Twitter (@OliviaBlacke), but I would have a hard time narrowing down the top ten best books I’ve read in any given year, much less naming a single favorite.

This is a tricky. I do have some very exciting news, but I can’t share it just yet. As soon as I can, I’ll make an announcement on my website (OliviaBlacke.com), Twitter (@OliviaBlacke), Instagram (@OliviaBlackeAuthor), and Facebook (AuthorOliviaBlacke). Additionally, newsletter subscribers (http://oliviablacke.com/newsletter/) get early or first access to big news, upcoming events and sweepstakes, and other content such as free short stories or giveaways.

I love cozies. I love where they’ve come from, and I especially love where they’re heading. Cozies are getting more diverse – from the setting to the characters. Cozies are tackling social and political issues that used to be forbidden. And most notably, cozies are getting younger. The main character doesn’t have to be a nosy octogenarian. For example, check out Mia P. Manansala’s Lila, Jennifer J. Chow’s Mimi Lee, or Abby Collette’s Bronwyn, or look no further than my own Odessa Dean. These are all younger sleuths that are more likely to listen to true crime podcasts than to have ever seen Murder, She Wrote or Matlock. This new generation of younger, more inclusive cozies is attracting new readers to the genre. I’ve lost count of how many readers have told me that they had never read a cozy before and now they’re hooked. Plus I look at some of the books that are coming out and they are fresh and exciting.

Odessa Dean is an absolute pleasure to write. I love how she can work a long shift at the diner and still find the energy to be kind to a stranger after work. Best of all, she sees Brooklyn - and her friends - through rose-colored glasses which transforms a gritty NYC into an adventure. There’s one part where she’s apartment hunting and, without giving too much away, she comes across a gruesome scene. So much of this story is based on my real-life experiences and this particular scene is no exception. Writing it was a challenge because Izzy, the jaded New Yorker, takes it all in stride and Odessa, the eternal optimist, finally gets a huge dose of big city reality right in her face and she’s about five seconds away from jumping on the next Greyhound bus back to Louisiana. I probably re-wrote that scene a hundred times until it finally tipped from gruesome to funny, but I’m afraid I might have scarred Odessa a bit in the process.

Todd Morris is the character I love to hate. He’s the inept manager at Untapped Books & Café, and it would have been easy to make him into a caricature, but he’s an actual human being. Well, fictional, but you get the point. He comes across as intentionally trying to make his staff’s lives harder by doing things like writing the schedule on a piece of paper in the hall instead of posting it to a shared calendar, but he only does that because he’s inept with technology. He likes to bark orders at the employees and will always take the last cookie from the breakroom, but he’s also willing to close the café so everyone can go to a party together. Finding a balance with Todd is always a challenge because he’s a jerk, but in his head, he’s everyone’s best friend

No Memes of Escape

Author Chat with De Nichols (Art of Protest: Creating, Discovering, and Activating Art For Your Revolution! ~ (US Only)

Author Chat with Susan Marshall (Double Negative), Plus Giveaway! ~ (US Only)

Author Chat with David Levithan & Jennifer Niven (Take Me With You When You Go)!