Author Chat with Noelle Stevenson (The Fire Never Goes Out), Plus Giveaway! ~ (US Only) Today we're excited to chat with Noelle Stevenson author of

The Fire Never Goes Out.

Read on for more about Noelle and her book, plus an giveaway. 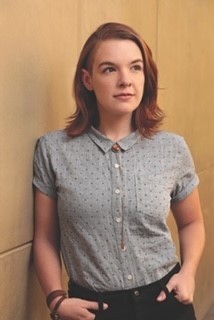 Noelle Stevenson is the award-winning, bestselling author and illustrator of Nimona and a cowriter of Lumberjanes. She currently lives in Los Angeles, where she is a showrunner for the Netflix series She-Ra and the Princesses of Power.

Meet The Fire Never Goes Out! 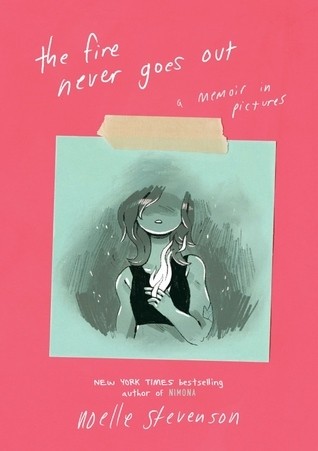 From Noelle Stevenson, the New York Times bestselling author-illustrator of Nimona, comes a captivating, honest illustrated memoir that finds her turning an important corner in her creative journey—and inviting readers along for the ride.

In a collection of essays and personal mini-comics that span eight years of her young adult life, author-illustrator Noelle Stevenson charts the highs and lows of being a creative human in the world. Whether it’s hearing the wrong name called at her art school graduation ceremony or becoming a National Book Award finalist for her debut graphic novel, Nimona, Noelle captures the little and big moments that make up a real life, with a wit, wisdom, and vulnerability that are all her own.
Amazon * B & N * Indiebound

I started drawing this book as individual comics back in 2011. At the time, I was really struggling with expressing my feelings in a constructive way, and the less that I felt other people understood me, the more frustrated I got. Drawing comics helped with that. There was something about the combination of words and pictures that let me speak more clearly than either on their own. And for the first time, I felt that people actually understood me. I never expected them to become a book, but here we are almost ten years later!

The comics themselves came first, but I used the imagery of fire so much throughout the book that I felt it had to be a part of the title. The title ended up being pulled from a comic I made in 2016!

I think I'm most proud of the comic "Holy Ghost," about the first time I walked out of church and went up on a hill at night and looked for God and didn't find him. It is very difficult to describe the conflicted feelings of grief, fear, and oddly betrayal, when parting with a value system that you've spent your whole life inside of, but I tried my best. I think it's the rawest comic I've ever made - it was all stream of consciousness, just trying to get it down. That was where I first started using second person in my comics, I think. It really changed the way I viewed comics.

When I started drawing comics about my life and making year-in-review posts, I put all my self-worth in my ambition, career, and what I could accomplish. I wasn't being honest about what I was really feeling. I wanted to show how high I could climb, but that left me feeling lonely and vulnerable, and overwhelmed with fear about crashing and burning. I've learned to be kinder to myself since then, and to surround myself with people who are also kind to me, and to focus on being kind back. Ambition can be shared, and the top of the mountain is more rewarding when you're not there alone.

Some of my favorite comics I've done are scribbled on Post-It notes, so I love that we got to capture that for the book. It makes it feel personal and tactile.

When I Arrived At The Castle by Emily Carroll took my breath away. Also loved Witchy by Ariel Slamet Ries!

Lots of things are in the works, but nothing is announced yet! Stay tuned!

I knew I wanted to tackle the story of the rocky road to first getting together with my now-wife Molly. Telling a story about a romantic relationship can be difficult, because it feels so intense and so important, and it can be tricky to figure out how to bring the reader in on those deeply personal feelings. At the time, every song on the radio felt like the soundtrack of a love story that I was living, and every little thing felt like it was laden with meaning - a cactus, a toothbrush, a rubber band shaped like a star. Capturing those feelings wasn't easy, but I'm happy with how it came out!

I think it's that imposter syndrome is actually kind of fun for me. I feel like a spy at a fancy party I wasn't invited to, and I'm just thinking, well, I might as well get the most out of this while I can before they wise up and kick me out! Imposter syndrome stops so many people, especially women, from going for jobs that they're worried they're not ready for, but I think the truth is that everyone is or has been an imposter at some point, so walk into that fancy party like you belong there even if you feel like you don't.

Trans Lifeline and The Trevor Project are doing great and much-needed work in the at-risk LGBT+ community. We've come a long way, but there's a long way still to go - if you have the means, consider donating!

The Fire Never Goes Out

The book sounds very interesting! Looking forward to reading it!

I love the idea of a memoir told through both word and image. The cover is very intriguing, with the idea of holding fire.

0
I love the idea of a memoir told through both word and image. The cover is very intriguing, with the idea of holding fire.
Cancel Update Comment

I'm a big fan of everything Noelle Steveson has created so far, so I'm super excited to read her next book!

0
I'm a big fan of everything Noelle Steveson has created so far, so I'm super excited to read her next book!
Cancel Update Comment

The cover is cute. The synopsis tells me I will enjoy this book, especially the format.

0
The cover is cute. The synopsis tells me I will enjoy this book, especially the format.
Cancel Update Comment

The cover is fun and bright. I would love to learn more about how Noelle Stevenson sees the world.

0
The cover is fun and bright. I would love to learn more about how Noelle Stevenson sees the world.
Cancel Update Comment
How to resolve AdBlock issue?
X