Read on for more info about Merrill and an interview! 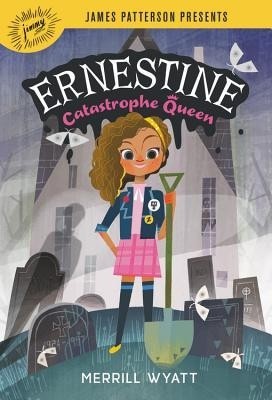 We all know and love Ramona, Matilda, and Harriet the Spy. Now meet Ernestine.

Ernestine is the kind of kid who gets things done. Smart, clever, and armed with a take-charge personality, she's easily the most responsible member of her family. Her most important task? Helping her absent-minded parents with their job of looking after the kooky residents of the MacGillicuddie House For Elderly and Retired Artists, Both Performing and Otherwise.

But there's bigger trouble than leaky pipes brewing inside the walls of the rambling old mansion...and it's Ernestine who uncovers the clues that point in one direction--murder! From the mysterious figure climbing in through the basement window to the suspicious evidence found by the koi pond, there's a dangerous mystery lurking and only one person who can solve it--Ernestine, catastrophe queen!

With a colorful cast of characters, an unforgettable diverse heroine, Ernestine shows that sometimes relying on yourself isn't as much fun as relying on others.

Merrill Wyatt lives in Toledo, Ohio, with her husband, daughter, three cats, and a hamster who might possibly be an immortal magician. She spent far too much of her childhood wandering around cemeteries and old Victorian homes. A middle-school technology teacher, she is dollphobic, donut-obsessed, and owns too many pairs of shoes.

What made Ernestine's character fun to write?

Both her confidence and her demented sense of optimism. She's an extremely intelligent, extremely capable kid with a... uh, unique way of looking at the world. I love that she always finds some twisted bright side to the worst situations.

Is there a particular place/setting that gave you inspiration for Ernestine, Catastrophe Queen?

I teach middle school, and I have definitely been inspired over the years by all of the smart, confident girls that I've taught. They're incredibly different from how I was in middle school! As for the setting, it's very much inspire by Toledo's Old West End with its gorgeous, crumbling mansions and vibrant community of artists.

What books can be found in Ernestine's to-be-read pile?

Ernestine is a kid with diverse interests. I am quite sure that you would find both The Last Kids on Earth by Max Brallier and Machiavelli's The Prince on her bedside table. Along with Eleanor Roosevelt's autobiography and – hidden right at the bottom – My Big, Fat Zombie Goldfish by Mo O'Hara.

If Ernestine had a chance to explore more mysterious places, where would she go?

Ernestine would go anywhere and everywhere. For all that she's obsessed with the undead, Ernestine has a huge appetite for life so I think she'd happily go anywhere and everywhere. However, if she got to pick just one place, I think she'd start with The White House so she could figure out what on earth is going on there. After all, her long-term goal is to become president of the post-apocalyptical world. (Why stop at just being president of the U.S?)

If you were suddenly drawn into your book and got to tag along with Ernestine, what would you do to help?

Honestly, I don't think Ernestine needs my help. Whether confronting would-be murderers or possible zombies, she's got most situations under control. And when she doesn't – well, she's got a great family and group of elderly friends to rely on. If anyone needs my help, I think it's probably Eduardo, Mrs. MacGillicuddie's butler. He's in charge of both planning all of her extravagant parties and cleaning up the mess afterwards. He could definitely use a hand.

What scene from Ernestine, Catastrophe Queen are you most excited for readers to experience?

Oh, there are so many to pick from. However, if I have to choose, I think it might be the funeral for a certain character who does not make it to the end of the book. There are accusations! Counter-accusations! A brawl that ends up with several people in the koi pond! An arrest! Several assaults! The SWAT team has to be called in! If you have to be murdered, you might as well have a funeral that makes the six o'clock news.

Which side character from Ernestine, Catastrophe Queen would you love to sit down and interview?

Without a doubt, Mrs. MacGillicuddie. She's eighty, glamorous, and she does not care what you think. She's a woman living her best life, and I wouldn't mind a few pointers.

Interview with Lisa M. Basso, Author of A Shimmer of Angels