Author Chat with Megan McDonald (Stink: The Stupendously Super-Sonic Collection), Plus Giveaway! (~US Only) Today we are chatting with Megan McDonald, author of

Read on for more about Megan, her book, and a giveaway! 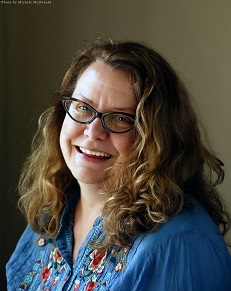 Megan McDonald is the creator of the popular and award-winning Judy Moody and Stink series for older readers. She is also the author of three Sisters Club stories, two books about Ant and Honey Bee, and many other books for children. Megan McDonald lives in California with her husband, the writer Richard Haynes.

About Stink: The Stupendously Super-Sonic Collection: 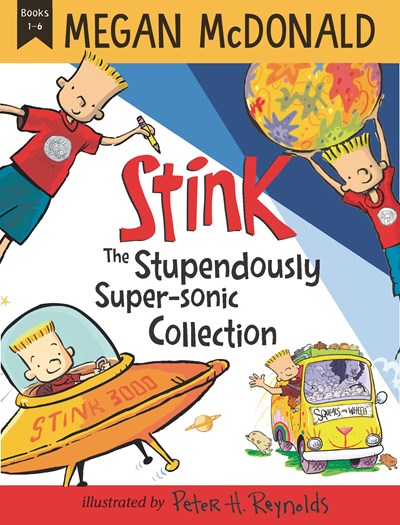 This marvelous boxed set features not just two, not just three, but SIX of Stink’s adventures—perfect as an introduction to the series or a gift for a committed fan.

Stink Moody: fact freak, science star, and encyclopedia enthusiast. He’s always up to learning more and sharing some out-of-this-world comics! Readers won’t want to miss out on this paperback boxed set of Stink’s first six books, with fresh covers sure to catch the eye.

The inspiration for STINK was Judy Moody, his big sister. Readers of the Judy Moody books especially liked the character of her younger brother, Stink, and asked for Stink to have his own book. Ta da! A new series was created starring Stink E. Moody.

Stink is my favorite character because he’s the younger sibling. I’m the youngest of five sisters, so I can relate! Stink is the shortest kid in his class, and a bit of an underdog, but he makes up for it in smarts. He is the king of scientific facts!

Stink’s real name is James, but his nickname came first, then I filled in the backstory. Stink is a shortened version of “Stinker” and Judy thinks up all kinds of variations for him, such as Stinkerbell and Stinkorama. Stink’s name came first, followed by a first novel about how he thinks he’s shrinking. For me, titles often come last, when the book is complete.

In the first book, Stink brings home a pet newt and it accidentally slips down the drain. (Based on a true story that happened to me.) When disaster strikes, Judy thinks up a clever means to calm Stink’s feeling. I like this scene because the reader goes through so many emotions along with the character. It’s funny, then there’s this “Oh no!” feeling, and then the reader gets to choose (along with Stink) what they believe may have happened to Newton.

The importance of feedback, editing, and revision.

I like the bold colors that stand out against a clean white background, and seeing Stink in many different (and funny) action poses. The stinky sneaker cover is one of my all-time favorites!

I can’t wait for the next book in the Judy Moody and Friends series. The Mystery of the Missing Mood Ring. I’m obsessed with mood rings! And mysteries! But I’m also eager for readers to learn more about Mighty Fantaskey, one of Judy Moody’s newest friends.

Being Clem, by Lesa Cline-Ransome. It’s the third book in the Finding Langston trilogy, and each one just reaches inside and yanks your heart right out. I am also really getting a kick out of Cold-Blooded Myrtle, the third in the Myrtle Hardcastle mysteries by Elizabeth C. Bunce. They are just so much fun.

Next up will be a new book in the Stink series called Stink: Superhero Superfan. Stink discovers some old retro comic books in the garage featuring a superhero called Super Gecko and it spins out from there.

Fantasy! It’s still a secret but I can’t wait to blab!

Judy and Stink’s friend Izzy Azumi gave me the most difficulty in terms of logistics. I didn’t know when I created her that she’d be a recurring character, so I had to work with certain details and specifics. But she just cartwheeled her way into my heart.

Drafting is more fun, because I start with a blank page and a ton of ideas, and it’s all ahead of me. Revising can be difficult, but so satisfying, because it always makes the book better and better.

First Book. They work tirelessly to get books into the hands of underserved kids.

Five winners will receive a complete boxed set of 6 books of the Stink: The Stupendously Super-Sonic Collection (~US only)

The covers are all so much fun and this is one of our favorite authors!

0
The covers are all so much fun and this is one of our favorite authors!
Cancel Update Comment

The covers and fun and hilarious. These books are so funny.

0
The covers and fun and hilarious. These books are so funny.
Cancel Update Comment

The book cover is fun. This sounds like a good series.