Author Chat with Maureen Johnson (The Box In The Woods), Plus Giveaway! ~ (US Only) Today we're excited to chat with Maureen Johnson author of

The Box In The Woods.

Read on for more about Maureen, her book, plus an giveaway! 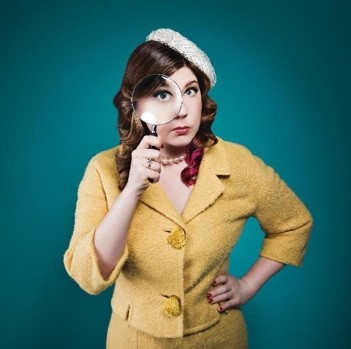 Maureen Johnson is the New York Times and USA Today bestselling author of more than a dozen young adult novels, including the Truly Devious series, the Shades of London series, Suite Scarlett, and 13 Little Blue Envelopes. Her collaborative books include Ghosts of the Shadow Market (with Cassandra Clare), as well as Let It Snow (with John Green and Lauren Myracle), which was also a hit feature film on Netflix.

Her books have sold more than three million copies worldwide and have been published in more than thirty countries.

The bestselling author is also active in social justice issues and politics both online and IRL. Recently, she initiated an open letter in support of trans and nonbinary communities that was signed by more than 2000 North American writers, including Margaret Atwood, Stephen King, Roxane Gay, and Neil Gaiman, as well as publishers and other members of the literary world. She co-hosts the podcast, Says Who? with Punk Planet creator Dan Sinker and edited the collection How I Resist, the entire advance of which was donated to the ACLU.

She has written for publications such as The New York Times, Buzzfeed, The Guardian and CrimeReads. Her CrimeReads essay, "Your Guide to Not Getting Murdered in a Quaint English Village" has garnered more than 427,000 views since its publication.

Maureen Johnson grew up in Philadelphia, graduated from the University of Delaware and has an MFA in Writing from Columbia University.  She lives in New York City with her husband and dog.

Meet The Box In The Woods! 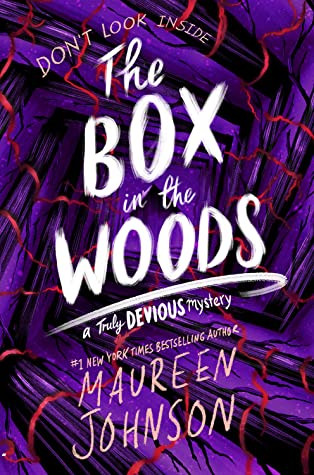 After solving the case of Truly Devious, Stevie Bell investigates her first mystery outside of Ellingham Academy in this spine-chilling and hilarious stand-alone mystery from New York Times bestselling author Maureen Johnson.

Amateur sleuth Stevie Bell needs a good murder. After catching a killer at her high school, she’s back at home for a normal (that means boring) summer.

But then she gets a message from the owner of Sunny Pines, formerly known as Camp Wonder Falls—the site of the notorious unsolved case, the Box in the Woods Murders. Back in 1978, four camp counselors were killed in the woods outside of the town of Barlow Corners, their bodies left in a gruesome display. The new owner offers Stevie an invitation: Come to the camp and help him work on a true crime podcast about the case.

Stevie agrees, as long as she can bring along her friends from Ellingham Academy. Nothing sounds better than a summer spent together, investigating old murders.

But something evil still lurks in Barlow Corners. When Stevie opens the lid on this long-dormant case, she gets much more than she bargained for. The Box in the Woods will make room for more victims. This time, Stevie may not make it out alive.

When I wrote the Truly Devious series and introduced Stevie Bell, the detective, I always intended to have her solve other cases. So this has been planned for some time. But I didn’t decide what I wanted Stevie to work on until all of Truly Devious was complete. That series ends as school lets out for the summer, so I thought about summer, and murder, and remote locations…all of that leads up to camp.

I enjoy them all, but I definitely created Nate Fisher, the reluctant novelist, for my own amusement. Nate is constantly avoiding writing—and when he is writing, he doesn’t want to talk about it to anyone, and is generally a little paranoid about how well he’s working.

The novel, but because the box in the woods is so central to the story, the title seemed to follow naturally.

I think the murder and backstory are pleasingly creepy. I worked hard to give the creeps.

This is strangely hard to answer. I had a hard time reading in 2020, so I did a lot of rereading, or reading parts of things and putting them down. My concentration wasn’t there. I think that happened to a lot of people. Luckily, right after the new year, my brain switched back on! But it’s hard to say what went on in 2020.

Stevie has trouble articulating her emotions, and she sometimes reacts in ways she doesn’t intend to. She suffers from anxiety, which I have experience with as well. I tried to explain what that’s like, while keeping her on task to solve the case. That could be tricky.

Sometimes I can’t tell the difference. I’m rewriting as I’m drafting. It’s like a smoothie. It’s all in there together.

I do a very good impression of a seagull. It fools real seagulls.

Several—anything to do with food insecurity or animals.

The Box In The Woods

Read the trilogy and was so good, im happy there will this so i can go back to this good story!

0
Read the trilogy and was so good, im happy there will this so i can go back to this good story!
Cancel Update Comment

This sounds like such a fun read and I love the cover!

I like the colors and design of the book cover. This sounds like a fun and exciting mystery.

I love the cover so much! I've been wanting to get into mystery books.

0
I love the cover so much! I've been wanting to get into mystery books.
Cancel Update Comment

The cover is eye-catching and this sounds like a page-turner.

The cover is creepy. This is not the kind of story I could pass up.

0
The cover is creepy. This is not the kind of story I could pass up.
Cancel Update Comment
How to resolve AdBlock issue?
X