Today we're spotlighting Traitors Among Us by Marsha Forchuk Skrypuch!

Read on for more about Marsha, her book, and giveaway! Marsha Forchuk Skrypuch is a Ukrainian Canadian author acclaimed for her nonfiction and historical fiction, including Making Bombs for Hitler, The War Below, Stolen Child, and Don't Tell the Enemy. Marsha lives in Brantford, Ontario, and you can visit her online at www.calla.com.

Meet Traitors Among Us! 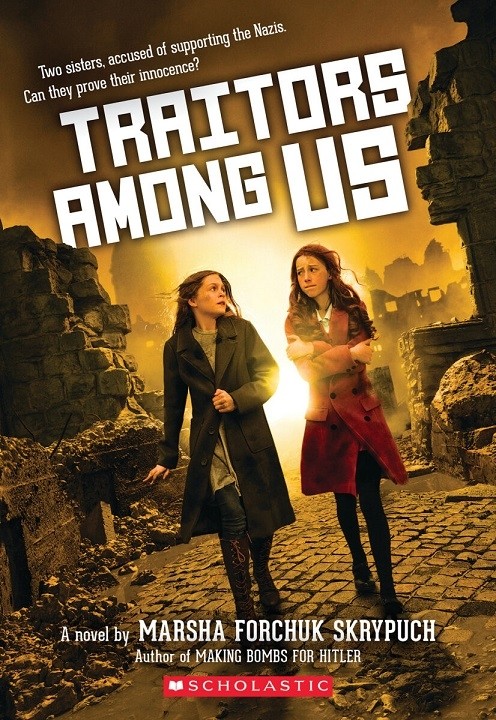 World War II may be over. But two sisters are far from safe.

Inspired by true events, this is the latest gripping and powerful novel from the acclaimed author of Making Bombs for Hitler.

Sisters Krystia and Maria have been through the worst -- or so they think. World War II ravaged their native Ukraine, but they both survived, and are now reunited in a displaced persons camp.

Then another girl accuses the sisters of being Hitler Girls -- people who collaborated with the Nazis. Nothing could be further from the truth; during the horrors of the war, both sisters resisted the Nazis and everything they stood for. But the Soviets, who are now in charge, don't listen to the sisters' protests. Krystia and Maria are taken away and interrogated for crimes they never committed.

Caught in a dangerous trap, the sisters must look to each other for strength and perseverance. Can they convince their captors that they're innocent -- or escape to safety before it's too late?

Traitors Among Us is a tribute to those millions who survived Hitler’s frying pan only to end up in Stalin’s fire. On a more personal note, my great-aunt and great-grandmother were victims of the Soviets after WWII.

Sophie, because she is so despicable. I had no idea she was even going to be in this book, but she walked through the door of the barrack in the American refugee camp where my beloved sisters Krystia and Maria thought they’d finally be safe and she created havoc. Despicable characters pretty much write themselves.

Don’t expect polished scenes to effortlessly slip off your fingertips and onto the page. Let yourself write crap because it’s easier to fix crap than to stare at a blank page.

My Long List of Impossible Things by Michelle Barker (Annick Press) is an absorbing novel set in a similar time and place as Traitors Among Us but is from the perspective of Katja, a German girl. During the war she lived in blissful prosperous ignorance but that bubble bursts with the arrival of the Soviets. It’s a great read.

I’m currently working on a novel that takes place in the years before the war.

There is a scene when Maria and Krystia say horrible things to each other. It was a brutal scene that cut to the quick and I wept as I wrote it. Being a sister myself, I can tell you that we hurt the ones we love the most.

This novel is the third in a trilogy that begins with Don’t Tell the Nazis, from Krystia’s perspective, then Trapped in Hitler’s Web, from Maria’s perspective. Traitors Among Us alternates chapters between the two sisters and I was so fresh off writing in Maria’s voice that I had trouble at first reclaiming Krystia’s. I ended up going right back to the beginning and rewriting every single piece of her dialogue.

YABC:  Which part of the writing process do you enjoy more: Drafting or revising?

Doing the initial draft all the way through to THE END drives me nuts. But once I get the whole thing down, it’s a joy to jig and re-jig, to cut and shape. I cherish editorial feedback and appreciate the opportunity to make my novel the best that it can be. Drafting feels like climbing up a mountain. Revising is like sledding down the hill.

I have the gift of dyslexia, which means that my memory is image-based and I think it makes my writing image-based. I have so many kids write to me and tell me that they see my books like movies in their head. Dyslexia also gives me the ability to write out of order, so some books I’ll start near the end and write towards the beginning. It also means I can write three novels that are linked but are also self-contained.

If you want to be a writer, you should do two key things:

1.  Starting now, write for ten minutes every single day. It doesn’t matter what you’re writing but it’s best if you give yourself complete freedom with it and you keep it private. If you do this, your brain will transform itself into a writer’s brain.

2.  Give yourself a goal of reading 1000 books. Why? Because if you only read a few books and then start writing, you’ll end up sounding like the last person you read. Read as many different kinds of books as you can. That will open your mind and will show you all different kinds of writing techniques. It will fill your toolbox and help you develop your own unique writing voice.

The cover is perfect for this intriguing novel.

0
The cover is perfect for this intriguing novel.
Cancel Update Comment

The cover is dramatic and the story sounds compelling.

0
The cover is dramatic and the story sounds compelling.
Cancel Update Comment

My students love this author's books!