Author Chat with Marie E. Andreu (Love In English), Plus Giveaway! ~ (US Only) Read on for more about Marie and her book, plus a giveaway!

Maria E. Andreu is a writer and author of the forthcoming Love in English (Balzer + Bray, 2021) as well as an as-yet untitled book (B+B, 2022) . Her work has appeared in Newsweek, The Washington Post, NJ.com [nj.com], and the Newark Star Ledger. Her debut young adult novel, The Secret Side of Empty is a Junior Library Guild Selection, a National Indie Excellence Book Award winner, an International Latino Book Awards Finalist and has been called “captivating” by School Library Journal. Maria is Latinx and Argentinian-American and currently lives in New Jersey with her two children.

Maria’s interest in the immigration rights movement stems from her own childhood and adolescence experiences with being undocumented in the United States.  She obtained her U.S. citizenship thanks to the Immigration Reform and Control Act of 1986. 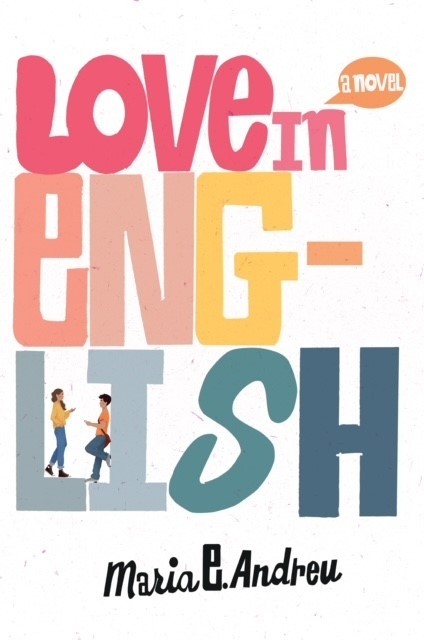 Sixteen-year-old Ana is a poet and a lover of language. Except that since she moved to New Jersey from Argentina, she can barely find the words to express how she feels.

At first Ana just wants to return home. Then she meets Harrison, the very cute, very American boy in her math class, and discovers the universal language of racing hearts. But when she begins spending time with Neo, the Greek Cypriot boy from ESL, Ana wonders how figuring out what her heart wants can be even more confusing than the grammar they’re both trying to master. After all, the rules of English may be confounding, but there are no rules when it comes to love.

With playful and poetic breakouts exploring the idiosyncrasies of the English language, Love in English is witty and effervescent, while telling a beautifully observed story about what it means to become “American.”

The novel had a different working title as I was writing and revising. It was simply called English. But then we were worried that maybe it didn't say enough about the story. Or maybe someone would confuse it with a grammar handbook! So its two driving forces made Love in English the right title for this story, since it's a love story and also a love letter to everything that's wonderful about language.

I'm a little embarrassed to admit I have had to find my way to appreciating revision. So many of my favorite authors say they love revision and that's when the good work is done, and they're not wrong. But I love drafting. I do it quickly and it comes easily to me. Editing... not so much. So the most important thing I've learned is the value of revision.

I love absolutely everything about the cover! The team that created it far exceeded my expectations. The colors! The figures. It's all a dream. There's this fun surprise on the spine of the hardcover, too, under the dust jacket. The title on the spine is in shiny pink foil. It's like they read my secret thoughts and knew that if it's pink and shiny, I love it. Then they put my name and book title in it. I'd never mentioned that to anyone but there it is.

There is so much yumminess coming out this spring, and I've been lucky to nab a few advance review copies. Hot British Boyfriend, Kisses and Croissants and Tokyo Ever After are the ones I'm most excited about. But that's just scratching the surface!

I'm working on the follow-up to Love in English and I am having a blast! It's a stand-alone book with all new characters I can't wait for readers to meet. After that, there's a fantasy I've got drafted which is kind of the book of my heart and which I hope to get out in the world soon.

The audiobook was recorded by a super-talented actor and that's out now. As for the rest... all I can say right now is stay tuned!

The scenes in which the main character doesn't understand the English around her or when she feels embarrassed because she messed up a word... those are based on experiences that I had as a non-native English speaker. I had to draw deep into memories of how that felt. At times that was emotional. But I was happy to be able to help readers see into that what that feels like.

Having been an immigrant to the U.S. myself, I tend to focus on the issues of immigrants and refugees for my donations and volunteer work. I'm a firm believer that we need to honor everyone's inherent worth and not get caught up in things like where they were born or what their social status is. There is so much work still left to be done on that front. Of course, there is so much work to do on social justice issues in general. I spend a lot of my energy on that.

Finding your way to a writing profession can be a long and winding road. Or at least it was for me! There was so much for me to learn. If I had to pick one thing that sums it up, I'd say: keep going. Write something else while you're waiting to hear back from your critique partners. Send out another query when one gets rejected. Take a class to strengthen an area you're unsure about. Keep going. >From what I've seen, this business belongs to the ones who don't give up. It's not mythical talent or knowing the right people... it's just always looking for the next step and never giving up.

Five winners will each receive a copy of Love In English (Marie E. Andreu) ~ (US Only)

This one sounds super cute. Love the cover.

Cover looks good and the synopsis sounds like a delightful read.

This is awesome! Thanks for the opportunity!!!!! plus the book looks awesome!

0
This is awesome! Thanks for the opportunity!!!!! plus the book looks awesome!
Cancel Update Comment

The cover is creative. This book will be a joy to read.

0
The cover is creative. This book will be a joy to read.
Cancel Update Comment

The cover is fun and the story sounds relevant.

0
The cover is fun and the story sounds relevant.
Cancel Update Comment

This sounds really good, with a lot of misunderstandings coming up.

0
This sounds really good, with a lot of misunderstandings coming up.
Cancel Update Comment
How to resolve AdBlock issue?
X