Author Chat with Maggie Tokuda-Hall (Squad), Plus Giveaway! ~ (US Only) Today we are chatting with Maggie Tokuda-Hall, author of

Read on for more about Maggie, her book, and a giveaway! Maggie Tokuda-Hall is the author of the Parent’s Choice Gold Medal-winning Also an Octopus and the young adult novel The Mermaid, the Witch, and the Sea. She received her BA in Studio Art from Scripps College, an MFA in Writing from University of San Francisco, and has worked both for independent bookstores and for Apple Books. She is the host of several popular podcasts and lives in San Francisco with her husband, son, and objectively perfect dog. 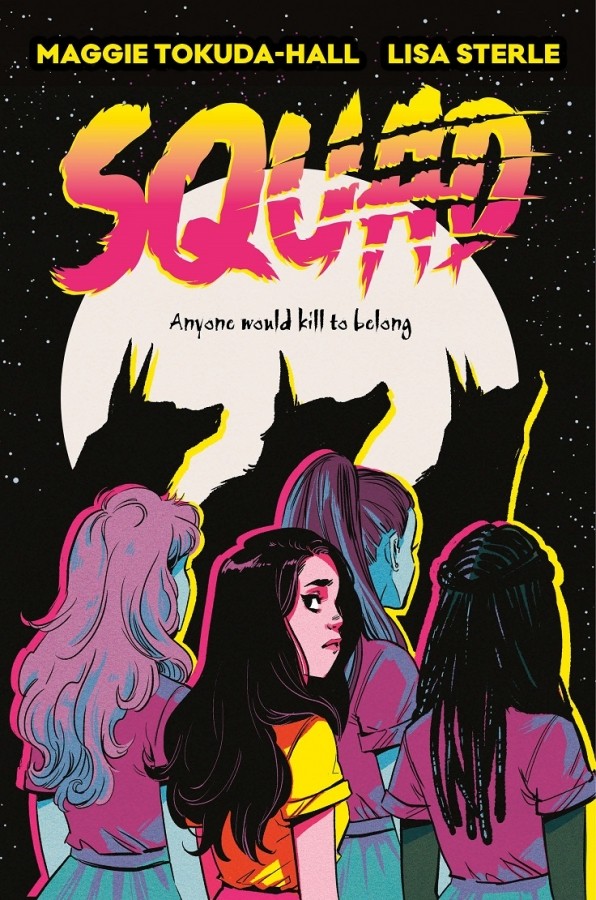 Being a girl. Being a girl in high school. Being a girl in high school in an affluent, white town where rape culture was rampant and accepted. Being furious for decades about it. For years, I always knew I wanted to write something about what I saw and experienced, but I could never quite find the right road in-- until I realized werewolves would be a really fun route. As soon as I put that together, I wrote the first draft of Squad done in a week.

Amanda. Amanda, by all rights, should be the alpha. She's smart and competent and willing to follow the ethics they've all agreed upon. She is, arguably, the only girl in the squad with a conscience. I'd love to write another story starring her someday, following her to Stanford. She's a person of a lot of consequence in this world, and I'd love to spend more time with her.

The scene where Becca agrees to join the squad, but specifically the moment when Arianna is eating Bart O'Kavanaugh, and Amanda says: You don't have to watch. And Marley says: But it's more fun if you do. I cackled to myself while I was writing that. It was the exact tone I wanted the entire book to follow.

The only difference between amateur writers and professionals isn't talent. It's that professionals finish. There are a lot of factors outside of the writer's control that can affect that, but that is the only binary that matters if you want to make writing your career. That being said, I also think writing is a great hobby and not all our passions should have to justify themselves through capitalism in order to be valid.

Becca's facial expression. She has the perfect mix of fear and excitement and ambivalence.

I have read some pretty stellar books this year, so there's no way I can narrow it down to one. But some favorites include: The Good House by Tananarive Due, which is a horror novel about parents and kids and inheritance and debts, The Book of Accidents by Chuck Wendig, which is also a horror novel about trauma and abusive parents, Hench by Natalie Zina Walchotts, which is about the collateral damage superheroes leave behind and also some pretty sexy super villains, How the Word is Passed by Clint Smith, which is nonfiction about the way Americans teach ourselves about slavery (or, more chillingly, don't), Fledgeling by Octavia Butler, which is a vampire novel unlike any other vampire novel you'll ever read, Klara and the Sun by Kazuo Ishiguro, who's work is always transcendent, the Heartstopper series by Alice Oseman, YA graphic novels that I'm pretty sure cured my depression about two very sweet young men in love, The Other Merlin by Robyn Schneider, which is a rollicking YA retelling of the King Arthur legends that was hilarious and adorable, and lastly, One Last Stop by Casey McQuistan, a swoony, sexy romance novel.

I think for me, the scene when Thatcher corners Becca was really hard. I wanted to walk the line of honoring my own experiences and the experiences of so many people while not re-traumatizing anyone or fetishizing the sexual violence. This isn't a titillating scene; I want the reader to feel menace, but I also want the reader to be safe at least while they're in the pages of the story Lisa and I have created for them. It's a hard line to walk, and one that I thought about a lot while I was working on Squad.

When writing Squad, I think Becca was the hardest. Main characters usually are for me. They have to bear so much weight. Becca has the added complication of sharing so much with myself and some of the women in my life that I'm closest to, and so sometimes I'd get feedback that she seemed inscrutable when to me she seemed perfectly obvious. Side characters are always more fun to write in my opinion. They're like little breaks you get to take while working on something. And now for something completely different! They can be invigorating that way.

I tend to go local with my organizations and I'm in Oakland, California. But some of my favorites here are Students Rising Above, which supports kids who've overcome boggling obstacles to go to college, the Sogorea Te Land Trust, which is an urban, indigenous women-led group working to return land back to indigenous stewardship, Defund Oakland PD, The Antipolice Terror Project, and Mental Health First Oakland, which are all organizations working toward police and prison abolition. I also like the Oakland Zoo.