with an author chat by Lilliam Rivera, author of Unearthed: A Jessica Cruz Story!

Read on for more about Lilliam and her book! 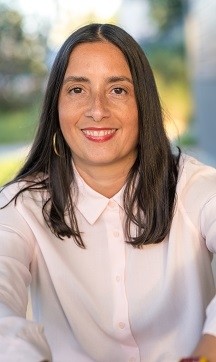 Lilliam Rivera is an award-winning author of the young adult novels Never Look Back, a Pura Belpré Honor winner, Dealing In Dreams, The Education of Margot Sanchez, as well as the Goldie Vance series for middle grade readers, and the stand-alone middle grade novel Barely Floating. Her forthcoming works include a young adult science fiction novel, We Light Up the Sky, for Bloomsbury (Oct 5, 2021) and a graphic novel for DC Comics, Unearthed: A Jessica Cruz Story (September 14, 2021). Her work has appeared in The Washington Post, the New York Times, and Elle, to name a few. Lilliam lives in Los Angeles. 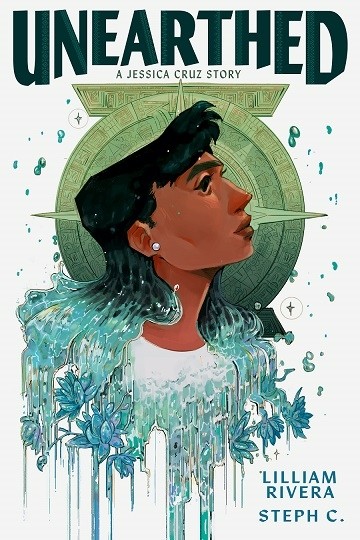 Jessica Cruz has done everything right. She's a dedicated student, popular among her classmates, and has a loving family that has done everything they can to give her a better life in the United States. While Jessica is a part of the Deferred Action for Childhood Arrivals program, allowing her to go to school and live in the U.S., her parents are undocumented. Jessica usually worries for her parents, but her fears and anxiety escalate as a mayoral candidate with a strong anti-immigration stance runs for office.

As the xenophobia in Coast City increases, Jessica begins to debate whether it's worth renewing her status to stay in the U.S., or if her family would be safer and better off moving back to Mexico. And despite her attempts to lean on her friends and family, she finds herself constantly visited by visions of Aztec gods, one pulling her towards hope and the other towards anger.

But when her father is detained by I.C.E., Jessica finds herself being pulled into an abyss of fear. With her father gone and feeling helpless, Jessica must find her way out of her fears and ultimately become a voice for her community.

Jessica Cruz is such a powerful comic book hero from the Green Lantern universe and she’s one of a few Latina superheroes in DC’s comics. I wanted to write about her origin story, to play a role in explaining where she came from, and what might have molded her future.

I would be remiss to not say Jessica because she is a typical teenager who wants to make her parents proud, who wants to excel, but who also carries heavy anxieties and burdens. She wants to protect her undocumented family and to keep that a secret is hard for any young person to deal with.

I usually come up with titles before I start a novel, so Unearthed was my idea but titles are never set in stone so it was a surprise that they kept the original title!

I am in love with the artwork created by Steph C. The sequences where Jessica meets the gods are illustrated so vividly and beautifully. I am in total awe of her talent.

That my stories matter, no matter what. Rejection is part of life as an artist but my self-worth and my value is not.

There are so many amazing elements being shown on this cover but the main one is having this beautiful, brown young woman taking center stage on a DC book. It’s powerful.

I am looking forward to reading Brandy Colbert’s nonfiction book, Black Birds in the Sky: The Story and Legacy of the 1921 Tulsa Race Massacre. An important book that digs into the history and ramifications of actions that we should all be aware of.

I spent a lot of time reading horror books in 2020 and my favorite was Stephen Graham Jones’ The Only Good Indians. Definitely not a kids book but so well done and scary.

I have a young adult science fiction novel We Light Up the Sky coming out on October 5, 2021 by Bloomsbury. It’s an alien invasion story set in Los Angeles centering three young brown kids. I’m really excited!

The most difficult scenes to write were the scenes centering around Jessica’s father. I don’t want to spoil what happens but trying to embody a character’s worst fears coming true was difficult. I wanted to be honest and gentle with those scenes.

The hardest character to write would be Fernanda Villamontes, who is a politician running for mayor of Coast City on an anti-immigrant platform. It would be so easy to write her off as an ignorant person but villains always believe they are on the right side of the truth.

I like drafting because it’s when you can play freely on the page. Revising using a different part of your brain and it’s way more strategic. I’ll revise but I’m never happy!

My superpower is knowing my worth. Like Jessica Cruz, I wasn’t born with that knowledge. It was a slow build but now there’s no stopping me.

I love the work being done by the TransLatin@ Coalition who organize and advocate the needs of undocumented Trans Latin@s living in the United States.