Read on for more about Laurel and her book, plus a giveaway!

Laurel Flores Fantauzzo is the author of MY HEART UNDERWATER (Quill Tree Books, HarperCollins, 2020) and THE FIRST IMPULSE (Anvil, 2017). Her essays have appeared in CNN Philippines, the New York Times, World Literature Today, and elsewhere.

She has been named a Philippine National Book Award finalist, a PEN/FUSION Emerging Writers Prize finalist, and the recipient of a Carlos Palanca Memorial Award. She was a Fulbright journalism fellow, a Hedgebrook resident, a grantee of the Astraea Lesbian Foundation for Justice, and an arts fellow at the University of Iowa Nonfiction Writing Program.

She has taught writing and literature at the University of Hawaiʻi at Mānoa, Yale-NUS College in Singapore, and Ateneo de Manila University.

She currently lives with her wife between Honolulu and Metro Manila. 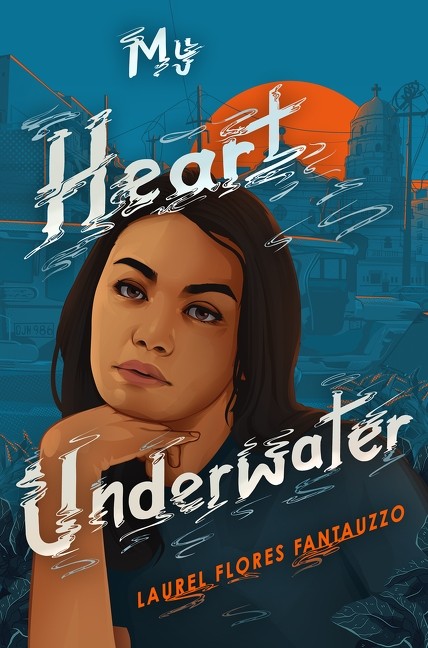 After Corazon's mother catches her kissing her older female teacher, Corazon is sent to the Philippines to live with a half brother she barely knows. There she learns more about loss and love than she could have ever imagined.

Corazon Tagubio is an outcast at her Catholic school. She’s attending on scholarship, she keeps to herself, and her crush on her teacher Ms. Holden doesn’t help anything. At home, Cory’s less-than-perfect grades disappoint her mom and dad, who are already working overtime to support her distant half brother in the Philippines.

When an accident leaves her dad comatose, Cory feels like Ms. Holden is the only person who really sees her. But when a crush turns into something more and the secret gets out, Cory is sent to her half brother. She’s not prepared to face a stranger in an unfamiliar place, but she begins to discover how the country that shaped her past might also change her future.

This #ownvoices story takes readers on a journey across the world as Cory comes to understand her family, her relationships, and, ultimately, herself.

Cory’s voice wouldn’t stop bothering me; her anxiety in her surroundings, her growing loneliness, her tremendous, burgeoning capacity for affection, and her growing knowledge of emotions and attractions she couldn’t control. The voice simply would not leave me alone; it was my responsibility for follow Cory’s destiny, and to discern who she was and what she would journey through.

I admit that Junior—Cory’s sulking, smart-ass, grumpy, but ultimately creative, generous, older brother—was my favorite person to meet in the novel. He’s tough and angry and vulnerable, having dealt with a lifetime of economic and emotional abandonment. But he chooses more often than not to be kind in unfair circumstances, even though he makes many mistakes.

I am usually too absorbed and fretful, while writing, to snack! I prefer to drink oolong tea!

No matter what level of professionalism you achieve, you will always be dissatisfied with your writing. So don’t go only with your own hard-on-yourself perspective. Trust the encouragement of other, wise readers when they tell you a piece is ready to go.

I Was Their American Dream, by Malaka Gharib, is exuberant, playful, and nuanced in its synthesis of growing up in an Egyptian Philippine American family in Cerritos and Cairo.

Another YA novel! The characters are bothering me now, telling me who they are, as I try to get other tasks done.

There is, happily, an audiobook narrated by a Philippine American actress!

Jun faces a moment of family betrayal in the book, and for a few days he turns on Ate Nene, the domestic worker who raised him in the absence of his parents, who worked abroad for most of his life. Until that moment in the book, it’s clear that Jun respects Ate Nene as a parental figure, as underappreciated, underpaid domestic workers often are to the young children they raise into adults. It was emotional for Jun to make that mistake. But I thought it felt true to show how even the most well-meaning, sympathetic individuals can participate in injurious behaviors of class inequality.

It made me cringe, and grit my teeth, to write Ms. Holden’s damaging choices. The white American teacher in the book grows so profoundly selfish in her behavior, betraying her responsibility as a teacher and mentor. It took me fully three years to write the damaging, manipulative decisions she ultimately makes. I think I was afraid of Ms. Holden—afraid of how seemingly charismatic, caring and generous individuals reveal their cruelty.

For many years I’ve admired the work of Roots of Health, a nonprofit in the Philippines that educates and empowers young people on nurturing healthy relationships, sex education, and reproductive health. I continue to hope its practices will be replicated on a national and worldwide level.

Such a beautiful cover! Can’t wait to read!

It looks really interesting and I like the cover!

we need more stories like this. brown girl on cover, yes. social justice + LGBTQ+, yes. HERE FOR THIS

The cover is eye catching and the story sounds original and thought provoking.

0
The cover is eye catching and the story sounds original and thought provoking.
Cancel Update Comment

I like the cover. This book sounds emotional and speaks of today.

This book has been on my TBR for a while. It sounds so good

0
This book has been on my TBR for a while. It sounds so good
Cancel Update Comment
How to resolve AdBlock issue?
X