Today we're excited to chat with L.C. Rosen author of

Read on for more about L.C., her book, plus an giveaway! 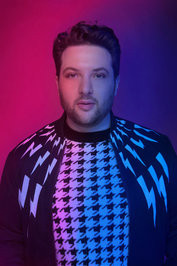 C. Rosen, also known as Lev Rosen, has written several books for adults and children, including the young adult novel Jack of Hearts (and other parts). His books have been featured on numerous Best of the Year lists and nominated for several awards. He lives in New York City with his husband and a very small cat. 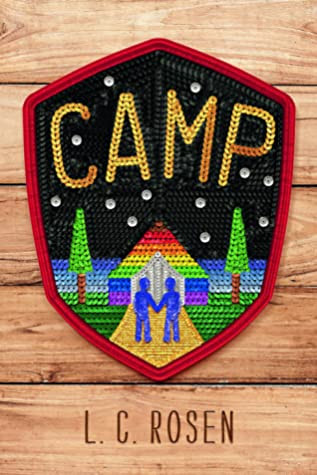 This year, however, it's going to be different. Randy has reinvented himself as 'Del'—buff, masculine, and on the market. Even if it means giving up show tunes, nail polish, and his unicorn bedsheets, he's determined to get Hudson to fall for him.

But as he and Hudson grow closer, Randy has to ask himself: How much is he willing to change for love? And is it really love anyway, if Hudson doesn't know who he truly is?

The inspiration was to do a modern queer version of those old 'battle of the sexes' screwball sex comedies starring Rock Hudson and Doris Day. I really love that particular historical genre, and I always think it's so unfair that queer folks never got to tell stories in certain genres at the time, so I'm trying to pull it forward and queer it up.

I love all my characters, but as an adult, the one I most relate to is probably Mark. I, too, would be exhausted by these teenagers' antics, while loving them all the while. Which is funny because of course, those antics are 100% things I would have done as a teen. So I guess I related to all of them, just from different times in my life.

The novel! Originally it was called "Masc4Mask" but my publisher felt that the term "Masc4Masc", a fairly common term in the queer community, was too niche and might alienate straight readers - and they're so often neglected, so it's a good thing someone was looking out for them.

I love the obstacle course scene with the two cabins competing. It gets into spoiler territory, but setting it up, translating theater skills into essentially gymnastics and track and field skills, the music, the costumes. That was a lot of planning and I think it paid off. I had to design an entire obstacle course around knowing what my theater kids would be good at from theater, while also making sure it felt like a normal obstacle course. So I'm glad that paid off. I also love the butch fashion show - that always makes me laugh - and the scene at the end where they take off the nail polish, which is sad, but I think really important.

I love this cover SO much. It was my idea to do a patch - I know it's not like Boy Scouts or anything, but for some reason a patch says summer camp to me? I originally suggested a glitter patch, and when they said "we're going to do sequins" I was actually really worried and was like "maybe just some sequins" because I thought it would be too messy, but it's gorgeous. They did originally want to just make it two genderless figures standing under a rainbow on the cover, but I thought that just wasn't gay enough - a rainbow on a summer camp logo doesn't read as especially gay to me - so I asked them to find some other way to get the rainbow in, and they did! I love it. It's glittery, it's gay, it's fantastic.

I think Drafting is the fun part, but revising is where the work is, and so often is more satisfying. This is also varies depending on how much I outline, which varies book to book - but usually I'm only really outlining a few chapters ahead. So there's a lot of pleasure in finishing off that scene, getting those threads you've been pulling to come together, reaching the climax. But then you go back and read it and it's kind of a mess. So making it not a mess, tightening things, clarifying, reorganizing to create more drama - making it work - that's the satisfying part. Because then it's like "oh right, I did have a great idea, and I can do it." A first draft is fun and creative, but it's a mess - it should be a mess. Editing is turning that mess into art.

Back to when I was a small child writing stories in crayon? I mean... I've learned a lot since then, so it's hard to narrow it down. But as an adult, and thinking about my time as a published author, which is nearly a decade now, I think what I've learned most is about the business, which is important if you want to be a professional writer. Advocate for yourself, figure out how to achieve your vision while still listening to critique, and get a good accountant. Those are all really important.

It just came out. Cool For the Summer, by Dahlia Adler. Always look forward to a Dahlia Adler book. That's an order.

I have a new adult mystery series coming out! The first book, Lavender House, is going to be released Fall of 2022. It's a historical private eye, in 1952 San Francisco. He's a cop who gets kicked off the force after being caught in a gay club. He's then approached by a woman who asks him to solve the murder of her wife. The series is historical but also has a queer cop and he essentially is going to solve queer mysteries. All pre-stonewall, so we get to get into a lot of the history that people might not know about. I'm really excited for it. The first one is sort of like Camp, in that it's a big queer family, but also, like, what if they were all adults in the 1950s and one of them is a murderer?! It's Knives Out, but gay and historical. I love it so much and I'm so excited for people to see it.

Three winners will each receive a copy of CAMP (L.C. Rosen) ~ (US Only)

The cover of this book is absolutely adorable!

0
The cover of this book is absolutely adorable!
Cancel Update Comment

The cover is perfect for this exciting book.

0
The cover is perfect for this exciting book.
Cancel Update Comment
How to resolve AdBlock issue?
X