Author Chat with Kathleen Peacock (You Were Never Here) Plus Giveaway! ~ (US Only) Today we're excited to chat with Kathleen Peacock author of

You Were Never Here.

Read on for more about Kathleen and her book, plus a giveaway! 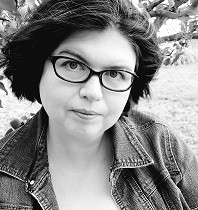 Kathleen Peacock spent most of her teen years writing short stories—all of which contained much angst and none of which survived high school. After working as a graphic designer, unofficial technical writer, and publicist, she returned to school to pursue an undergraduate degree. She lives in New Brunswick, Canada—just a few hours from the border with Maine—and is the author of You Were Never Here and the Hemlock series.

Meet You Were Never Here! 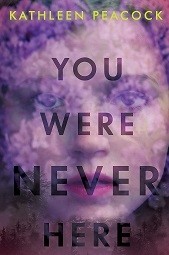 Cat hasn’t been to Montgomery Falls, the town her family founded, since she was twelve years old. Since the summer she discovered she could do things that no normal twelve-year-old could do. Since she had her first kiss with Riley Fraser. Since she destroyed their friendship.

Now, five years later, she’s back and Riley has disappeared.

For the last three months no one has heard from or seen Riley. And while there are all sorts of conspiracy theories about where he went, neither the police nor his parents are any closer to finding him. When Noah, Riley’s brother, asks for help in discovering what happened, Cat is torn between wanting to learn the truth and protecting the secret that she’s been guarding ever since that summer she and Riley stopped speaking.

But then a girl is discovered floating in the river, barely alive with no knowledge of who attacked her or why. With the possibility that someone out there is hunting teens, Cat must make a choice: Use her unusual ability to discover the truth and find Riley or keep running away from a power she can’t control. Only one choice will put her in a killer’s sights…

YABC:  Who is your favorite character in the book?
My favorite character is definitely Skylar. She dresses like Wednesday Adams six days of the week and has been described as a puppy, hurricane, and avenging angel. She also tries desperately to hide the fact that she is achingly lonely despite having a small group of friends. Originally, she appeared in You Were Never Here a handful of times, but people who read early drafts kept asking me to include her in more scenes.  The more I did, the more I started to realize that her friendship with the main character was possibly the most important relationship in the book.

YABC:  Do you have a favorite writing snack?
I’m currently partial to mini Kit-Kat bars or Ritz crackers.

YABC:  Thinking way back to the beginning, what’s the most important thing you've learned as a writer from then to now?
I’m not sure how well I’ve learned it, but I feel like writing for yourself and not for what you think others (or the market) wants is pretty good advice. I wasn’t sure if You Were Never Here would be salable and I didn’t let myself think about agents or publishers or audiences too much when I wrote the first draft (although I thought about those things more as I revised). I think making a conscious effort not to think too much about those things and to just write a book that I would want to read is why the writing went faster than it had with some other projects.

YABC:  What’s up next for you?
Hopefully, more books! I’ve got a few unfinished projects that I keep working away at. I decided to go back to school to get a university degree* a few years ago and am also in the process of completing that.
* Friendly reminder that you do not need a university degree or to have taken creative writing courses to write (though I certainly think those things can be valuable). My decision to go back to school was unrelated to writing.

YABC:  Are there any film adaptations, tv shows, audiobooks, or other adaptations in the works for this book?
You Were Never Here is actually the first of my books to get an audiobook, and that was just so, so exciting. I loved listening to potential narrators and having the opportunity to have some feedback in the process. I also think it would be so, so cool to have a film or tv show based on one of my books. I’m really interested in how works change as they move from medium to medium, and it would be fascinating to see that process happen with something I’ve written.

YABC:  Which was the most difficult or emotional scene to narrate?
I think probably the scenes where Cat, the main character, was reflecting on the breakup of her childhood friendship with Riley (the boy who is missing in the novel) or the breakup of her friendship with her best friend back in New York were the most emotional for me to write. I’ve gone through a couple of really painful friendship breakups. Writing those scenes brought them rushing back.

YABC:  Which character gave you the most trouble when writing your latest book?
I feel like Lacey, Cat’s best friend back in New York, was the hardest to write—even though she isn’t in the book very much. Cat is hurting over the breakup of their friendship and that clouds the ways in which she allows herself to think of Lacey. Thinking about the good parts of their friendship is too painful and reminds her of what she’s lost, so she focuses on the bad elements. But people are rarely all good or all bad and we find out that there were elements of the friendship that were hurting Lacey, too. I found that really tricky to write.

YABC:  Which part of the writing process do you enjoy more: Drafting or Revising?
I find the first few weeks of drafting on any project really difficult. I always feel like I’ve forgotten how to do everything and I have to practically bribe myself to write every day. After a few weeks, though, I usually hit a rhythm where I get lost in writing. Almost like I’m in that zone people sometimes talk about. At those times, drafting is the part I enjoy most.

You Were Never Here

This book look so good! Can't wait to read it. Love the cover!

0
This book look so good! Can't wait to read it. Love the cover!
Cancel Update Comment