Today we're excited to chat with Kaja Blackley author of

Maggie MacCormack and the Witches' Wheel.

Read on for more about Kaja and his book!

Kaja Blackley, born in Canada, spent many of his formative years in New York City — an environment he credits for setting him on his creative path: “The city wasn’t very beautiful to my five-year-old self, but the creative energy was intoxicating.”

Saturday morning cartoons, comic books, Where the Wild Things Are and The Chronicles of Narnia were the key that opened the door to his childhood imagination. He drew all the time and later discovered that writing stories was just as interesting as making pictures. One of Kaja’s stories has been made into a Hollywood movie, and he was named One of The One Hundred Canadians to Watch by Maclean’s magazine.

Maggie MacCormack and the Witches’ Wheel is Kaja’s first novel in the young adult genre, and the culmination of his artistic endeavours.

Kaja Blackley lives in Canada, with his wife and two children. Kaja’s blog on art and the creative process is updated regularly: http://kajablackley.com/blog/ 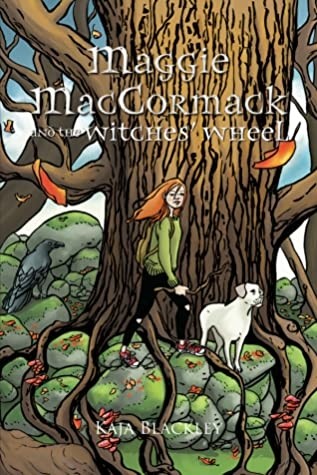 Maggie is a ginger-haired, twelve-year-old orphan who has been passed from one foster family to the next all her life. She never knows where she’ll end up so she’s become suspicious and independent, scrappy and resourceful.

As the story begins, Maggie is placed yet again into foster care – this time into a much more welcoming family. But Maggie can’t shake the feeling that something is a bit irregular about her new home and its charming, yet eccentric, inhabitants. She slowly ends up having to toss everything she understood about herself and her life out the window. But by that time, things have gone pear-shaped – it’s too late for her to run from the approaching danger.

Hard and soft cover editions of Maggie MacCormack and the Witches' Wheel are also available from: https://www.maggiemaccormack.com

I exposed her to the wonders of reading from a very early age. At the corner of our street was a marvellous bookstore called Mabel’s Fables, which is still around, still inspiring children.

At least once a week, I would walk with my daughter to Mabel’s and we would select a new book to read together. We started with classics like The Secret Garden, Alice Through the Looking Glass and Narnia.

As she began to read on her own, I was struck by the lack of modern fictional female heroes whose adventures she could share. Now, there may have been characters and books I missed, but there didn’t seem to be a strong female lead. I decided that I was up for the task, and set out to create a strong female character and a fictional world that nurtured that strength, to inspire young women such as my daughter.

I’m a very visual person. I was an artist before I was a writer, and so, I see images first. Then I hear my characters’ voices (even full conversations), and then a story comes to me with the rush of a tsunami.

I envisioned a twelve-year-old girl, with red hair, green eyes and freckles. She was standing in a forest of knotted trees with orange leaves twirling around her. She was wearing army boots with a star painted on each toe. She introduced herself as “Maggie MacCormack”. Her Scottish brogue was gentle but distinct.

Once I knew Maggie’s name, the title followed. My imagination took over and it seemed the novel just wrote itself.

YABC:  Which part of the writing process do you enjoy more: drafting or revising?

I enjoy both drafting and revising equally.

I almost fall into a meditative state when I write my first draft. I often joke about being a creative medium. I tap into conversations floating around the ether and begin transcribing them at a feverish pace to insure that I don’t miss a word that I’m hearing. I never suffer from writer’s block and often complete two or three chapters a day.

Revisions are a slightly different process. It’s more about being a sculptor. You shape the story and begin to realize its image. And like a sculptor who either adds clay to, or removes clay from his subject’s brow, cheek, nose or chin to change its appearance, I might add a page of new writing to the beginning or end of a chapter, or delete a character from my story altogether.

I focus on the pace of my story and the rhythm of my dialogue during the revision process. Rarely do I ever undertake massive rewrites. My first draft often comes equipped with a very strong foundation, and revisions are simply cosmetic.

YABC:  Do you have a favourite writing snack?

A cup of coffee is my constant companion. But I’ve never met a donut I didn’t love.

I like the innocent yet foreboding quality of the illustration. It gives away nothing, but suggests so much.

I illustrated my own cover. Having the ability to write and illustrate is very liberating creatively. I just sit down at my drawing table and bring forth the composition I see in my mind’s eye.

YABC:  Are there any film adaptations, TV shows, audiobooks, or other adaptations in the works for this book?

The audiobook version of Maggie MacCormack and the Witches’ Wheel will be available this December 2020. The narrator, a Scottish theatre actor, is simply amazing!

Maggie MacCormack and the Witches’ Wheel is an environmental fantasy based on a daunting reality: there are no magic remedies for ecological degradation, but we must all do our part. I’ve selected four worthy non-profits and 10.5% of Maggie’s gross revenues are being donated as follows: Sea Legacy (2.5%), One Tree Planted (2.5%), the Barrie Food Bank (2.5%), for those nearby who live under the threat of hunger, and Toronto’s Children’s Book Bank (3%), in support of children’s literacy.

Maggie MacCormack and the Witches' Wheel

Author Chat with Michael Daswick (Zin Mignon and the Secret of the Pickled Pigs Feet), Plus Giveaway! ~ (INT)