Fifteen Hundred Miles From The Sun.

Read on for more about Jonny, the book, plus an giveaway! 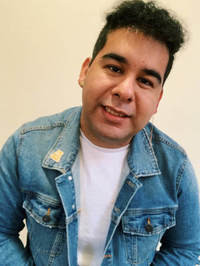 Jonny Garza Villa is a product of the great state of Texas, born and raised along the Gulf Coast, and a decade-long resident of San Antonio. Jonny is an author of contemporary young adult fiction that maintains a brand of being proudly Latinx, and the most queer, and embracing the power and beauty of the chaotic gay. Fifteen Hundred Miles from the Sun is their debut novel. For more information, visit www.jonnygarzavilla.com. 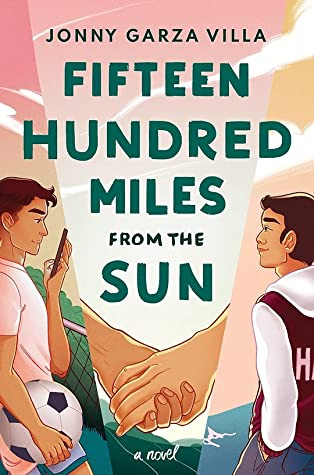 A poignant,  funny, openhearted novel about coming out, first love, and being your one and only best and true self.

Julián Luna has a plan for his life: Graduate. Get into UCLA. And have the chance to move away from Corpus Christi, Texas, and the suffocating expectations of others that have forced Jules into an inauthentic life.

Then in one reckless moment, with one impulsive tweet, his plans for a low-key nine months are thrown―literally―out the closet. The downside: the whole world knows, and Jules has to prepare for rejection. The upside: Jules now has the opportunity to be his real self.

Then Mat, a cute, empathetic Twitter crush from Los Angeles, slides into Jules’s DMs. Jules can tell him anything. Mat makes the world seem conquerable. But when Jules’s fears about coming out come true, the person he needs most is fifteen hundred miles away. Jules has to face them alone.

Jules accidentally propelled himself into the life he’s always dreamed of. And now that he’s in control of it, what he does next is up to him.

A big inspiration was Becky Albertalli’s Simon Vs the Homo Sapien’s Agenda and the adaptation, Love, Simon and wondering what Simon Spier’s journey might’ve looked like if he was a Catholic, Chicano boy living in South Texas. Other things that inspired me, though, include Selena’s “Dreaming of You,” my love of Los Angeles, my deep commitment to being obnoxiously Texan, and so much of my own personal experiences growing up closeted.

Lou! If you’ve watched On My Block, Lou as a character was very much shaped by Jasmine Flores mixed with, like, who I am when drinking. She’s just so very down for anything, loud, wild, and incredibly supportive in a way that matches all those qualities. Like, most likely to end up on a trashy reality TV show energy.

Without getting too spoiler-y about the moment, in, I think, the second to last chapter, Jules writes and delivers a letter. It was a scene that actually wasn’t in the first draft of the book; it came around during revisions and it was really a key moment in that it was the start of me letting myself dive deeper into Jules’ relationships, primarily with his dad and those moments where it gets very personal for me. I’m proud of it because, honestly, not everyone deserves redemption, and I think it’s important to show that and we see more of that.

There’s a scene between Jules and Itzel, one of his best friends, that happens shortly after his birthday. That one was both the most difficult and the most emotional scene to write and, I think out of the whole book, was the most personal in all the things Jules was feeling and letting out. Honestly, to this day there are times I can’t read that scene.

Adib Khorram once told me to stop focusing on myself and trying to be the cleverest storyteller and instead put that focus into Jules as a main character and his journey and the way this book needed to be told. Realizing the end goal of writing this story wasn’t to force out pretty prose like Benjamin Alire Sáenz but to just tell Jules’ story in the most honest way I knew how was truly life-changing and that was very much the moment of real talk that I needed.

There’s this bittersweetness about having Jules, a gay, Chicano teenager on the cover of my book. About having two brown boys on a cover and not having them be just vignettes or not drawn in full detail. Like, they’re there. They’re fully formed on that cover. And I don’t know if I can name another contemporary mlm YA novel like that. As much as I love seeing them on that cover, I hate that this is probably the singular book with a cover like that and I look forward to there being a lot more queer Chicanes on book covers of stories written by queer Chicanes.

That hasn’t been released yet? Rise to the Sun by Leah Johnson.

Oof, I didn’t read a lot last year, BUT the books I did read were phenomenal. I can’t pick between Cemetery Boys by Aiden Thomas, Efrén Divided by Ernesto Cisneros, Felix Ever After by Kacen Callender, and Picture Us In the Light by Kelly Loy Gilbert.

I was so excited to announce that my next contemporary YA novel, Ander and Santi Were Here, is coming in early 2023 with Wednesday Books. It follows Ander, a nonbinary muralist taking a gap year before heading to art school, and Santi, the newest waiter at Ander’s family’s taquería. It’s about family and community and food and San Antonio and two young people holding onto love even when the world is trying to tear them apart.

Mutual aids. If you’re looking for an organization to support, look for your local mutual aid and how to help them out, what resources they could use, and how to get involved with causes they’re putting effort into.

Fifteen Hundred Miles From The Sun