Author Chat with Jason C Joyner (Fractures) Plus Giveaway! ~ (US Only) Read on for more about Jason and his book, plus a giveaway!

Jason C. Joyner is a physician assistant, a writer, a Jesus-lover, and a Star Wars geek. He’s traveled from the jungles of Thailand to the cities of Australia and the Bavarian Alps of Germany. He lives in Idaho with his lovely wife, three boys, and daughter managing the chaos of sports and superheroes in his home. His first book is Launch, an award-winning YA superhero novel, is the first book in the Rise of the Anointed series. 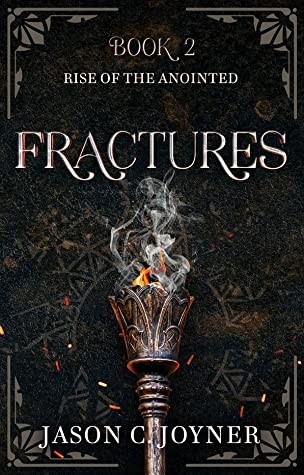 The Anointed are back. Life hasn’t been the same since Alturas’s Launch Conference. There’s not much precedent on living a normal life when your best friends all are teenagers with secret superpowers. But with John Presbus as a spiritual guide and tech genius Ratchet to employ their gifts to the fullest, Demarcus, Lily, Harry, and Sarah Jane are enthusiastic about their potential to curb the spread of evil.

As it turns out, this superhero gig isn’t as simple as it seems in the movies. The four still have to contend with family struggles and blossoming romance, not to mention keeping up with schoolwork and friendships. At the same time, powerful forces are at work beyond their control.

When the pressure’s on, they’ll see that there’s the potential for light or darkness in any of them. It remains to be seen who will choose the light.

When I get ideas, it comes from images. I pictured a black teen who had super speed, but had to keep buying new shoes because he’d burn them up. Then I saw a blonde girl who was depressed so she dyed her hair black, but the dye was burned out by her light. Those two abilities and twists on them gave me the basis for Demarcus and Lily and their backgrounds.

This is like asking me who my favorite child is! So, at this moment I’m going to say Simon Mazor, the antagonist of book 1. He is so confident and powerful in that book, but the setbacks he has means he has to claw his way back in book 2. His plans have the potential to upend the whole story for the teens.

What do you like most about the cover of the book? I came up with the torch design for my fictional social media network, and it became the theme for the covers. The evolution from the flaming torch on Launch to the smoldering, nearly doused one on Fractures speaks to the action and themes of the series so far.

Cross Shadows, a suspense novel by Andrew Huff and To Best the Boys, a YA by Mary Weber. I’m really anticipating A Sky Beyond the Storm by Sabaa Tahir on audiobook.

I’m working hard on book 3 edits, trying to give a satisfying ending to my superhero saga, and I’ve got a space opera series that I will work on after that.

Sarah Jane is the healer in my supergroup, but she can’t do it at will. She prays for people and sometimes the answer is no, and that is a challenge to show someone who is so compassionate yet has to deal with disappointment when things don’t go the way she wants.

I have a great memory. It’s easy for me to retain facts, so people look to me during Jeopardy! (RIP Alex Trebek). I try to use it for good, but I still can quote copious amounts of Monty Python and the Holy Grail.

International Justice Mission (IJM) is a group that works to provide justice for those who are trapped in slavery or in unjust situations. They work to reform laws, train police, rescue victims, and provide aftercare. They operate in the hard areas of the world, and I’m in awe of what they do.