Today we're excited to chat with Ira Marcks author of

Read on for more about Ira, his book, plus an giveaway! 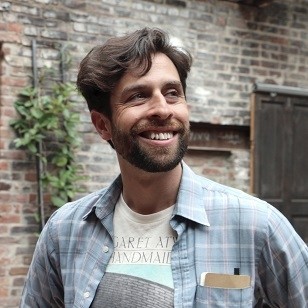 Ira Marcks is a cartoonist living in Upstate New York with his wife, two cats, a dog, and lots of books he's been meaning to read. His love for ancient magic and possible futures has led him to create a warehouse of esoteric objects for the Hugo Award-winning magazine Weird Tales and to tell stories about villainous technology for the European Research Council. Shark Summer is his debut graphic novel. 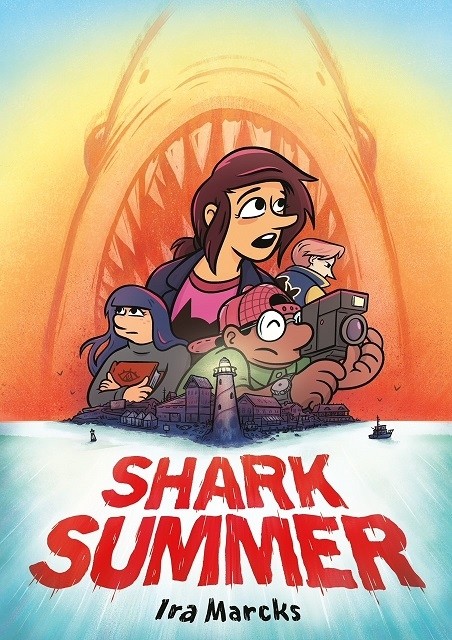 When a Hollywood film crew arrives on Martha's Vineyard with a mechanical shark and a youth film contest boasting a huge cash prize, disgraced pitcher Gayle "Blue Streak" Briar sees a chance to turn a bad season into the best summer ever.

After recruiting aspiring cinematographer Elijah Jones and moody director Maddie Grey, Gayle and her crew set out to uncover the truth of the island's own phantom shark and win the prize money. But these unlikely friends are about to discover what happens when you turn your camera toward the bad things lurking below the surface.

My love of movies and creativity! More than watching movies, I’ve always loved learning about how they were made. When you start to investigate the trials and tribulations of making a movie, you realize each one is a small miracle that requires creativity and compromise in equal measure. My curiosity for behind-the-scenes stories has inspired a lot of my storytelling and I wanted this book to focus on the brief but intense creative collaborations that happen when you work on a project. There is something very special about the kinds of bonds that happen between people in these situations. I wanted Shark Summer to capture the feeling of being caught up in the whirlwind of creating something together!

Wow, that’s a hard question. I admire Gayle for the way she takes on responsibility and I’d love to have a friend as loyal as Elijah. But if I’m being honest, Maddie is my favorite character. She has a lot of creative ideas but might not be putting them to the right use. I can certainly relate to the struggle to spend time on the right project. Maddie has a lot of potential which makes me really cheer her on. Even when she’s being pretty rude. Also, her bedroom is in a lighthouse with a lot of books (and no internet) which seems like maybe the perfect place to escape to. I bet Maddie and I would get along really well.

The premise of the book, kids on a summer adventure behind the scenes of JAWS, came to me first. That said, Shark Summer was such a perfect title it followed very quickly behind that initial spark of an idea.

There is a scene about halfway through the book where the kids interrogate a local islander named Shelly about a ghost story. At this point in the making of this book I knew the kids so well they each fell comfortably into their roles in the scene, and I was able to pay more attention to Shelly and really discover who he was as a person, not just an obstacle for the kids to overcome. Working on this scene was when I realized there could be another layer to this story I had not really considered; what happens to the background players of this story if the kids get what they’re after? This scene is short and maybe not super exciting, but it’ll always stand out as the moment when the whole world of Shark Summer came into view for me.

A good imagination will get you far and I used to pride myself on having one, but it turns out that organization is the most important thing you can have when structuring a story. Working on Shark Summer really proved to me that planning out a creative process and working through it in stages really does make a giant difference in how good the final book is. Poor planning always shows itself at some point and it’s hard to appreciate a good imagination if the story's structure is crumbling around you.

That it feels like a movie poster! The cover design was inspired by an iconic movie poster designer named Drew Struzan. He’s illustrated some of the most famous movie posters of all time including Star Wars, Indiana Jones, and Harry Potter. It was a lot of fun to have an excuse to use his amazing work as an influence and I hope it shows through in the Shark Summer cover.

It took a few drafts of the story for me to understand Lex as a real character and not just the bully of Shark Summer. She seems like the antagonist because of the influence she holds over other characters but if the story was from her point of view, she would be almost as sympathetic as the book’s main character Gayle.

I used to prefer the early drafting stages but now that I’m a more confident writer I enjoy rising to the challenge of a revision. It can be painful to edit out a good idea but went you notice the story as a whole is better without it, there’s no other feeling that compares to the success of a good revision! Plus, I think revising is good for the ego. :)

Cute and fun cover! I think this book will be fun to read with an exciting setting.

0
Cute and fun cover! I think this book will be fun to read with an exciting setting.
Cancel Update Comment

Sounds like a blast. The cover will definitely attract your targeted readers!

Both the synopsis and the cover and fun and engaging.

0
Both the synopsis and the cover and fun and engaging.
Cancel Update Comment
How to resolve AdBlock issue?
X