Author Chat with Hope Larson & Rebecca Mock (Salt Magic), Plus Giveaway! ~ (US Only) Today we are chatting with Hope Larson, author of

Read on for more about Hope, her book, and a giveaway! 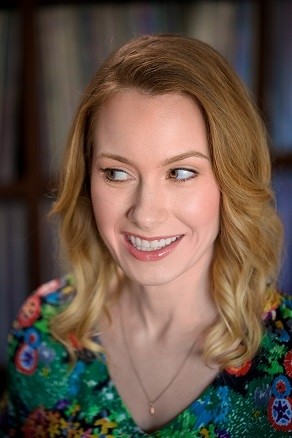 Hope Larson has written and illustrated many graphic novels including All Summer Long, which was a Kirkus Reviews Best Book of 2018 and an Eisner Award nominee, as well as its recently published sequel, All Together Now. She adapted and illustrated A Wrinkle in Time: The Graphic Novel, which spent forty-four weeks on the New York Times graphic novel bestseller list and for which she won an Eisner Award. She is also the author of Compass South (A New York Times Bestseller), and its companion volume, Knife's Edge, both illustrated by Rebecca Mock. She lives in North Carolina. 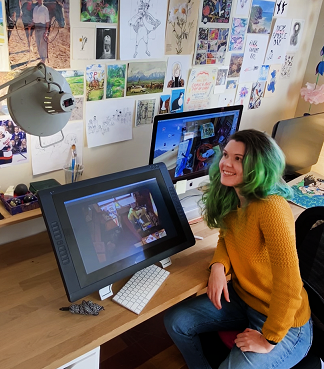 Rebecca Mock is an illustrator and comics artist. They illustrated the graphic novels Compass South and Knife's Edge, both written by Hope Larson. Their work has also appeared in various publications, including the New York Times and The New Yorker. They are the co-organizer of the Hana Doki Kira anthology. They live in Brooklyn, New York. Visit their website at https://rebeccamock.com [rebeccamock.com] 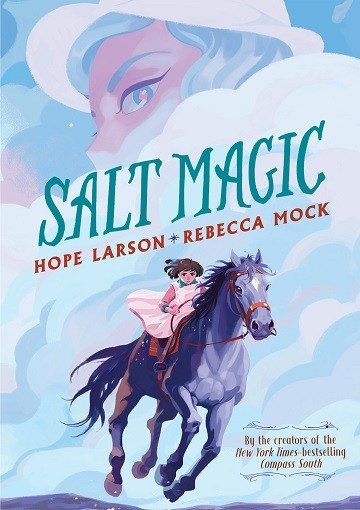 When a jealous witch curses her family's well, it's up to Vonceil to set things right in an epic journey that will leave her changed forever.

When Vonceil's older brother, Elber, comes home to their family's Oklahoma farm after serving on the front lines of World War I, things aren't what she expects. His experiences have changed him into a serious and responsible man who doesn't have time for Vonceil anymore. He even marries the girl he had left behind.

Then a mysterious and captivating woman shows up at the farm and confronts Elber for leaving her in France. When he refuses to leave his wife, she puts a curse on the family well, turning the entire town's water supply into saltwater. Who is this lady dressed all in white, what has she done to the farm, and what does Vonceil's old uncle Dell know about her?

To find out, Vonceil will have to strike out on her own and delve deep into the world of witchcraft, confronting dangerous relatives, shapeshifting animals, a capricious Sugar Witch, and the Lady in White herself--the foreboding Salt Witch. The journey will change Vonceil, but along the way she'll learn a lot about love and what it means to grow up.

Hope Larson: One of this book's themes is the limited opportunities available to women, and specifically an unmarried woman, in the early 1900s–and, to an extent, still today. A lot of avenues were closed to a girl like Vonceil, who didn't come from a life of means. Vonceil dreams of a big, adventure-filled life but that isn't really an option for her, and she's angry about it. The world is different now and we've made progress, but not as much progress as I wish we had, so I think Vonceil's anger will ring true to young readers today.

HL: Definitely Vonceil! She's difficult but brave; bratty but loyal. She's willing to go against the conventions of her time in 1919. She has a bit of that Miyazaki-heroine energy to her, and some Meg Murry energy, too.

Rebecca Mock: I’m gonna have to say Greda, the salt witch. My first impression of her was this fabulous, otherworldly, tragic femme—a classic literary character, an "evil" witch from a fairy tale. But the more I drew her and thought about her character, the more I related to her myself. What roles do the witches in our fairy tales play, in our minds? What part of ourselves do they represent?

HL: Very few of my books have gone to print with the original title I came up with, and Salt Magic is no exception. For a long time the working title was The Salt Witch.

HL: Is coffee a snack?

RM: As an artist, I’ve learned a lot about the comic form. I am always gaining deeper knowledge of the power of the comic page the more I draw. Comics tell stories on many levels, making them wonderfully layered and impactful works. With this book, for the first time, I really thought of how the script could change and evolve with the drawing, rather than just directly translating Hope’s words to pictures. It was the most collaborative project I’ve ever worked on to date and I’m very grateful.

RM: I love it’s overall simplicity, the soft clouds—but I think what I’m most proud of is Greda’s captivating look, swirling in the sky, her eye shining with the salt crystal diamond at the center.

HL: Met Her on the Mountain by Mark I. Pinsky, which is Western-NC true crime, and Hollywood Ending by Tash Skilton, which is a rom-com.

RM: Velvet Was The Night by Silvia Morena-Garcia (I enjoyed the tropey horror of Mexican Gothic and this is her next book), Unnatural Magic by C.M. Waggoner--a fantasy romance, and the last book in The Queen’s Thief series, Return of the Thief, by Megan Whalen Turner which I’ve been saving--historical fantasy with lots of drama and twists!

HL: I just read Middlemarch for the first time and it completely blew me away.

RM: I can’t recommend fan fiction, can I? Well, besides heaps of that, I recently read and enjoyed A Master of Djinn by P. Djeji Clark, a sequel to his short story The Haunting of Tram Car 015, which I loved. Really fun historical fantasy set in early 20th century Egypt! It's sort of a crime thriller with magic, and the world-building is fascinating.

HL: I'm working on another book for Margaret Ferguson at Holiday House, and the final book in the Eagle Rock series, All My Friends, will be out in spring from FSG. Aside from that, I'm working to develop several shows based on existing properties and waiting to see if one of them will be picked up or not. I think of the TV development stuff as my craft bootcamp and my books as my art, but I deeply value and enjoy both. The part that I particularly like about development is it lets me stay behind the scenes.

RM: I’m working on a new comic book for middle grade readers about young ballet dancers, competition, and friendship. That book won’t be out for a couple years, but in the meantime I’ll be self-publishing more short comics. You’ll also be seeing some of my background art in the third season of the cartoon show Close Enough, airing next year.

HL: Not yet, but here's hoping!

HL: One of the scenes that took a little while to nail was the ending. I don't know how readers will react to it, or if they'll understand what we were going for, but for me, it says everything about my hopes for Vonceil, and the way her life ended up. It's one of those open-to-interpretation scenes, which are always a gamble.

RM: The party scenes, of course! There are 3 big parties in this book. I didn’t want to skimp, these scenes needed to really feel jam-packed with people, and I needed to draw each and every one. The first party is a wedding, and involves a big bonfire dance--I needed to research dances that were popular in the 1910’s. Who knows how they danced in rural farm towns during that time? I watched some old silent films to get it right. There are also 2 ball scenes set in a fantasy world, and I wanted the guests to be a mix of complete fantasy creatures, animal people, and eccentric human characters in masquerade costumes, and hopefully it will be fun to scan the crowd and not know for sure who’s what.

HL: Definitely Dee. Working out and writing the sugar magic scenes was challenging–they were a bit technical and also fantastical, and I feel silly writing about magic–and it took a long, long time for me and Rebecca to get this character right.

HL: Revising. I really don't enjoy first drafts. The hardest part is getting some kind of framework down on the page. Revising can be a struggle, too, but at least there's something there to work with and you aren't grasping at invisible straws.

RM: In terms of the art, the drafting part is way more fun!! Sketching is the best because you can just draw, and it doesn’t need to be clean and perfect. You are just solving little puzzles. The inking phase is a long, arduous slog. It feels like it will never end, and there’s no cutting corners--every detail needs to be treated with care and attention, and you don't even get to make any more decisions, you’re basically just tracing your sketches. When you are inking page 229 of a 230 book, you feel one step away from madness.

RM: I definitely think of drawing as my superpower. When I was younger and obsessed with superhero shows and comics, or fantasy stories about magic, I would daydream about having superpowers linked to drawing, like a magic brush, or the ability to draw things in 3D space and manipulate them. Drawing itself feels magical, when I can bring something to life on the page exactly as I imagine it.

HL: Find a way to make notes work for you, and always look for the note-behind-the-note. Maybe you don't agree with an editorial note and feel it's wrong, but what about the scene or character is making the editor respond the way they are? Basically, try to see things from another angle instead of getting defensive and digging in your heels. This one took me a while to learn, but once I did it's continued to serve me well.