Author Chat with Gene Luen Yang (Superman Smashes The Klan), Plus Giveaway! ~ (US Only) Read on for more about Gene and his book, plus an giveaway. 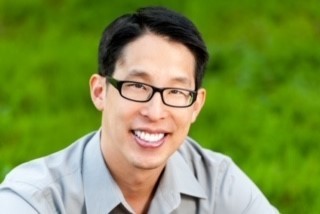 Gene Luen Yang writes, and sometimes draws, comic books and graphic novels. As the Library of Congress’s fifth National Ambassador for Young People’s Literature, he advocates for the importance of reading, especially reading diversely. American Born Chinese, his first graphic novel from First Second Books, was a National Book Award finalist, as well as the winner of the Printz Award and an Eisner Award. His companion graphic novel project Boxers and Saints won the L.A. Times Book Prize and was a National Book Award finalist. His other works include Secret Coders (with Mike Holmes), The Shadow Hero (with Sonny Liew), Superman from DC (with various artists) and Avatar: The Last Airbender series from Dark Horse Comics (with Gurihiru). In 2016, he was named a MacArthur Foundation Fellow. His most recent books are Dragon Hoops from First Second Books and Superman Smashes the Klan from DC. 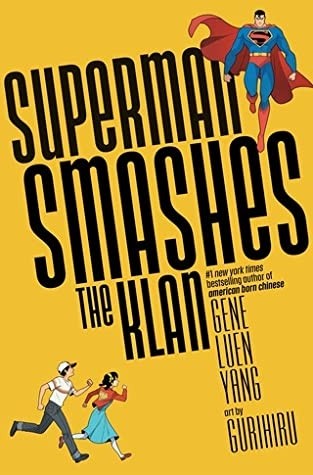 The year is 1946. Teenagers Roberta and Tommy Lee just moved with their parents from Chinatown to the center of Metropolis, home to the famous hero, Superman. Tommy makes friends quickly, while Roberta pines for home. Then one night, the family awakens to find their house surrounded by the Klan of the Fiery Kross! Superman leaps into action, but his exposure to a mysterious green rock has left him weak. Can Roberta and Tommy help him smash the Klan?

Superman Smashes the Klan is an adaptation of one of the most important Superman stories ever. Back in 1946, the Superman radio show aired a 16-episode storyline called “The Clan of the Fiery Cross.” The story goes like this: A Chinese American family moves to Metropolis. A group of hooded racists feels threatened and burns a cross on the family’s lawn. Superman, his friends at the Daily Planet, and the Chinese American family team up to take down the Klan. After the story aired, the real-life Ku Klux Klan experienced a steep drop in membership. Nobody wanted to join an organization that the Man of Steel called out as a hate group.

Amazingly, “The Clan of the Fiery Cross” had never been adapted to comics. Art team Gurihiru, letterer Janice Chiang, and I wanted to fix that oversight.

Scooby Snacks. Just kidding. I mostly eat trail mix, dried mangoes, and beef jerky to get through the day.

Push to the finish line. With every project I’ve ever done, I’ve felt like quitting when I was three-fourths of the way done. Some other shiny new idea will pop up in my head, and I’ll want to move on. It took me a long time to realize that feeling is normal, and that it goes away if I can just push to the finish line.

Gurihiru’s drawings. Gurihiru drew both the cover and the interiors of the book. They’re an art team based in Japan. They’ve done a bunch of work for other publishers, but Superman Smashes the Klan is their first book for DC. Their art is phenomenal, including the cover.

I’m really proud of being part of the DC Books for Young Readers line. It’s such a fresh, new approach to superheroes. There’s a stack of graphic novels on our family’s coffee table, including Green Lantern: Legacy by Minh Lê and Andie Tong, Shadow of the Batgirl by Sarah Kuhn and Nicole Goux, and Diana: Princess of the Amazons by Shannon Hale, Dean Hale, and Victoria Ying.

There’s a scene in the final chapter where Superman and Roberta have a heart-to-heart. We went through multiple versions before landing on what’s in the final version of Superman Smashes the Klan. I’m really grateful to my editors at DC for their guidance on this.

Chuck is the nephew of a Klan leader. In the original radio show, he has a pretty dramatic character arc, and we kept that. I wanted to make our version of Chuck as realistic as I could, so I read about a few books about the real-life Klan. Rising Out of Hatred by Eli Saslow was especially helpful. It’s about Derek Black, the son of a white supremacist who eventually leaves his father’s ideology.

The local comic shop is close to my heart. I used to visit every week as a kid. It was a place where I bonded with my comics-loving friends and brother. I know there are all sorts of things to worry about in our current crisis, but I do worry about the women and men whose livelihoods depend on local comic shops. The Book Industry Charitable Foundation is trying to save our comic shops and independent bookstores, so they’re close to my heart, too.

Really excited for this book, I've always loved this true story of Superman, and look forward to reading the graphic novel version!

I'm really looking forward to reading this one. It seems so different than the other Superman comics I've read.

0
I'm really looking forward to reading this one. It seems so different than the other Superman comics I've read.
Cancel Update Comment

I like the cover. Superman has always been a favorite of mine, so this book sounds fun.

0
I like the cover. Superman has always been a favorite of mine, so this book sounds fun.
Cancel Update Comment

The cover is really fun. I'm behind Roberta, Tommy and Superman.

0
The cover is really fun. I'm behind Roberta, Tommy and Superman.
Cancel Update Comment
How to resolve AdBlock issue?
X