Author Chat with Gavriel Savit (The Way Back) Plus Giveaway! ~ (US Only) Today we're excited to chat with Gavriel Savit author of

Read on for more about Gavriel and his book, plus a giveaway! 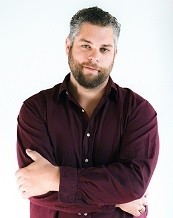 Gavriel Savit is a New York Times Bestselling author. His award-winning writing has been shortlisted for the National Book Award, and has been translated into nineteen languages. As a performer, he has appeared on and off-Broadway, and on stages around the world.

Meet The Way Back! 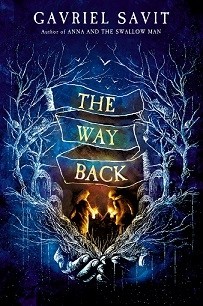 Perfect for readers of Neil Gaiman and Philip Pullman, a sweeping historical fantasy that follows two teens on a journey through the Far Country, a Jewish land of spirits and demons.

For the Jews of Eastern Europe, demons are everywhere: dancing on the rooftops in the darkness of midnight, congregating in the trees, harrowing the dead, even reaching out to try and steal away the living.

But the demons have a land of their own: a Far Country peopled with the souls of the transient dead, governed by demonic dukes, barons, and earls. When the Angel of Death comes strolling through the little shtetl of Tupik one night, two young people will be sent spinning off on a journey through the Far Country. There they will make pacts with ancient demons, declare war on Death himself, and maybe-- just maybe--find a way to make it back alive.

Drawing inspiration from the Jewish folk tradition, The Way Back is a dark adventure sure to captivate readers of Neil Gaiman's The Graveyard Book and Philip Pullman's The Book of Dust.

I love so many of the characters in The Way Back-- even some of the demons!-- but I think one of my favorites has to be Mottke, the drunken ferryman. He's sweet and strange, and might surprise you in the end...

Always the novel. I struggle with titles a lot, and this project was no different. The working title was A Light in Dark Places, which was a phrase I  took from the Lord of the Rings movies, but which, it turns out, has been used a lot. I sold it under The Gravefarers, which was a title I worked pretty hard on, but which ended up being just a little bit too obscure and hard to pronounce-- it's hard not to say "Grayfairs." After a lot of back and forth, we finally settled on The Way Back, which was originally a chapter title, but which I think suits the book well. Just don't get it confused with that Ben Affleck film!

I always sit down in the morning to write with a big glass of cold brew-- so much so that my two year old daughter often play-works by sitting down on the couch with her etch a sketch "computer" and a little water bottle rattle she calls her "cole bwoo."

I think Leo Nickolls' cover art is wonderful. The gravestones and the cats hidden in the trees, the way the title is written on the scarf, the hands holding the whole composition-- it's totally fabulous. If I have to single one thing out, though, I'd say my favorite thing is the inviting depth in the contrast between the chilly blue cover, and the warm, firelit glow between the trees. It's so much like what I had in my head while I was writing!

During Covid, I've been working my way through Patrick O'Brian's Aubrey/Maturin series, so I've got volume 10, The Far Side of the World; Neil Gaiman's The Ocean at the End of the Lane; Marlon James' Black Leopard, Red Wolf; Walter M. Miller Jr.'s A Canticle for Leibowitz; and Humphrey Carpenter's biography of J.R.R. Tolkien.

I just read Susanna Clarke's incredible Piranesi. It's tight, beautiful, exciting, and magical, and I can scarcely recommend it enough.

The audiobook of The Way Back will be released at the same time as the print edition! It's performed by the incomparable Allan Corduner who read the Odyssey Award winning audiobook of my first novel, Anna and the Swallow Man. I can't wait for you all to hear it!

This is like asking Which do you prefer, digging a six foot hole in the dirt with your fingernails, or smoothing it out with a toothbrush? In truth, both drafting and revising have their particular joys and challenges: I love the way things seem to appear out of thin air when you're drafting, but the struggle to bring something out of nothing can be really disspiriting. On the other hand, revising is faster paced-- it's certainly quicker to fix things than it is to generate them-- but, if done properly, revision requires you to continuously confront your own inadequacies, which is hardly comfortable. That being said, I am a firm believer that all great writing happens in revision; a first draft can only ever be an arrangement of ideas, even if they're good ones.

You should taste my challah, baby.