Author Chat with Emily A Duncan (Wicked Saints), Plus Giveaway! ~ (US Only) Today we're excited to chat with Emily A Duncan author of Wicked Saints.

Read on for more about Emily, an interview, plus an giveaway! 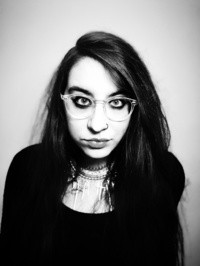 EMILY A. DUNCAN works as a youth services librarian. She received a Master’s degree in library science from Kent State University, which mostly taught her how to find obscure Slavic folklore texts through interlibrary loan systems. When not reading or writing, she enjoys playing copious amounts of video games and dungeons and dragons. Wicked Saints is her first book. She lives in Ohio. 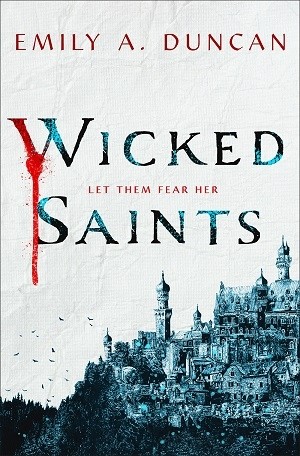 In a centuries-long war where beauty and brutality meet, their three paths entwine in a shadowy world of spilled blood and mysterious saints, where a forbidden romance threatens to tip the scales between dark and light. Wicked Saints is the thrilling start to Emily A. Duncan’s devastatingly Gothic Something Dark and Holy trilogy.

Oh, definitely the nightmare goth boy, Malachiasz. He was an unexpected addition to the book--when I first introduced him I’d meant for him to only be around for three chapters, just long enough to nudge Nadya in the direction she needed to go before he went off on his own way, but instead he took the plot in his hands and twisted it around to being more about him than I had ever intended. He’s the worst and I adore him.

The novel! I called it ‘the damn cleric book’ for the entire drafting process. It didn’t have a title until I queried it and then it was Something Dark and Holy (which I had nothing to do with, my friend RJ Anderson titled it!) and then we landed on Wicked Saints after the book sold.

YABC:  scene in the book are you most proud of, and why?

There’s a scene midway through the book where Nadya comes across a wayside shrine on the road and stops to clean it. Malachiasz pauses with her, waiting for her to finish so they can catch up to the others, and they have a long and rather heated discussion about theology. The scene was a later addition but, for me, the heart of the book happens in that moment, where these two kids who are both incredibly set in their own specific beliefs take the time to stop and talk about those differences.

YABC:  Thinking way back to the beginning,

what’s the most important thing you've learned as a writer from then to now?

Sometimes you just have to let things go. I worked on the same book for eleven straight years of my life, convinced that it was The One. That book was not Wicked Saints. It wasn’t until I acknowledged that I had to let that book go and do something else that I was able to write Wicked Saints, and sometimes that’s all it takes. Sometimes you’re holding onto something that is also holding you back, and you need to step past it to see that.

It looks like it could be the cover of an edition of Gormenghast and I adore that. Also, it’s very metal.

There are so many! 2019 is a fabulous year for books! But for me especially, Gideon the Ninth by Tamsyn Muir! The Devouring Gray by Christine Lynn Herman! Wilder Girls by Rory Power! Sorcery of Thorns by Margaret Rogerson! The Candle and the Flame by Nafiza Azad! King of Fools by Amanda Foody! So many!

I’m still putting the finishing touches on book two, but I am wildly excited for it! My cosmic horror forest road trip book! My weird cerebral nightmare fantasy! If you take the end of Wicked Saints and stretch that bizarre atmosphere out for a full book, that’s this one! It was incredibly difficult to write and I’m very proud of it.

~Malachiasz~ I swear, he’s the answer for any character related question I get! But he was a wild card. Most of the drafting process was me thinking I knew what was going on and Malachiasz turning around and shifting all the pieces of the story into a jumbled mess before moving on. And then he proceeded to do that every three chapters until the end.

I hate drafting! So much! I much prefer revising, after I’ve gotten the bones of the story figured out and I can go back and rethink how scenes are framed and what’s working or what’s not and what needs to be threaded better. Drafting just frustrates me immensely.

By: Emily A Duncan

Love this cover! Can't wait to read this book!

This cover is GORGEOUS and it sounds amazing

Love the cover!! So excited

The cover is so pretty! very excited to read this book

0
The cover is so pretty! very excited to read this book :)
Cancel Update Comment

This cover is everything!!!!

Can I just start by saying how much I really like the cover? It's so pretty. But also, I've been dying to read this book. it's one of my most anticipated this year.

0
Can I just start by saying how much I really like the cover? It's so pretty. But also, I've been dying to read this book. it's one of my most anticipated this year.
Cancel Update Comment

The cover hints at the violence to come. I really like it. The story sounds enticingly dark.

0
The cover hints at the violence to come. I really like it. The story sounds enticingly dark.
Cancel Update Comment

So excited about this book. The concept is so beautifully dark and the author seems like such an interesting person. I can not wait to read this and add it to my collection!

0
So excited about this book. The concept is so beautifully dark and the author seems like such an interesting person. I can not wait to read this and add it to my collection!
Cancel Update Comment
Previous     Next
1 2
How to resolve AdBlock issue?
X