Today we're excited to chat with Eden Royce author of

Read on for more about Eden and her book, plus a giveaway! 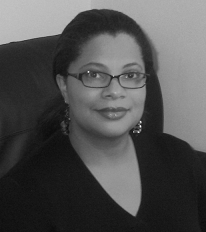 Eden Royce grew up immersed in rootworking traditions in South Carolina, and has been known to work a spell or two herself. She is a member of the Gullah-Geechee nation, and her fiction has appeared in PodCastle, FIYAH Literary Magazine of Black Speculative Fiction, and Sycorax's Daughters, a Bram Stoker Award-nominated anthology of Black women’s horror fiction and poetry. She is also the recipient of the Speculative Literature Foundation’s Diverse Worlds grant for “Doc Buzzard’s Coffin,” the short story in which the character of Jezebel from Root Magic first appeared. She now makes her home in Kent, England. “A poignant, necessary entry into the children’s literary canon, Root Magic brings to life the history and culture of Gullah people while highlighting the timeless plight of Black Americans. Add in a fun, magical adventure and you get everything I want in a book!”—Justina Ireland, New York Times bestselling author of Dread Nation

Debut author Eden Royce arrives with a wondrous story of love, bravery, friendship, and family, filled to the brim with magic great and small.

It’s 1963, and things are changing for Jezebel Turner. Her beloved grandmother has just passed away. The local police deputy won’t stop harassing her family. With school integration arriving in South Carolina, Jez and her twin brother, Jay, are about to begin the school year with a bunch of new kids. But the biggest change comes when Jez and Jay turn eleven— and their uncle, Doc, tells them he’s going to train them in rootwork.

Jez and Jay have always been fascinated by the African American folk magic that has been the legacy of their family for generations—especially the curious potions and powders Doc and Gran would make for the people on their island. But Jez soon finds out that her family’s true power goes far beyond small charms and elixirs…and not a moment too soon. Because when evil both natural and supernatural comes to show itself in town, it’s going to take every bit of the magic she has inside her to see her through.

My inspiration came from listening to stories my elders told when I was younger. I wanted to tell tales they would recognize, ones that hadn’t had the chance to see the light of day very often, if ever. I also wanted to portray Southern conjure magic in its original form and with its original intent: as protection and healing for the rootworker and their loved ones, instead of the evil practice most film and other media depict it as.

I don’t eat while I’m writing, but I’ll usually have a cup of coffee or tea, depending on my mood.

Be persistent. Keep at it even when you think no one is paying any attention.

The tiny details: Jez’s hair texture and her doll, Jay’s potion bottle, my name reflected in the water.

My next book is another magical adventure this time set in present day.

The opening scene in Root Magic where Jez is saying good-bye to her grandmother. It was incredibly emotional to write, as my own grandmother was such a huge part of my life.

Revising. I already have the storyline complete, so I can focus more on polishing the language, adding fine detail, and making the book shine.

Love the cover and the story sounds so interesting!

0
Love the cover and the story sounds so interesting!
Cancel Update Comment

0
Getting your lover or your ex back has been made more easy by this powerful spell caster called Dr Odion. I am Rose by name and i am from canada, the only reason why i am on this site is to thank this powerful spell caster called DR. Odion and you can improve your relationship success by contacting him through these details (wisdomspiritualtemple@gmail.com Or call +2348136482342) This powerful spell caster did me a huge favor by helping me get my lover back to me within the speed of light and since then my relationship has been perfect. any problem of yours.He is specialized in the following: (1)Spell for protection from danger (2)Spell for magic (3)Spell for same sex love (4)Spell for healing (5)Spell for invisibility (6)Spell for riches and fame (7)Spell to get a good job (8)Spell for strong love and relationship (9)Spell to bring your ex back (10)speII for Lottery This man has great powers and is incredibly generous.You can contact him on (wisdomspiritualtemple@gmail.com)
Cancel Update Comment

The cover and premise match--I love the magic promised inside of this unique book.

0
The cover and premise match--I love the magic promised inside of this unique book.
Cancel Update Comment

The cover is beautiful. The story is magical and important.

0
The cover is beautiful. The story is magical and important.
Cancel Update Comment

The cover is perfect and the story sounds very interesting. Best wishes on the novel.

0
The cover is perfect and the story sounds very interesting. Best wishes on the novel.
Cancel Update Comment

I just know this book will be magical! And I love the artwork on the cover!

0
I just know this book will be magical! And I love the artwork on the cover!
Cancel Update Comment

This cover is so pretty. I think my niece will enjoy reading this story, too.

0
This cover is so pretty. I think my niece will enjoy reading this story, too.
Cancel Update Comment
How to resolve AdBlock issue?
X