Author Chat with Chad Sell (The Cardboard Kingdom #2: Roar of the Beast), Plus Giveaway! ~ (US Only) Today we're excited to chat with Chad Sell author of

The Cardboard Kingdom: Roar of the Beast.

Read on for more about Chad, his book, plus an giveaway!

Chad Sell's first children's graphic novel was The Cardboard Kingdom, which he illustrated and co-wrote with a team of ten collaborators. This same team came together again to create The Cardboard Kingdom: Roar of the Beast. Chad's first full-length solo project, Doodleville, is set in Chicago, where he lives with his husband and two cats.

Meet The Cardboard Kingdom #2: Roar of the Beast! 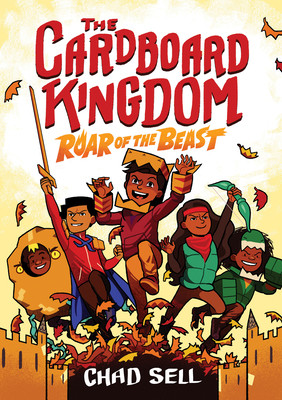 Perfect for fans of Raina Telgemeier and All's Faire in Middle School, this sequel to the Eisner Award-nominated The Cardboard Kingdom follows the kids as they solve the mystery of a new neighborhood monster.

A mystery is afoot in the Cardboard Kingdom.

Vijay, the Beast, renounces his title after being bullied by neighborhood teenagers. No one--not his big sister Shikha or his friends--can seem to draw him back out of his shell.

That very night is when it starts. At first, no one believes Nate, who breaks his leg trying to pursue what he saw from his bedroom window. But then there's another, and another. An unknown monster has been spotted roaming the Kingdom after dark. It's ghastly, it's quick, and it might even have giant tentacles. Or claws. Or wings. Okay, there might be some varied testimonies on what exactly this monster looks like.

Forget Halloween--the newly minted Monster Mashers will go to any lengths to protect the Kingdom and uncover this mystery. But how did the monster get here? What does it want? And mostly importantly, who is behind its creation?

I wrote ROAR OF THE BEAST with 9 other writers, and we wanted to try something different from our first book in the CARDBOARD KINGDOM series, which took place during summer break. ROAR OF THE BEAST is set right before Halloween, and some kids in the neighborhood start seeing glimpses of a shadowy monster outside at night.

We wanted to explore how the different characters in the Cardboard Kingdom would react to a mysterious new threat to their neighborhood – Who among them would rise to defend their Kingdom? Who would try to study it and understand where it came from? Would it bring out the best in our characters…or the worst? Since we have such an enormous cast of kids in the CARDBOARD KINGDOM books, we were able to examine a lot of different approaches and responses to the problem, and we had a heck of a lot of fun doing it!

I generally don’t like to pick favorites, but I’m especially excited about the evolution of Jack the Sorceress in ROAR OF THE BEAST. Jack takes a lot of small steps in exploring how he can be a little bit more like his fantasy character The Sorceress in his everyday life, and it turns out to be a really sweet and subtle journey.

I first came up with the CARDBOARD KINGDOM title a very long time ago and worked on countless iterations of it before figuring out the right approach. And then we came up with ROAR OF THE BEAST as we were putting together the book with lots of input from our team at Knopf Books for Young Readers.

There are a lot of big, dramatic scenes in ROAR OF THE BEAST, but one of my favorites is a short scene between Jack the Sorceress and Miguel the Rogue that is pretty late in the book. They’re VERY different characters, but they also have a lot in common, and they were able to connect in a meaningful way amidst all the giant Monster chases and surprise twists. It’s an understated scene where they’re each essentially saying: I see you.

I had struggled to get my own books published for years before finally trying out the uniquely collaborative way we wrote the original CARDBOARD KINGDOM. That was really crucial for me—understanding when it might be best to work with others and how to do that! As I’ve tried several different arrangements across various projects, I think that I’m gradually getting a better sense of how to work with a group of people, set expectations, and communicate well!

I love the warm fall colors of the cover! I wanted the look of ROAR OF THE BEAST to be distinctive from the original CARDBOARD KINGDOM, but I also wanted the two books to look great alongside each other! I got a lot of great input on that from my art director Sylvia Bi and my editor Marisa DiNovis

Actually, my friend Keiler Roberts’ new book MY BEGGING CHART just came out a week or two ago, and that may end up being my favorite book of 2021! I love how she captures the rhythms of relationships and everyday moments of poignance and hilarity.

It was THE MAGIC FISH by Trung Le Nguyen—such an incredible, astounding debut of a graphic novel! Trung did so many inventive, exciting things with the language of comics, and he employed all that innovation to tell a layered, beautiful story. I think that THE MAGIC FISH will have a huge impact on the world of comics in the years to come.

I am finishing up work on the final art for the second book of my DOODLEVILLE series, planning the future for CARDBOARD KINGDOM, and working on an unannounced superhero series with my friend Mary Winn Heider! I’m hoping to stay pretty busy over the next few years!

So, my very favorite part of making my graphic novels is when I first start drawing my rough draft of the story. It’s after we’ve figured out the main story beats, and we might have a script hammered out, but it’s only when I actually start sketching out what happens panel-by-panel that the story really springs to life for me!

I think my superpower is that I have developed a better sensitivity and tolerance for my own limits as a storyteller. I can tell when an idea is half-baked, and I can move on to something else while I noodle away at different facets of my stories. I try not to get stuck on a plot point or character decision – instead, I go with the flow, look for a place in my script where I can be productive, and take breaks as necessary.

The Cardboard Kingdom: Roar of the Beast

One winner will each receive a copy of The Cardboard Kingdom: Roar of the Beast (Chad Sell) ~ (US Only)