Author Chat with Chad Sell (Doodleville), Plus Giveaway! ~ (US Only) Today we're excited to chat with Chad Sell author of

Read on for more about Chad and his book, plus a giveaway!

CHAD SELL’S first children’s graphic novel was The Cardboard Kingdom, which he illustrated and co-wrote with a team of ten collaborators. Doodleville is his first full-length solo project, and it is set in Chicago, where he lives with his husband and two cats. Much of the story takes place in Chad’s neighborhood of Lincoln Square and at one of his favorite places in the world: the Art Institute of Chicago. 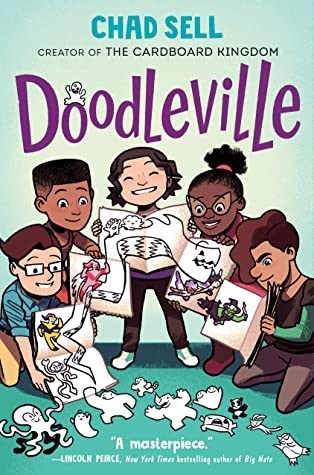 Drew is just a regular artist. But there’s nothing ordinary about her art. Her doodles are mischievous. . . and rarely do they stay in Doodleville, the world she’s cerated in her sketchbook. Instead, Drew’s doodles prefer to explore the world outside. But after an inspiring class trip to the Art Institute of Chicago—where the doodles cause a bit too much trouble—Drew decides it’s time to take her artistic talents to the next level.

Enter the Leviathan—Levi, for short. He’s bigger and better than anything Drew has ever created before. He’s a monster, but a friendly one. That is, until Levi begins to wreak havoc on Drew’s other doodles—and on the heroes her classmates have dreamt up.

Levi won’t be easily tamed, and it seems there is a link between the monster’s bad behavior and Drew’s feelings. With the help of her loyal art club friends, will she be able to save Doodleville—and Levi—before it’s too late?

DOODLEVILLE is an incredibly personal book for me, because it’s about a young artist named Drew who goes through all the same struggles that I have.

As a young artist, drawing can feel like magic, as if you can conjure incredible cartoon characters out of nothing with just a piece of paper and a pencil! Those characters can surprise you, they can take on a life of their own, and they may even grow alongside you all of your life!

But with any kind of creativity, we can often be our own worst critics. We can compare ourselves to others, start doubting ourselves, and become hobbled by insecurity and worry.

DOODLEVILLE is about getting through all of that and finding hope and help in your friends and family to overcome those demons.

I drink so much tea while I work! It’s a nice ritual to step away from my desk for a few minutes, brew up a cup of tea, relax, daydream, and then get back to work.

I think a growing sense of self-awareness is what’s been most crucial in my development as a writer. Writing an entire book is an incredibly complicated process—there are so many moving parts, so many layers, and it’s drawn out over such a long period of time! There are lots of things that can trip you up along the way. You can get carried away with an early idea, but then realize that you’ve gone off in a weird direction that isn’t telling the story you meant to tell. You might get stuck on one plot point forever, unsure how to get from A to B. But as I’ve matured as a storyteller, I’ve learned when to move on, how to productively work on something else, some other part of the story, or a different project entirely, until inspiration strikes! Or I might switch storylines around and entirely avoid the part I was previously stuck on! I try to be forgiving of myself—maybe there are rough spots that I set aside to flesh out later! Things don’t have to be perfect in the first draft!

The most important part of the process is staying true to the core of the concept, the heart of the story, and letting your decisions flow from that. Don’t sweat the small stuff at first. Go where inspiration takes you!

I went through dozens and dozens of designs for Doodleville’s cover – I really wanted to capture the magical way that art springs to life in the book, and I wanted to show off lots of the doodles! But there are sixteen of them, PLUS Levi the Leviathan, plus Drew, and then all her friends and THEIR characters! My editorial team gave some great suggestions about how we could fit all of them onto the cover, so I guess the thing I like most about the final result is that we squeezed more than two dozen characters onto a cover that is hopefully eye-catching and fun!

The two graphic novels I’m most excited to read whenever I get my hands on them are Trung Le Nguyen’s THE MAGIC FISH and TWINS by Varian Johnson and Shannon Wright!

I recently finished N.K. Jemisin’s Broken Earth trilogy, and I thought it was an incredible accomplishment. It’s definitely not for kids, but I think that older readers will really get a lot out of her thoughtful and heart-wrenching exploration of how racism and structural inequality shape societies. And what hope there is for them to find redemption or initiate positive change.

After that, I’ll be working on DOODLEVILLE Book 2! I have an awesome arrangement with my publisher where I’m switching back and forth between these two ongoing series—so I should hopefully have a new book out every year, alternating between DOODLEVILLE and THE CARDBOARD KINGDOM!

I’ve recently had a lot of exciting calls about adaptations of my work, but I’ll have to wait and see if those come to anything! Having a book deal is fairly straightforward – a publisher offers to publish your book after you finish it. Awesome! But movie and TV deals are different – maybe you get someone interested in your project, and maybe they are able to finance it, and then maybe someone actually produces the show, and then *fingers crossed* it finds a distributor? So, there are lots of exciting possibilities, but there is a lot of uncertainty, there’s a lot of waiting, and there are lots of opportunities for things to go off the rails. I try not to get too caught up in all of that and just stay focused on making more books! But still… fingers crossed!!

Drew is the main character of DOODLEVILLE, and she really goes through it over the course of the book. She endures some difficult ordeals and struggles with feelings of doubt and guilt, eventually getting to some pretty dark places. Those were challenging scenes to write and draw, particularly because I relate so deeply with Drew’s journey! However, I knew that she would eventually make it through with the help of her friends and family, so it was worth it!

Also, I have to admit that those difficult scenes were also some of the most compelling ones to draw because they involve some truly mind-bending dream sequences that might be my best comics work ever!

So, my very favorite part of making a comic is what I call “The Doodle Draft.” Once I have a pretty good idea of the whole story, I start drawing a readable rough draft with loose art, panels, and lettering. I draw it as quickly and efficiently as possible, but with the idea that anyone could read the draft and clearly understand what’s going on and emotionally invest in it. It takes a few months of work to do that, but it’s a whirlwind of creativity! All the moments that have lived only in my mind finally come to life on the page—some of those might struggle and flounder, while inspiration  might strike in unexpected places, and entirely new scenes spring out of nowhere! It’s really exciting, and once the full draft is done, my editor and I can really dig in to make substantial revisions and make the book the best it can be!

I’m really interested in making creativity accessible to kids and, on a larger scale, addressing the structural inequalities that prevent talented creators from attaining careers in publishing and the arts.

When I visit schools and talk to kids, I try not to talk about my own work for too long before I turn it around on them, saying, “You can do this, too!” I point out that the kids in THE CARDBOARD KINGDOM make all their cool costumes out of cardboard, and I encourage the kids to grab some boxes and create their own amazing characters! I try to break down my own drawing process to demystify what it means to make comics. I bring stacks of comics that kids have drawn and shared with me-- I hold them up and tell them, “Kids like you made these! Look how easy it is to fold and staple some pages to make a book!”

With Doodleville, I hope to do collaborative drawing projects with kids, showing them how they can bring their own characters to life and share their stories through drawings and comics. I will be releasing lots of YouTube videos showing how to draw many of the doodles in my book, and I’ll give pointers on creating original characters, too. I don’t want kids to look at my books and think, “I could never do that!” I want to spark their imaginations and see what happens!

I feel so lucky to be in the early stages of a career in publishing, but I acknowledge that there are huge questions about equality and representation within the industry. Being a graphic novelist has been a lifelong dream of mine, and I want to make sure that everyone has a chance to attain their dream jobs in publishing or other creative fields.

The publishing world is incredibly complicated, and there are huge barriers to entry. Lots of incredible folks are trying to break down those walls, to make the industry more transparent and more accountable. In comics, two creators who stand out are Gale Galligan and Nilah Magruder—I strongly encourage any aspiring cartoonists to check out their respective twitter feeds (@robochai and @nilaffle) for the amazing mentorship opportunities and resources they’ve been offering.

I’ve tried to be approachable and transparent about my own experiences, and I’ve experimented with different mentorship arrangements of my own! Right now, I’m doing “portfolio reviews” where I will give free feedback on anyone’s comic work. (Folks who are interested can submit via this link: https://docs.google.com/forms/d/e/1FAIpQLScVuBaUUzhhJRdC_H8bYcL69nP7VWUU0TlYzmkNhnahmhqcUQ/viewform?usp=sf_link )