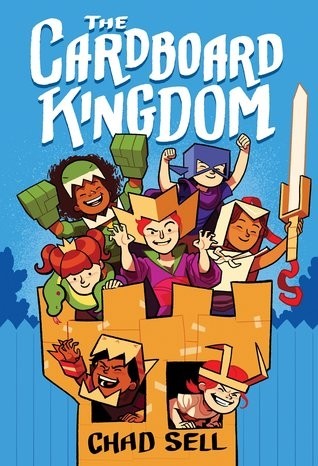 Welcome to a neighborhood of kids who transform ordinary boxes into colorful costumes, and their ordinary block into cardboard kingdom. This is the summer when sixteen kids encounter knights and rogues, robots and monsters--and their own inner demons--on one last quest before school starts again.

In the Cardboard Kingdom, you can be anything you want to be--imagine that!

I love creativity. I love stories *about* creativity and imagination, especially the unfettered power of play and make believe. That’s what THE CARDBOARD KINGDOM is all about! When a child is dressing up as a character, what are they working out about their own identity? Does their costume reveal some new aspect of themselves, or are they masking something they prefer to keep hidden? I wanted to explore that question in a wide variety of different stories, so that’s why I sought out my group of ten collaborators to help populate our Kingdom with so many wonderful characters!

Wow, that’s a tough question! We’ve got a HUGE cast of characters in THE CARDBOARD KINGDOM, and I really adore all of them! However, I certainly relate to The Sorceress the most – Jack is a young boy who dresses up as a beautiful sorceress, and that character emerged from my own interest in drag queen culture, how young queer kids can use costumes and creativity to transform themselves beyond traditional boundaries of gender.

THE CARDBOARD KINGDOM’s title has been bouncing around in my head for many years, while the book has gone through many iterations and dramatically different approaches. The idea to follow numerous different kids throughout a neighborhood as part of an epic creative collaboration was a much more recent development, and it was the crucial step in making this graphic novel a reality!

There’s a really powerful heart-to-heart between Jack and his mom late in the book that I hope will be meaningful to a lot of young fans. It’s while Jack is trying to watch a show on TV called “Celebrity Pet Makeover,” which doesn’t even sound like something I had to make up!!

I’ve learned that writing is very hard, and it’s okay to get some help with it!

I really adored The Prince and the Dressmaker by Jen Wang, which came out earlier in 2018! And Be Prepared by Vera Brosgol was wonderful!

My favorite comic of 2017 was probably The Witch Boy by Molly Ostertag. I thought she did a fabulous job of creating an intriguing, magical world and exploring gender non-conforming characters within it! My favorite novel of 2017 is definitely The Book of Dust by Philip Pullman, which completely transported me into a world I never wanted to leave.

I’m hoping that my next few years will be spent busily working on a mix of new comic book projects – some solo stuff, some collaborations!

My superpower is... daydreaming. It’s given me so many new worlds to explore, and it’s been the source of so much of my creative work! But like any good superpower, it also has its drawbacks: sometimes it’s more fun to get lost in your imagination rather than deal with everyday stuff!